I recently bought a gaming pavilion with an 8750H and a 1060 3GB that was hitting 100c at times.  HP wanted me to send it in, but that would have put me past the 30 money back time period, so I decided to either fix it myself or return it, and this is what I did.  First I uninstalled ALL of the HP programs including cool sense.  These programs were causing the computer to work harder at startup and idle.  I also did a general windows cleanup by uninstalling all unnecessary programs or disabling their auto startup, as well as disabled unnecessary services.  Went a step further and disabled certain tasks from task manager.  Just Google Windows 10 performance tweaks for more info on that topic.  I bought a laptop cooling pad, but results from that are negligible.  Then I did the undervolting thing using Intel XTU. I started on -0.150mv, which seems to work fine and that's where I left it.  Another thing that is important is to click the battery icon and simply choose better performance as opposed to max performance. You still get max turbo when needed instead of max turbo all the time.  With these changes, I brought max CPU temps down from a sketchy 100c to a more comfortable 92c-95c.  Finally I ordered thermal interface material from Amazon.  I wanted to get Thermal Grizzly Kryonaut, but I wouldn't get it until Xmas, so I ordered Cooler Mastergel Maker Nano.  Opening this new laptop and getting under the heatsink, which is a unibody design that covers CPU, GPU, and other components was the sketchiest part...but clearly the most effective in the end. Since then, my CPU has not gone over 82c and my GPU hasn't gone over 72c.  Stress tests I use are prime95, Superposition, Shadow of the Tomb Raider benchmark, and general gaming with Madden 19, GTA5, and other games.  I will say that the CPU and GPU chips are not surrounded with delicate components, so I didn't feel intimidated to use more TIM.  I've also used the "pea" method in the past, but both these chips are rectangular, so I used a line for both, with obvious positive effects.  I'll post back if anything new develops, but so far things are looking good.

DOOD!  I am so sorry that I didn't reply sooner.  I didn't even notice there were replies to me until now.  Anyway, yes!  My idle temps are right around 27C - 40C depending on ambient temp and current running tasks that are happening in the background.  In the bios there is a setting labeled "fan always on"  disable that and save the bios settings, and then the fan will start briefly during boot up, but turn completely off until temps hit roughly 55C.  I typically watch movies and web browse without the fans coming on.

I send mine in service also, change the cooling paste, check fans, same thing here, on fan blows higher than other. usually left blows less than right side.

I spend many hours with customer service and no result, it's just a bad build by HP, that we pay for it. Also i have an extra stand with fans for the laptop , for a better cooling and there is no difference.

For sure in the future my next laptop will not be from HP.

It sounds like you followed the right course, and yes,  the left fan while laptop is in normal operating position is the vid card side.  EDIT**If you are typing on your keyboard for example, and you reach around the left side, THAT is the CPU SIDE, and is the entire culprit to the heat problem, and if your fan speed is lower there, then that's a HUGE (easily fixable) problem.**EDIT  So now my warranty is over, and actually never even served a purpose for me, I have done further modifications that have improved matters greatly.  When you look at the bottom of your chassis (underneath)  you will notice a grill of sorts with "teeth", and what I have done to further improve airflow into the chassis is remove every other "tooth".  Actually I have removed two teeth, then skip two teeth then remove, etc.    To remove the teeth, I first removed the cover.  Then using a flat screwdriver I would insert in desired location and simply twist to remove the teeth.   I'm guessing that I'm getting at least 10% better airflow, but don't have definite numbers.  Next is rather odd, but worked very well for me and demands much explaining.  My heatsink was warped...I know this, so I approached it from that angle.  I took a fine grit sandpaper (2000 and up)  and used a flat surface to "plane" and buff the heatsink contact points.  Then I took 0.5mm  15x15 copper shims, made sure all contact points were well buffed, polished, etc.  then used Thermal Grizzly Kryonaut on all contact points (thats important).  So paste on the heatsink, then place copper shim on the pasted heatsink.  Then paste on the shim, then prepare for mount, but you must compensate for the additional height!  The way I did that was to purchase 0.5mm silicone pads for the surrounding components, and an important thiing I learned in all of this is that you don't want to skimp on the quality of things.  If you spend what amounts to 50 cents more for a normally 2 dollar item, then just do it.  The Thermal Grizzly Kryonaut is a case in point where buying the 5 gram tube for 20$ is totally worth it.  I used 2 different pastes before.  First it was Cooler master nano maker something or other and that worked good for like 2 weeks then temps creep back up.  Then I tried Gelid, and that didn't seem very good at all.  The Kryonaut lasts and lasts and I totally recommend it.  Ok so now there is something else thats a bit odd, that that is simply adding mass to the sink, and this has been the most effective at stabalizing temps for hours of gameplay on my Oculus Rift, and I came across this by mistake, but I'm telling you, this is cheap, easy, and effective.  You shall see.  I purchased a couple of inexpensive heatsinks for my M.2 Pcie  SSD on an unrelated mission...Well two arrived and I can only use one on the SSD, so I simply laid the other one right on top of where my CPU is...on top of the sink.  Now there is a very tight squeeze when putting the case back on, but I'm kind of at the point where I feel ok forcing things in and what not.  I will admit there is an almost uncomfortable "tightness" with the whole setup now, but if one is too uncomfortable, one can easily sand down the SSD heatsink to desired comfort level.  So...with all this said and done, I play Skyrim VR with about 30 mods and settings at the low end of medium with various tweaks and whatnot and never hit 92c..even after 5 hours of steady play.  And that brings up another important aspect of it all...TWEAKS,  and what I'm talking about is tweaks to the OS.  And there are some VERY important ones to apply...like shutting down Cortana, and limiting Windows Update from running all the time.  That SOB is responsible for a lot of heat.  Too many hard core, in depth tweaks to list now, and I was going to do a video on tweaks like limiting the logging that happens and a whole bunch of stuff, but if you're interested, I'll just post a step by step here.    You know, I see laptops even a year later with inferior hardware going for $200 more than what I spent on this...i7 8750h GTX 1060 3GB MaxQ, etc.  So although this thing has been a pain in my ass, I seem to now have a normally functioning gaming laptop that does VR out the box for $750, that I paid a year ago.  I think future buyers can benefit greatly from my past trials and tribulations, so HP should really send me a GTX 2080 model...hahaha!

I have this processor as well, and after seeing how simple a picture works better than words, here is my info.  Keep in mind I use Throttle Stop for undervolts and whatnot, and HWinfo64 to keep track of it all. Edit** One discrepancy with the data is the PL2 power limit readings.  Also known as Turbo Boost Short Power Max, which shows 90w.  This is not true, and HWinfo64 must be unable to read the modified value of 70w, which is evidenced by the setting within Throttle Stop Turbo Power Limits Window.  I believe this setting to be functional, but you'll notice a clamp feature that I am not using, so...I dunno, it's working like a champ now, so I don't question it. **Edit 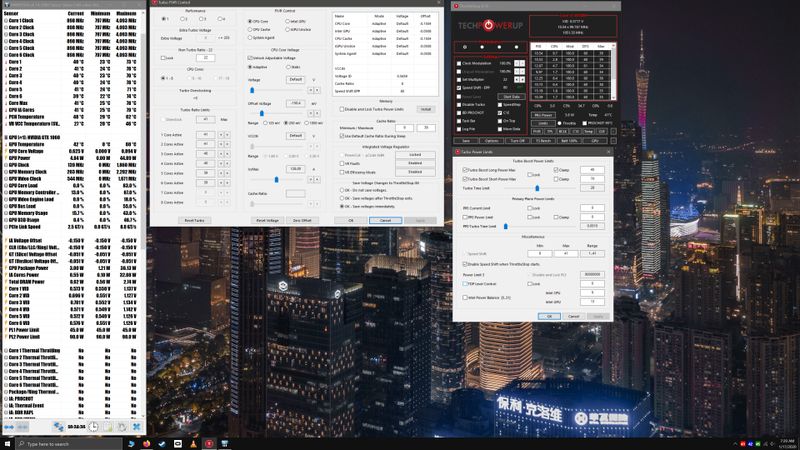 You said it well !  i7 does wrong. What i meant to be is that HP knows it, and selling this kind of configurations, knowing will get hot is just selling

They should stop it , but it's on market!

Why that i7 is that hot and if it gets that hot they will warranty it! they fit , they should take it for 5 years!

i dont mind graphic card, but CPU , hp or intel should come forward!

Can you make update to cool better CPU and GPU ?