It has been a while since anyone has replied. Simply ask a new question if you would like to start the discussion again.
Common problems for Battery
We would like to share some of the most frequently asked questions about: Battery Reports, Hold a charge, Test and Calibrating Battery . Check out this link: Is your notebook plugged in and not charging?

hi everybody, first of all, thanks in advance to whoever is going to read it out and thanks with a hug to the ones that are going to reply to me (being the NOOB

of course) with their expertise. Cheers✌🏻 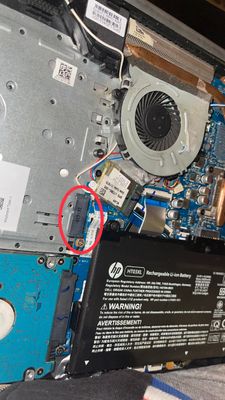 1TB mechanical hard drive (having no running OS currently cause recently I was running dual boot ubuntu+w10 and a w10 reset failure eventually deprived me of having any of them. And now due to get table windows won’t get be installed upon the disk until total format {and I have like 600 GB of personal data which can’t even be risked so that to be lost.

so after Microsoft failed to help me out and hp only had a yearly warranty which was completed two years back, they don’t even bother to listen up to me.
So, the only option left for the NOOB was to dig out into the internet world which I did. And during this research, I just found out that there is an entire population in the world (basically all others except me) that don’t have to wait for an hour to have his/her iPhone's photos data being transferred to their laptop, and that too after pressing the RETRY button for more than a dozen times. And that population has an advanced chip installed upon their systems called: SSD. But upon further research it almost made me jump off a cliff but again, the NOOB kept trying. And before the NOOB’s system crashes I decided to ask you guys for help. Here's what I have found so far;

my notebook supports adding up an additional drive alongside the mechanical drive as it never had a CD Rom but has a connector (attached the pic) which can be used to either connect a normal 2.5” SSD or the NVMe M.2(way faster and I have chosen so far) as it does support PCIe.

so what I am confused about is what amount of storage would be enough for it so that to work flawlessly alongside 1TB opt. Drive. And is there a limit to storage size that a pc can handle these SSD’s or is it's irrelevant and the only thing matter is the kind and type? (kindly advise me of an economical but good reputed company and the right storage size. I do transfer, not many but somewhat of iPhone 4k videos and photos frequently, and sometimes edit them. Besides that mainly use it for  online movies and series while being attached to my 55”4k HDR TCL android Tv (as a monitor)

and last but not the least, what do I require for setting up the SSD other than the SSD itself, or if it would just be connected into the slot straightaway like a USB.

and is there a way to fix my current hard drive without the risk of losing data being involved at all?

The slot you have circled in your screenshot is to connect the optional DVD drive to.

That is the only device that can go into that slot.

Take a look on the right side of the battery.

Since your notebook has an AMD Ryzen processor, there should be a M.2 slot to add a NVMe SSD.

An M.2 slot is a bit smaller than the slot you circled.

please tell me this is the one we are looking for; 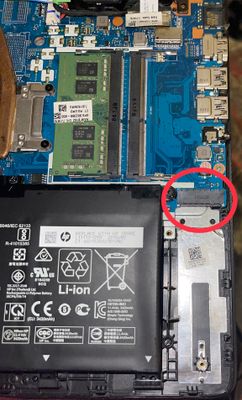 Yes, that is the M.2 slot where the NVMe SSD goes.

And to be clear, you want to install the OS (Windows) on a PCIE/NVME M.2 SSD. Remove the mechanical hard drive, go to the Microsoft Media Creation Tool site and download a Windows 10 installer to use to put Windows back on your laptop, but on the new M.2 SSD rather than the hard drive. Use the original hard drive to store your iPhone downloads. I suggest something like a 512 gig NVME M.2 so you have enough room for your dual boot. Like this:

Economical but much faster than a mechanical hard drive. Once you get Windows reinstalled on the new SSD, plug the mechanical hard drive back in and we can walk you through diagnosing its condition and recovering data from it. Assuming it is good, take the Windows system files off it and continue to use it for file storage. If you set it up right its available to both Windows and Linux that way.

Though i haven’t got M.2 yet but i am about to.., very soon.. but i  did have a Hard disk from an old laptop (500GB). So, i have got my windows back and running by installing it upon that disk.

Also, i did get the hard disk reader/enclosed case and can be connected via usb. So, i think we should be troubleshooting the hard disk to save my important data alongside of me being getting the M.2.

Currently, (on windows) the disk only shows a partition of 100 Gb which i recently created by formatting the free space via live ubuntu installation usb. I do have access to all of the disk data but only in ubuntu..

You formatted it to a Linux file system. Linux will read a Windows file system but not vice versa.

I did format!! But not the Disk itself of course(if I had formatted the disk then wouldn’t the data already be lost and not be shown upon anywhere on either operating system), formatted somewhat of unallocated space, created a partition for installing ubuntu on it.  There are still two accessible and intact partitions being shown via Ubuntu live USB. One is the C drive that contains 400 GB of windows data and the other one is having personal 450GB data.