I'm looking to add a 500/512 Gb SSD to my HP Elitebook 850 G3 and I'm having a heck of a time confirming the right product number so whatever I order, works when I install it. Ideally, I would like to replace the current [spindle] hard drive with the SSD but finding the proper Product Number is a challenge.

Some Product Numbers I've found that "might" work are 2YY46AA#ABC & 2YY44AA#ABC. But I'm not sure if either or both or neither of them (and it's a totally different product number) would work. At least the pin configurations of both of those are the same. I did stumple across a possible "part number", vs. "product number" of 823959-001 BUT the PIN configuration on that COMPLETELY different than the 2YY46AA#ABC & 2YY44AA#ABC Product Numbers.

@Skip- wrote:
... I would like to replace the current [spindle] hard drive with the SSD but finding the proper Product Number is a challenge.

You can use many standard 2.5" SSD's from many vendors around for example

Note: You can use HPSA to see what is the model/product number.  HP Elitebook 850 G3 is a family therefore you can find many models/products around. For example 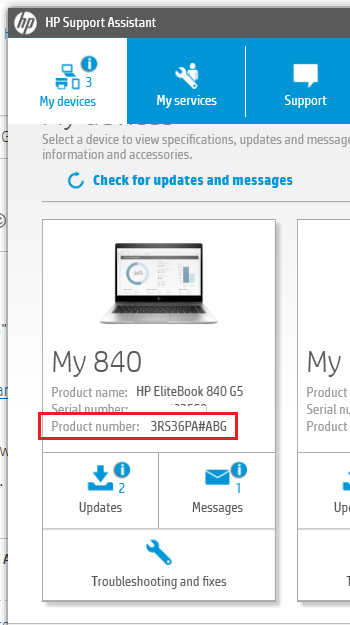