- Browse locally to the extracted <sub folders> of c:\SWSetup\sp135651 and try each provided driver

In both cases (Realtek and SunPlus), the update did not proceed: 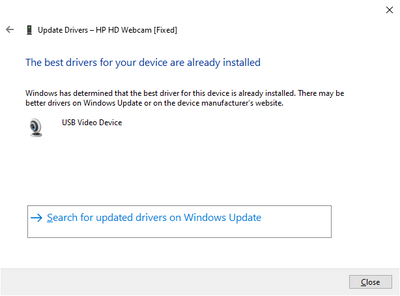 Is there a way to force a driver update, assuming that is desirable?

How to Update Drivers in Windows

Thanks ... but it still fails, for a different reason: 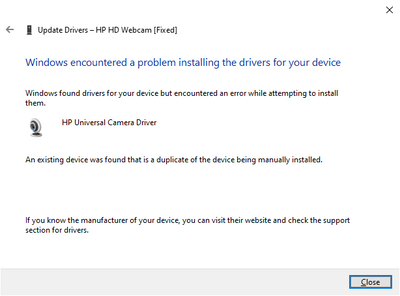 I tried a couple of different driver folders and the same result.

Surely there is a way to identify the original driver and its source kit?

Do you have valid HP warranty ?

As mentioned in my original post, this is an HP EliteBook 8770w. It was purchased in 2013. No warranty.

As mentioned in my original post, this is an HP EliteBook 8770w. It was purchased in 2013. No warranty.

After all that effort, I'd say we're not getting the camera 100% functional. As workaround please buy external <USB wired> mini webcam that you can clamp to the screen.

I appreciate the workaround, one which I have thought of. But the problem is not hardware (the camera app shows the still photo screen actively reflecting image movement in real-time).

It's a driver issue that has been solved by others by reverting to an earlier archival driver. That's what is clearly indicated by the post from Ctrl77 here, which says:

"I realize this thread is 3 years old but it was the first google hit and the advice here applied to an HP ProBook 4540s laptop. "HP HD Webcam [Fixed]" was initially working after Windows 7 was upgraded to Windows 10 but after one of Microsoft's perpetual patches it simply stopped working. I tried updating the driver to the latest on HP's web site, I tried rolling back the drive, I tried deleting it, etc., etc.. No dice. What worked for me was removing the device from device manager while deleting the 2015 driver, refreshing, removing the next device from device manager while choosing to delete the 2014 driver, refreshing, then forcing the driver to go to "USB Video Device". After it installed that, it appeared again as "HP HD Webcam [Fixed]" however the driver reported as being one from 2006 by Microsoft with version 10.0.18362.1. Success! So again, the solution for me was forcing it to a generic "USB Video Device"."

Granted, the device is different, but the issue is not. If I could find the identified driver ("one from 2006 by Microsoft with version 10.0.18362.1"), I could at least see if that fixes the issue.

Thanks. No joy. In fact, it even broke the still image part. So, I installed the latest Universal Camera Driver. That required a reboot, which, when it came back, asked if that installed driver should be removed, with a default Yes. So I removed it, and rebooted again. The driver now is dated 21-Jun-06 Version 10.0.19041.1741.

Strangely, after that reboot, starting the Camera application, it started in video mode! Clearly, it is not a hardware issue. BUT, when I switched to still image and then tried to switch back to video, the video failed as previously. Subsequent attempts to go to video continue to fail as previously. Bizarre!

I think I'll have to go with the attachable external camera as needs be.