I need some help please - I know the GPU Throttling issue was discussed a lot and I have experience with my previous HP Envy 13.3 - basically selecting Performance profile from HP Command Center solved the problem, but now I have a 15 inch HP Envy x360 on which HP Command Center doesn't seem to change the throttling temperature at all. I also read that for the HP Command Center to work the HP Support Assistant should work which it does.
Also recently the BIOS was updated from F.23 to F.26 - I have found how to download the old BIOS, I will try it later.
I tried both Nvidia Game driver and the one from HP - no difference.
In summary when I play a game the temperatures go up to 70-72degC, then stay like that for 5-10 min and then throttling starts and GPU clock drops to 190MHz and never recovers, even when temperatures drop below 60degC!
Below is a screenshot from MSI Afterburner - with fast clocks 1.8GHz the temperature exceeds 77degC and no throttling, then reducing the clock to 1.6GHz and temperatures drop slightly to around 70degC and after a minute the temperature limit kicks in?
Having done more testing everything seems OK up to 66degC, anything higher than that triggers the temp limit, weird? 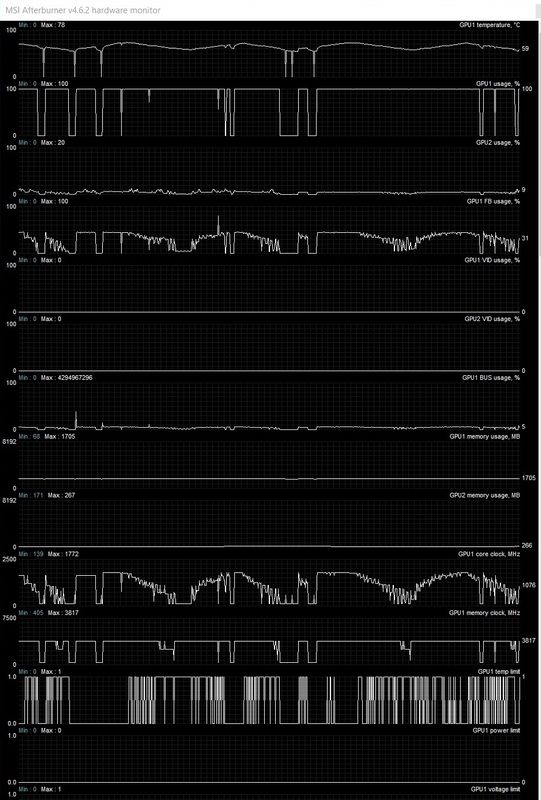 Many thanks in advance to anyone who is able to help!

I downloaded GPU-Z and in the Advanced tab it shows 92degC current temperature limit, with minimum 59degC and 94degC default and max.
When I play a game and click Refresh on GPU-Z it shows  the temperature limit dropping to much lower numbers,  e.g. low 60s degC.
I also read somewhere that HP Cool Sense might be affecting this so I turned it off, but nothing has changed.
I tried uninstalling the Energy Star app but no difference either.
So the question is what causes the temperature limit to drop even if the default setting is 94degC?
For me the optimal figure would be around 75degC, but dropping down to 59degC and especially the clock down to 139MHz (why not to 700-800MHz??)  makes the card unusable (I will perhaps be better of with the integrated UHD 620).