So, I had an issue a while back with my touchscreen malfunctioning and in my efforts to figure that out and resolve it, I seem to have created another issue with my Synaptics touchpad. I used to be able to use the multi-finger gestures, such as the two-finger scroll, pinch to zoom, etc., prior to all of this, but now I am not. I've tried updating the driver multiple times, including uninstalling and deleting what I currently have and replacing it, but nothing seems to work. The settings for the touchpad seem to be missing some portions: 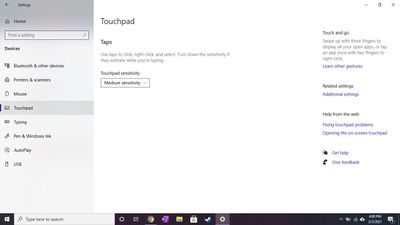 There's nothing under the touchpad sensitivity drop-down menu. I believe there's supposed to be the multi-finger gestures settings there, in the big empty space...

I've tried looking up ways to fix this, but I can't find anything. Can anyone offer any suggestions for fixing this? I really want my two-finger scrolling back... 😞

Hello Echo_Lake! In answer to your questions:

-No, there wasn't any updates that had occurred recently.

-I believe I made some changes when I was trying to resolve a different issue, though I don't think any of those changes happened in my computer's "Settings" page. Unfortunately, I don't remember everything I did, but I do remember going into the Device Manager and updating the touchpad driver (though it always said it was up to date) as well as uninstalling the touchpad device. I did that several times, actually...

-I've been sitting on this problem for a  few months now. I think this all happened back in November 2020.

If it helps, the problem I was previously having before this was my mouse cursor was "stuck" on one part of my screen. I could kind of move it a little, but it would always immediately jump back to that same spot it was stuck in. I THOUGHT it was a touchpad issue, which is why I was messing with the touchpad stuff at all, but I ended up discovering that it was a touchSCREEN issue instead. I just turned the touchscreen feature off, since I don't really use it anyway, but now my touchpad multi-finger gestures are gone. (They don't come back when I re-enable the touchscreen stuff, though.) So, I clearly did something to mess up the gestures when I was messing around with stuff, but nothing I've done to try and restore the gestures has worked.

While doing the recovery there is an option to back up your personal files. If you have not previously done one now is a good time.
Restoring Files that were Backed Up Using HP Recovery Manager (Windows)You can also contact HP support for assistance. They can remotely access your system to help alleviate difficulties: www.hp.com/contacthp/