- My Wifi card has disappeared and my wireless network does not show up as a choice when joining a network.

2) My HP support (Discover My PC) lists the network card driver choices for my notebook are as follows:

3) There is no Wireless card showing up in my VISIBLE Device Manager Network choices.  However, my WiFi card does show up as a HIDDEN choice and it shows up as the Ralink RT3290 802.11 bgn; 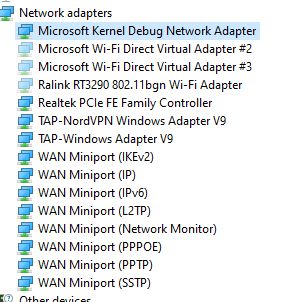 Based on Device Manager, my Add/Delete App listing and the HP Driver Choices, I assume I have the MediaTek/Ralink RT3290 WiFi card that everyone's posts seems to complain about.  Oh Goody.

All that being said, my wireless connection disappeared from my network choices sometime in the last 6-8 months (I also have a wired LAN connection, which I use most of the time and which I'm on now).  I don't use the WiFi connection at home or at the office, only when I travel, so I didn't notice it was gone until today when I was doing some "housekeeping". I remember using it last Thanksgiving on the road, but that's time I can remember using it.

I did download and "re-install" the HP supplied Realtek and MediaTek drivers (although I didn't uninstall anything before doing so). I also went to a Microsoft site and downloaded a couple of Realtek/MediaTek CAB driver files labeled for Win 10 and I attempted to install them (no errors, so I guess I'm good).

As of now, no change,  No visible WiFi adapter, no visible WiFi network connections; no WiFi.  (I've done the whole reboot everything I own in the house routine as well as run all of HP's "Help" routines.  No help).

Any and all help is welcome.  And if I have to, I'll replace the card (assuming I can).  Thank you in advance.

A quick addendum.  I didn't think to go to my Event Manager and check the log.  Here you go: 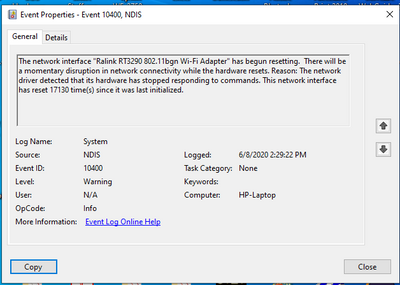 My Event Viewer goes back to the first part of June, and there are solid NDIS errors of this nature between then and now.  Looks like there are thousands of these based on the error message.

The Ralink wifi adapter is not supported on the newer releases of W10.

That is a very common problem where the wifi and/or bluetooth completely disappears from the device manager.

There is no fix, other than to replace the internal wifi adapter or install an external USB wifi adapter.

Open up the notebook and let me know how many antenna cables are connected to the Ralink wifi card.

The number of antenna cables will determine what card you can replace it with.

Here is the link to the service manual, where you can find the wifi card removal and replacement procedure.

I will open the machine up today and I'll let you know what kind of antenna configuration I find.

Thank you for your help.