If I install 4GB of ram in this laptop (I know HP doesn’t support it), the memory will test ok in the BIOS but Vista x86 will blue screen with PFN_LIST_CORRUPT.   If I reduce the memory to 3GB (1 GB in slot closest to MB and 2GB in the other bank), Vista will run stable.  Happens with G-Skill F2-5300CL4D-4GBSQ or Kingston KHX5300S2LLK2/4GR RAM.

I've tested this with BIOS versions  F.34 (Current) and F.33.  It would be nice if HP Compaq would update the Insyde BIOS to correct this issue.

I have tested all of this memory with Memtest86 and have found zero errors.  As such, I believe this limitation to be a result of a BIOS bug or a poor memory timing/voltage configuration setting in the BIOS that is not accessible to the consumer.

All of the operating systems will run if 3GB is installed (1GB in the slot closest to the mainboard and 2GB in the other slot - Note: OS will crash if 2GB is in slot closest to Mainboard).   I have three of these notebooks each having 3GB of ram that run rock solid stable. I am using Kingston Hyper-X KHX5300S2LLK2 DIMMs.

While I understand that HP officially only supports running this notebook with 2GB of RAM and as such is under no obligation to address this issue, it would be nice if their engineers would fix it in a future update of the BIOS.

If your running a 32-bit OS, 3GB is close to maximum amount of memory that the OS can use (any thing more is a waste).  However, a 64-bit OS can take full advantage of all 4GB.

unit maximum memory is up to 2GB only. Even it will OK using 3GB but sometimes you encountered BSOD or system will sometimes hang-up.

Approx 3-4 weeks ago, I upgraded each of the three notebooks to 3GB of RAM.

I also replaced the hard drives with Seagate Momentus ST9320421AS 320GB 7200RPM 16MB Cache SATA2 ( 3.0Gb/s) drives.  The original 160GB drive was SATA1 (1.5Gb/s).  The Intel Matrix Storage Console shows that the new drive is running at SATA2 and the Windows experience index now reflects a 5.9 for the hard drive.   The new drive is maintaining a consistent temperature of 39-40 Celsius even though it’s running at 7200 RPM.

Since upgrading these systems, each has been heavily used for production work for 4-5 hours each day (excluding weekends).   During this time, we have yet to see a BSOD, hang or any other type of instability.

That said, I’ve also wiped out the HP Windows Vista installation that was overflowing with garbage software (which is fine as the preloading helps HP keep prices low) and performed a clean install of Vista Ultimate x86 using all of the latest drivers.  This includes using the Chipset, Graphics and storage drivers downloaded directly from Intel.  The remaining drivers I downloaded from HP.

Maybe the occasional problems that you are referring to are a result of HPs install image.  They could also be a result of bad or low quality memory.  Either way, I can only report that my experience with this model does not reflect that of yours.

Again, I am not upset with HP about this (Although it does color my view of their engineering prowess – It’s not an Intel Chipset and CPU limitation).

Because I did my research first, I purchased these knowing that HP only claimed support for 2GB of RAM in this system.   However, you would never have found anything at the point of purchase or on the packaging to indicate this.

It would be “Nice” if HP would attempt to correct this issue in a future BIOS update.  It would also be nice if HP would provide an unsupported avenue for enthusiasts to obtain a BIOS where the advanced chipset configuration settings were accessible.  I would think that many would find this endearing.

Just a quick thought, maybe they don't put these details on the packaging because they assume the "average" customer isn't tech-savvy enough to look for that kind of info. Although I am sure I have seen the phrase "(expandeable to xx)" or "(upgradeable to xx)" appear on packaging or advertising for computers, next to the description of memory. I'm not sure I've seen it for this series, though.

IMO, the mfrs are behind the curve as far as their assumptions about the tech-savviness of their customers. Maybe it's because I spend a lot of time online so I encounter people with more experience, but I think that nowadays a lot more people who do not work in computers or IT are more tech-savvy than in the past. Not everyone can crack open a case and replace a card, but quite a few people understand hardware specs and can make intelligent comparisons, much more than, say, 10 years ago.

Still, your quest to see how far you can push the envelope with the C700 series is really only for the expert user, so I'm not surprised that this would be the kind of detailed information shared amongst people who really know exactly what they are doing. Good luck!

HP Recommended
Hello, I have the exact same problem, but mine is Presario C762NR and I have latest BIOS update F.34, I had F.32 and F.33, and I also have 2x 2GB Kingston HyperX for 4GB RAM, I get booted into the desktop until it freezes and weird colors/BSOD. I edited the BCD Registry and reduced physical memory by 128MB to make 3900MB, Vista x64 booted but only used 1GB out of 4GB. BIOS/Vista x64 both detect 4096MB RAM and VRAM increases from 256MB to 384MB. Right now I'm running 2.5GB with one HyperX 2GB module and Hyundai 512MB module with no problems. Wish there was way to fix this 4GB memory problem 😞
0 Kudos
Highlighted

I have the C762NR laptop as well. Repaired it from when a friend completly destroyed every part basically.

I have 2x 2GB chips of memory. I know it states 2GB max Supported but is there a custom Firmware for the BIOS that will allow more then the 2GB? I am a heavy gamer and would like to utilize all my memory.

Okay- So I can confirm, 3 gb is the most this series will support. There was one guy on one forum somewhere with a c762 (I think), who reported 4 gb stable, with a clean install of vista 64 bit. Other than that everybody maxes out with 3 gb. Because the bios recognizes 4096 mb, and the chipset they put in these things in other series work with 4096 memory, it is a design flaw in the computer. I have tried ubuntu 64 bit, no boot, with 4, but no problem with 3. I am running out of ideas, and unless I can figure out a c700 series notebook that ships with 4gb, and has nearly all of the same specs, I am not even going to try flashing my bios to a different system bios. 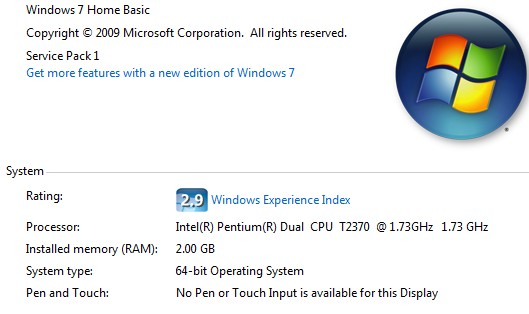 what is the max upgradable size of ram for my system.

I read somewhere that as long as you install no more than 1GB memory stick in the slot next to the MB, then you can use either 2GB or 4GB memory stick in the 2nd slot if you are running a 64 bit OS. Has anyone tried running 5GB of memory this way? It appears from all that I have read 3GB will run stable with no more than 1GB in the 1st slot, but not sure about using a 4GB stick in the 2nd slot will give you stable 5GB for 64 bit OS. I know it is better to run a 32bit OS if you can only use 2GB or 3GB of memory unless you have an SSD HDD maybe? I want to try either 3GB or 5GB if 5GB will work, but that is too much cost and trouble without verification, so please let me know if anyone has run a 64bit OS of Win 7 or Vista with 5GB RAM stable, 1GB next to MB and 4GB in slot furthest from MB. I am really curious. I would like to do this along with the max processor which HP says is the Intel Core 2 Duo T8300 2.40 GHz. I am running a slow 1.7GHz T2370 in my C762NR currently. I am also interested to know if you can upgrade the type G/B wireless card to a type N or AC and or upgrade to 10/100/1000 ethernet. I think the wireless is a plug in card but the ethernet is not. Once again I am worried the MB BIOS and chipset will limit these things?

Anyone know for sure? Especially the 1GB / 4GB memory upgrade on a 64 bit Win 7 platform?

Also, where can I buy a new or almost new warrantied Intel T8300 for my C762NR now that they are discontinued?

I don't want a warn out piece of junk from a thrown out computer!