When will the windows 10 upgrade become available for the 8460p (and 8560p)? There are no windows 10 drivers listed at all for this series and Im guessing thats why the upgrade isnt enabled.

I'm thinking of forcing it and finding the drivers myself. Anybody with any experience of this?

Ditto on this request.  I've been fighting a restarting issue where the screen blinks just as Windows 10 is booting up after the upgrade.   I had to do a clean install and encountered the same situation after I installed the Windows 8.1 64 hotkeys drivers (since Windows 10 drivers/software don't exist).  I had the presence of mind to create a Restore point for each item I loaded.

The J-Micron driver for SD card reader, the 3D drive protection sensor, the Intel Active Management Technology (shows up as PCI Serial port) and the fingerprint reader - all do not get recognized by Windows 10.  I have used the 8.1 drivers for SD card reader and fingerprint reader.  I can't find similar 8.1 drivers for the other two. (I don't need the 3D sensor as I've converted to SSD's, and the Intel function is for remote administration).

Given that the hotkeys prove catostrophic, I'm hesitant to try any others.  (I believe the problem is with the auto brightness function that comes with the hotkeys.  Other fn keys work without this installation:  the sleep button, the up/down volume, num lk, prt sc).

Windows 10 does make this old laptop sing.  It is fast.  But I'm worried something burried deep in the machine will come along and scuttle all the work I will need to put into it.

It's not like we bought the cheap stuff HP, I don't care if you mark the drivers an/or OS as unsupported but at least don't be mean...

I suspect this can be new strategy since SSD's prolonge the life of high end laptops extensively. Don't be a DELL like monster please...

Is there any update on those elusive Windows 10 drivers .   I want get a new laptop for one of my kids and I would be worth getting one of these providing there aren't major issues with the Win 7 -> Win 10  upgrade.

I would have thought resellers would have had to address this since the big corporates don't go refereshing the kit very often.

The 8460P machine I purchased just had a copy of Win 64 Professional- no HP installed software. After upgrading the BIOS and system diagnostics to the latest release and upgrading to Windows 10 from Windows 7- I have had no issues, other than the Validity Driver for the fingerprint sensor. For the later, I forced install of the Synaptics Windows 10 driver (PID 17), and have it working properly with Windows Hello.

Actually, before the Windows 10 upgrade, the USB 3 ports were not functioning- after, with Windows 10 drivers- they functioned correctly.  Purchasing any machine this old required careful testing, evaluation and some element of troubleshooting- given HP's lack of Windows 10 support for this model.

Also, upgrading to an SSD drive, relatively easy with this model, provides a major improvement in performance.

I just did a clean install of 10. Its fine out of the box. I dont have the fingerprint driver working yet but I did before on the 10 upgrade - using the Lenove dri ver technique. Will post more.

Dont bother to try the USB boot UEFI / GPT install. You will never get that working. It might work with UEFI/ DVD boot but I gave up and stuck with BIOS/MBR. The BIOS is too old and states clearly that UEFI is unstable and for developement only.

Have just bought a referbished model, I tried to upgrade to W10.

Neither wired or wireless internet will connect and the screen started bugging out to the point it was unusable. Have revert back now, but would definaly appreciate having new drivers to resolve these issues.

Naturally its not approved but then they are on the official MS repo and not one of those spammy "drivers" sites.

I have read that HP doies not support Windows 10 on Pre 2013 machines, so we are on our own by definition. It does not matter what we do (except maybe to HPs reputation, after all, Im trying to upgrade what was a top-of-the-line machine a mere 4 years ago and is still right up there in I7 speed).

After doing a 7 to 10 upgrade to get the install serial (after the next 10 release you will be able to use your 7 or 8 serial) my 10 install to a new SSD worked more or less perfectly out of the box. I used the ubiqutous Lenovo driver for the fingerprint scanner (but that driver is on the MS Repo too. The only things that dont work (thus far and I havent bothered to fix them yet) are:

2. Ericcson 3G Modem and ancilliaries. Again 8 might work but then Ive never used the device anyway.

The windows 10 repo is here:

Of course it must be opened in Internet Explorer and not, oddly enough, in the new Edge browser

Get the Hardware Id  property of the offending device. For this example I tried putting  ‘vid_138&pid_003c’ in the search box. That came back with nothing, but it was because there was no 003c. Just using ‘vid_138’ returned the lot. You will see!! After that you can just get a shopping basket of .cab files to download. Open them into directories and just install the drivers from there. In this case I happened to know that 0017 would work as I has already found it elsewhere via Lenovo. 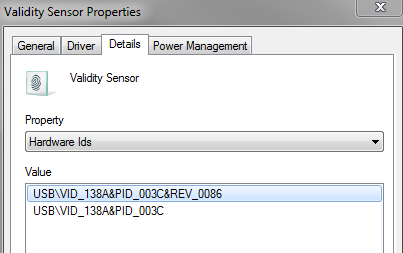 I would agree its fast.