Once again, it's that semi-annual Update-the-PC-to-the-latest-Win10-version time.

But this time, it is different -- in a significant way.

Last time, with version 20.04 (or 20H1 -- it had two names), MS presented the update as an Optional Update -- and they did this because the previous update (version 19.09) had caused so many issues by being automatically "pushed" to folks' PCs. So, they made you ASK FOR the new Update. But, they also had the decency to tell folks that if you were not being offered it, to not go after it yourself -- sound advice that lots of people ignored, to their detriment. That Update was such a disaster that MS actually blocked it for several months!

This time, while it is still an optional update, it is different in another way.

The interesting thing is, if you applied that patch, you already have Win10 v20H2 -- that's right, it has already been installed -- it has just not been TURNED ON!

Thus, when you see the v20H2 optional update and run it, you are running something known as an Enablement Package -- KB4562830 -- which does nothing more than TURN ON the udpate. When you reboot after that, you will see your Windows version change to 20H2, Build 19042.752.

That will download a .CAB file onto your PC, but you can't run that directly so do NOT double-click it. Instead, you have to follow these directions:
Rename file to KBnumber.сab (for example KB4562830.Cab)
Copy to folder C:\
Run command-prompt as admin (Right click on Windows icon and choose option). ...
Enter the command “DISM.exe /Online /Add-Package /PackagePath:c:\KB4562830.cab“

I did this on a PC that was not getting the 20H2 update and this took under 5 minutes to complete.

This is the MS thread on removed features -- you will see it is a very short list:
https://www.tenforums.com/windows-10-news/166756-features-removed-deprecated-windows-10-version-20h2...

I did this today on my desktop and the whole process, from select the update to booting to the new desktop, took less than 2 minutes -- and that is rounded up. Actually took a little over a minute.

When you do this update and are amazed by how fast it happens and recall that MS has been promising to speed up Feature Updates for years now, understand that MS did NOT speed this up -- YOU did -- by downloading the actual update to your PC days ago. The downloading and copying of new features to your Windows version was done then. All you are doing NOW is flipping a switch to turn on the new features.

While the good news is that you're not risking the disaster that was v20H1, it also means that if your PC is currently having problems with 20H1, updating to 20H2 is not going to fix those because instead of being a whole new version of Windows as it has been in the past, it's only a bunch of minor feature additions. So, any issues with 20H1 are likely to remain.

7 Kudos
Was this article helpful? Yes No
Contributors
Comments

then put it to my NAS.

This morning, I upgraded 4 machines using same one ISO file at the same time (well one after the other, few minutes apart), they are

I don't know why the Omen took longer  to upgrade, I though it should be much quicker with 32GB of RAM.

So far so good, hope no hiccup.  I have to upgrade 3 more during the week and would be few more next weekends.

On my laptop it says the version 20H2 but the build number ends in 572.

The original 20H2 build was 572 -- which, like last time, was the same as the 20H1 build, the only difference being it was based off 19042 instead of 19041.  But since these two versions have much of the same core, they have the same build numbers.

To those folks now running 20H2, MS came out with a Cumulative Update Preview last week which, if you manually downloaded the CAB file and installed it, would have incremented your 19042 build from 572 to 608.

Then, they also came out with CU this week, confusingly using the same KB number as last week, and that incremented your 19042 build to 610.

@LCP47 I don't think any one is really a wiz. but judging from your number it looks like you didn't get it yet.

So yeah,  I haven't been on my laptop for a while, so when I booted up I did the whole absent minded update thing.... realized I now have installed  version 20H2 build 19042.610, and since it was a while I went to support.hp.com/drivers to grab the updates I had missed..... now i'm getting A message saying that windows no longer supports that driver. On multiple different updates including my Intel Chipset updates. MEI, TXI, RST. How can it no longer support something new when the **bleep** Computer ACPI x64 driver is over 14 years old now!?

HP Notebook 15-BS070WM, HP Jaguar 15-BS070WM, HP 15. (Honestly I'm not sure which, because my bios matches the 1st, I purchased the 2nd, but the hardware and component's match the 3rd. After a HP put in a new motherboard and processor.) 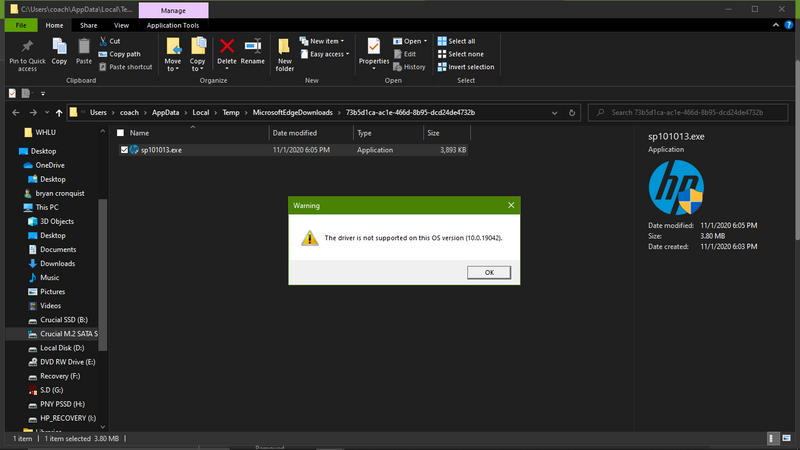 hmm that's a interesting question. I actually have no idea.

Yesterday I upgraded few more machines for my children using few different ways. One machine with Windows 10 20H2 ready and it took only 6 mins to upgrade from 2004 to 20H2.

Well I talked with windows help, the next they could do for me was tell me to rollback and wait for the fixes to roll out.

And I can only assume that unless this effects multiple other ppl, they will sit back and do nothing.

Any Ideas as to why Windows (OS 10.0.19042.630) no longer recognizes System Critical and non-critical Drivers for my HP Notebook BS070WM? Has Anyone else experienced this? Or knows how to fix it? Please anything at the moment is better then re-installation. all my system info is Above in my first comment I believe.  But for fun here it is again.

So far I have only seen mention of the Intel platforms in regard to the update. Is there any information on the AMD platforms?