Sure, observe the printer for a while and let me know if the issue is fixed.

Yeah I have no idea what is wrong with this thing, pulled it out the boxed, fired it up followed the instructions to the letter with the HP smart app thing, worked perfectly. printed like 60 pages and was all smiles.

It is a HP ENVY 5055, that is connected via wi-fi per the setup guide.

not really sure what else to do, I have offered it sacrifices, in hopes of appeasing it, but it appears I have fallen out of favor and its cold robotic heart no longer cares. running out of fatted calfs to slaughter over here, any advice would be great, sounds like the WRS123dick user above had similar issues. how did you help them defeat their adversarial printer. i sit broken and defeated awaiting your assistance. 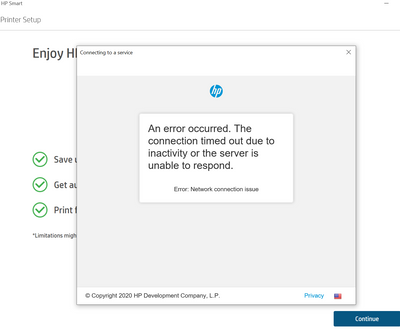 I guess this could be another problem, I took a break from fighting it and the printer says it is offline again, what is my next step here? I think it wanted me to sign in or something.

Which operating system is installed on the computer to which this printer is connected?

My printer is always going offline, and I didn't see the solution. I can get it going again by unplugging the usb, and then swearing a lot and then plugging it back in. What's the fix?

I thought mine was fixed, but it was not. I to go the same things you do.

I hope somebody comes up with a fix.

Note: Please ensure the complete product name/number for a quicker response from the community, as we need to know what we are dealing with to provide an accurate solution:

Click here for steps on finding the information we need!

Remember: Do not share any of your personal information such as serial, phone number, email ID, etc.

I request you to talk to HP support.

They might have multiple options to help you with this.