turn on suggested results
Auto-suggest helps you quickly narrow down your search results by suggesting possible matches as you type.
Showing results for
Search instead for
Did you mean:
Options
DNS72
Level 1
5 4 0 0
Message 1 of 10
349
Flag Post

I'm dealing with an Officejet 6950 which has been installed and working for around 2 years.  The device is connected to the network and works fine with all computers except this problem one.

It has previously worked fine with this particular computer - it stopped working a couple of weeks ago and I've been unable to get it going again.

The computer is a Windows 10 machine with version 1909 (it was 1903 until I updated it a couple of days ago to see if the problem would fix).

The issue is that the printer appears to be installed, however when you attempt to open the printer properties via control panel it says the driver is not installed as shown here:

If I attempt to send a test page is says this: 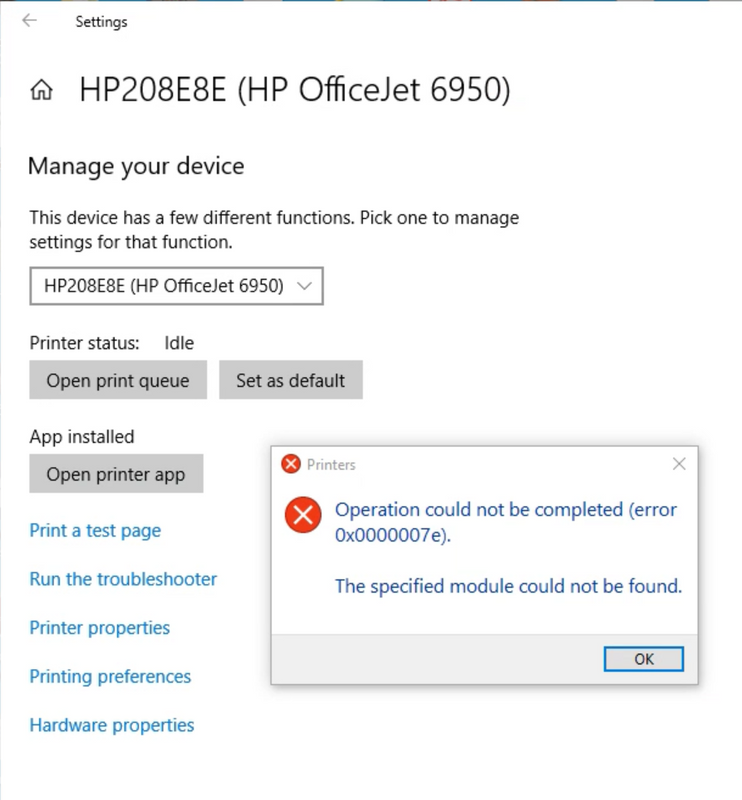 If I tell it that I want to add the missing driver, after the wizard completes it says this:

If I look at the Print Server window it shows that the driver is installed:

If I visit the location of the driver files I see this: 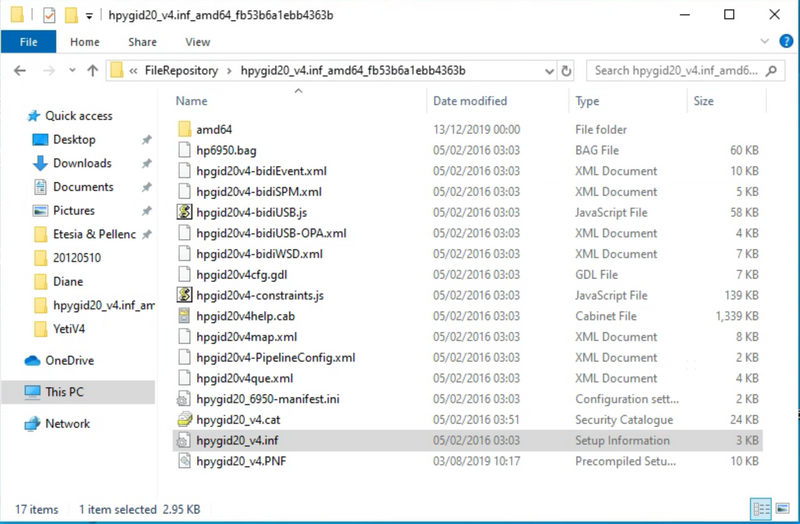 If I click on the INF file and choose INSTALL I get the expected security prompt, and when I ok that there's no error or further messages.  However the problem remains the same.

Uninstalling and reinstalling the printer driver. The printer is always detected on the network ok, and the install will complete without error - but I'm left in the same situation as now.

I've tried restarting the computer at various stages to see whether anything would "clear".

I really don't want to have to reinstall the entire computer to get this working as that's a big job considering the other apps and settings which would need sorted out.

By the way that Epson LQ680 (which was switched off when I took the screenshot) is also network connected and works just fine.

How do I resolve this?

Additionally I'm left with an "Unknown Device" after the printer installs - it appears to be the part of the driver responsible for printing - as the scanner on the printer actually worked ok.

If I ask Windows to search for an updated driver this happens: 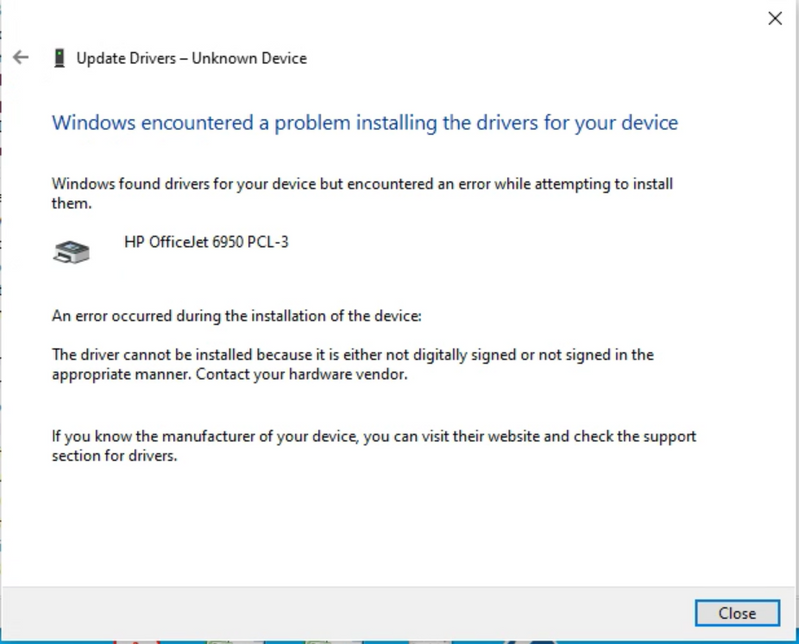 Surely someone has encountered this problem before, what's the solution?

With the printer on and connected to the computer, go to HP Customer Support - Software and Driver Downloads, and then identify your printer. Look for and install any available firmware updates. For more information, go to Updating or Upgrading Printer Firmware.

Use HP Print and Scan Doctor

Download HP Print and Scan Doctor and run the program. It will automatically diagnose and fix any printer connectivity issues.

For more information, go to https://support.hp.com/us-en/topic/printscandoctor

Also, I would suggest you try the Windows built-in drivers. Follow the steps below:

•    When the page prompts for the drivers, select "Windows update". The driver list will be updated.

•    Click HP, Hewlett Packard, or Hewlett-Packard in the Manufacturer pane, and then click the name of your printer in the Printers pane.

Refer to this document HP Printers - Installing and Using the Windows Built-in Print Driver for help.

Thanks very much for your suggestions.

I've used the printers web control panel to check for firmware updates and it says there are none. Is that sufficient, or might the HP website list firmware the printer isn't finding itself?

I've also already tried the HP Print & Scan Doctor, and Windows Update, sadly without any success. I always end up back at the same problem as I've described unfortunately

Let me check and write to you.

8.       Windows should find the printer if the printer is on and configured correctly. You may have to specify more information. If prompted, Select the type of network adapter installed in the printer in the “Device Type” drop-down list. You can also click “Custom” to specify custom settings for the network printer. Select “Next“.

Sorry for the long delay replying.

I've tried that - the printer is located ok that isn't a problem. It's when it then tries to install the driver that I hit the problem - selecting the correct driver causes the error I indicated.

If I continue and select the wrong driver (for example "Generic / Text", the install will finish - obviously the printer won't work with that driver. If I then go back and try to change the driver to the correct one I am again faced with the same error relating to problems with the driver files.

I recommend you delete the driver and root level and retry, follow the steps below:

1) In Windows, search for and open Programs and features

4) In Windows, search for and open Devices and printers

5) In the Devices and Printers windows look for your HP printer. If you see it listed right-click on it and choose ‘Delete’ or ‘Remove Device’

6) Open up the run command with the “Windows key + R” key combo.

7) Type printui.exe /s and click Ok. (Note: there is a space in between “printui.exe”

9) Look for HP Printer driver. If you see it Click on it and click Remove at the bottom

11) Select Apply and Ok on the Print Server Properties windows

Let us try installing the Windows 7 drivers on this computer. Use this link to download and install the new driver. Configure the printer and try printing.

Thank you very much for the further suggestion - Im afraid I'm still left with the same problem as when we started. The uninstall, download, and reinstall all went fine... the printer is identified, the software is downloaded, I'm told that it's all installed and everything is fine.  However when I look at the printer it says "Driver is unavailable" - which is what's been happening since it stopped working.

The screenshot below shows what's going on, I think the "Unknown Device" listed is actually the part which does the printing as the printer appears, and will work, as a scanner despite not being able to print. 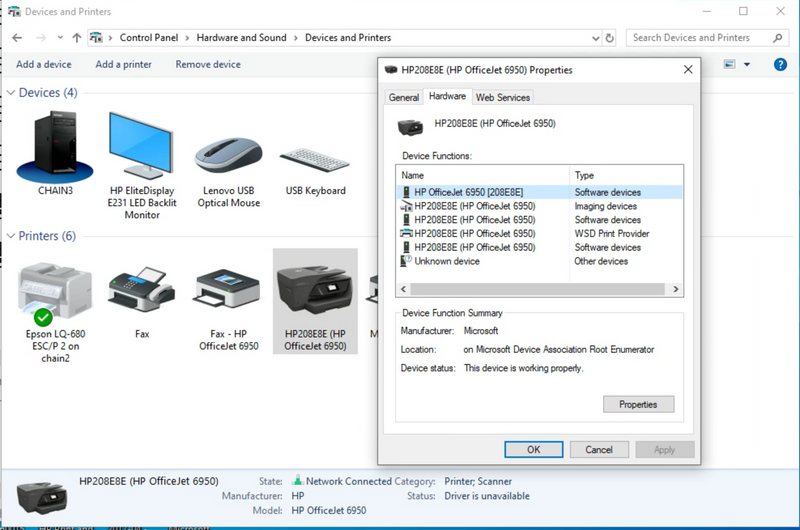 This would further require remote assistance. I would suggest you reach out to the HP Support in your region for further course of action.