I have an error message "0xc19a0003 There is a problem with the printhead" diplayed on my HP officejet pro printer. It's been a little over a year since I've been using this printer and this is the first time I've had any problems with it.

I tried to follow all the troubleshooting steps on the HP support website but the problem is not solved. Any advise would be greatly appreciated. 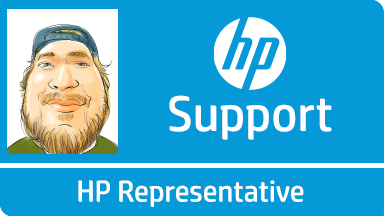 Hello @naimasam,  and welcome to the HP Forums, I hope you enjoy your experience!

I'd recommend starting by removing the ink cartridges, and performing a power reset.  Disconnect the power cord from the printer and the power outlet, then wait 60 seconds. After 60 seconds, plug the printer back in. Ensure you plug the printer directly to a wall outlet. Make sure to bypass any sort of surge protector or power bar.

I would also recommend this document:

Good luck and please let me know the results of your troubleshooting steps. Thank you for posting on the HP Forums!

Please click “Accept as Solution " if you feel my post solved your issue, it will help others find the solution.

Click the “Kudos, Thumbs Up" on the right to say “Thanks" for helping!

Jamieson
I work on behalf of HP

"Remember, I'm pulling for you, we're all in this together!" - Red Green.
0 Kudos

I followed the troubleshooting steps you suggested but the error still shows up after I turn on the printer. I also tried following the steps in the article you suggested but little success. Do you have any other suggestions that could help solve the problem?

Hi Naima, thanks so much for getting back to me!

I appreciate you trying those steps.

Sometimes, a carriage jam error misreads as a 0x error. I'd recommend utilizing the steps found in this document:

Please click “Accept as Solution " if you feel my post solved your issue, it will help others find the solution.

Click the “Kudos, Thumbs Up" on the right to say “Thanks" for helping!

Jamieson
I work on behalf of HP

"Remember, I'm pulling for you, we're all in this together!" - Red Green.
0 Kudos

The printer still doesn't work - I've tried lots of steps but with no success. What do you recommend I do now? Take it to the service center? Thanks.

Thanks for using the forum.

If you are gettng printhead failures on this printer model, thereis nothing more you can do except to contact support.

Depending on your region,  click on the appropriate links.

Please click the “Accept as solution” if this has helped solved your problem and “Kudos Thumbs up”  as an encouragement.

I am an HP Employee
Although I am speaking for myself and not for HP.
Please click “Kudos Thumbs up” as an encouragement and “Accept as solution” if this has helped solved your problem.
0 Kudos
Tags (1)
View All (1)

The problem can be rectified in 9 easy steps:

I kept getting this error and I tried to recycle power a few times with no luck.

So I took the printer apart and found a small piece of paper jamed in the printer head area which seems to be the reason that I was getting this print error. I removed the small paper and it seems to be working fine now.

While this worked, then I had a paper problem. Why isn't there a manual paper feed on this thing?

Three years ago I purchased an HP laptop and an OfficeJet 6830 printer.  Neither the laptop nor the printer worked and both had to be shipped back to HP.  They fixed some issues with the laptop by  replacing the network card and the hard drive and tinkering with other things.  Some issues were NEVER fixed and HP would not take responsibility.  The printer had a printhead issue and also would not connect to the network.  I paid for a new printer and they sent me a refurbished one back.  Apparently the Printhead problem was a known issue.  I have barely used the refurbished printer and the printhead went bad again.  HP hung up on me when I called to find out what they would do about it.  They skirted the issue, they refused to acknowledge that it was a problem they knew about.  They have NEVER offered me any kind of compensation for all the trouble I went to and now I am out about 40 dollars in ink because I have to toss this printer.  I had to spend money I got as a gift to buy another printer.  I can't even use their website to file a report on the issue or even contact them because their website is not functioning due to supposed upgrade issues.  The website is still down today and when I called HP in an attempt to talk to someone about the issues and find out if HP intends to do anything about the problem, the automated system directs me to use the website which is UNUSEABLE!!!

I hope someone reads this.  I hope it deters someone from buying an HP product.  I have worked on computers for years.  HP used to be a good middle of the road option but I tell everyone I know now..."DON'T BUY AN HP PRODUCT!"

Oh, by the way,  several people I know have complained of nothing but problems with their HP garbage...oh, excuse me, I meant to say products and the other word just slipped out.  I take no responsibility for it...just like HP takes no responsibility.  They are costing consumers and they don't care!   So don't bother calling HP, you will get hung on but it really didn't matter, I couldn't understand the very heavily accented person on the other end anyway!