My OfficeJet J6480 keeps reporting a paper jam.  I have troubleshot the problem to be a gear on the right side of the printer.  I couldn't find a parts diagram any where on the Internet so as to be able to know what the part number of the failed part is.  I believe it has something to do with lifting and feeding the paper from the feeder tray, but not sure.

Here is a picture of where the part goes on the printer... 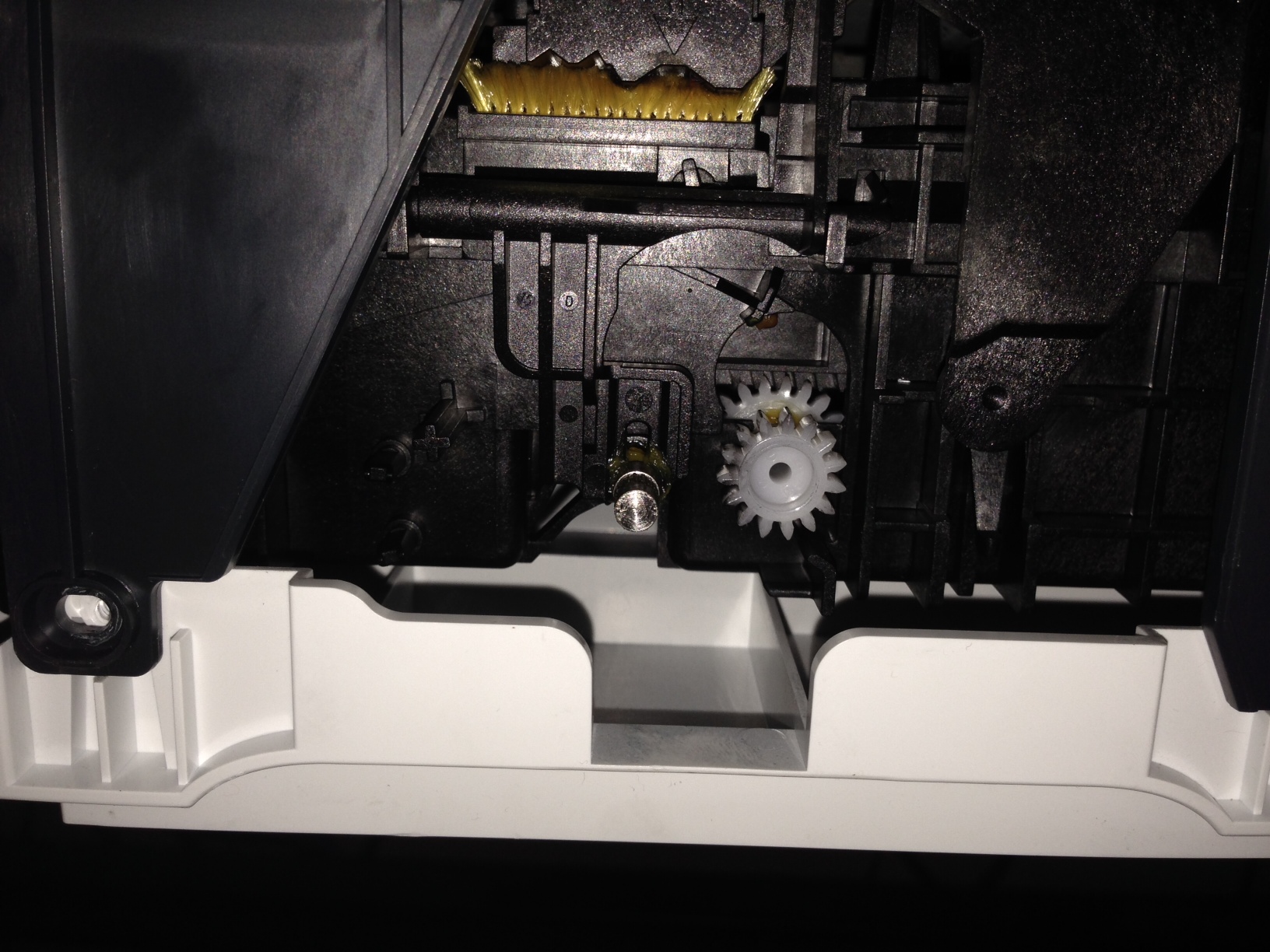 It's the gear that goes on the spindle in the above pic.

Here is a picture and the mechanism that goes on that spindle.  The gear that is broke is inside this mech. 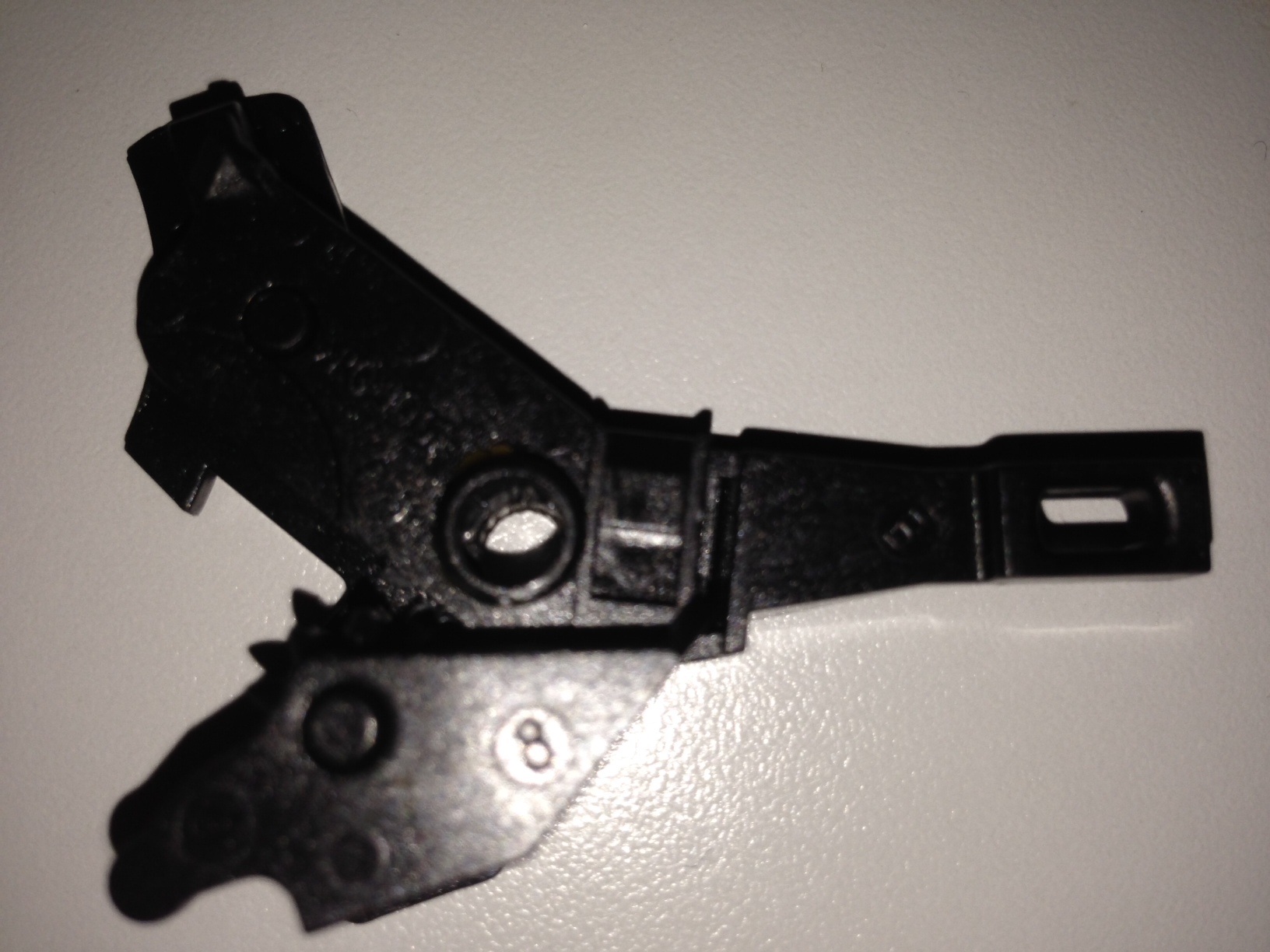 I would like to be able to replace just this part.  The printer works great other than this.

This part is not a customer replaceable part, therefore you will not be able to get it from HP. You could try a mom and pop shop, or maybe get a second hand printer for parts, but my suggestion is to contact HP and see if you could get a newer printer at a discounted cost. HP may be able to offer you a newer printer as a part of their trade in trade up program (varies by country I believe).

Sunshyn2005
I work on behalf of HP

This is sad, I have the same issue and I found another post with the same exact issue..

it would appear, that HP wants you to buy a brand new printer vs. replacing a less than $20 part.

but Im not even sure what the part number is... I can barely see it but I think its PC 10GF

sense the manual dont show this part and there is NO HP support to fix or replace this part, and I dont know the part name or the part number, How can I get it replaced or repaired?

Im NOT even sure if it is even called a "gear" Im just going by what ive found on other posts.

It would seem to me if I have paid what ever I paid for this printer which was up in the hundreds... that HP would at least support their own product and allow me to replace an obviouslly defective part, that more than ONE person is having the same issue.

I took the printer apart visually, meaning... I understand exactly how the paper is fed, how the mechanism works. after learning about how everything works in my printer, I realized that this part had fallen off or broke inside of my printer. When I was looking in the area of the ink, which where I thought my issue was NOT a paper jam. I took off the right side access panel (because I couldnt not take off anything else, I need a special tool, thanks to HP) immediatly I saw this black piece that looks like some type of gear. I had no idea where it goes.

#1 when I put the part back on the printer, it will not stay, it will work itself back off

#2 there are 2 gears on this part but there seems to be a place for a 3rd gear, (but no one shows a good enough image for me to be sure if its 2 gears or 3) from my best guess, it appears to be a gear missing.

#3 how was the customer supposed to know what the part name or number is? and this is NOT an accident that many people are having the SAME EXACT issue.

no one has a solution, pointing me to another website is NOT a solution. so why say that the issue has been resolved when it has NOT? 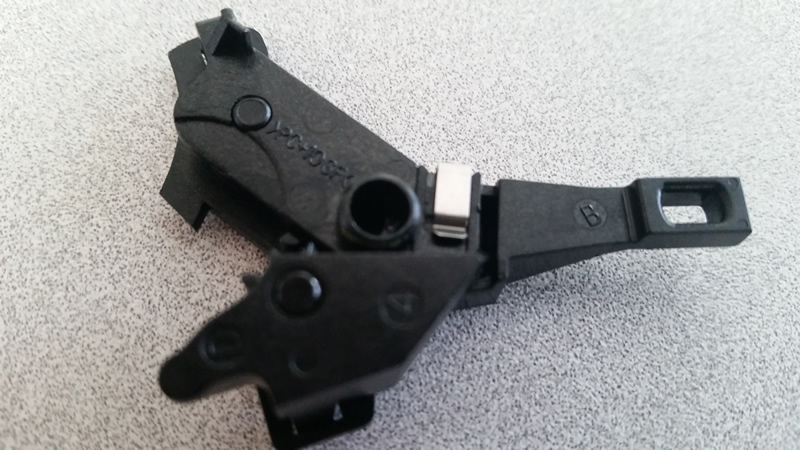 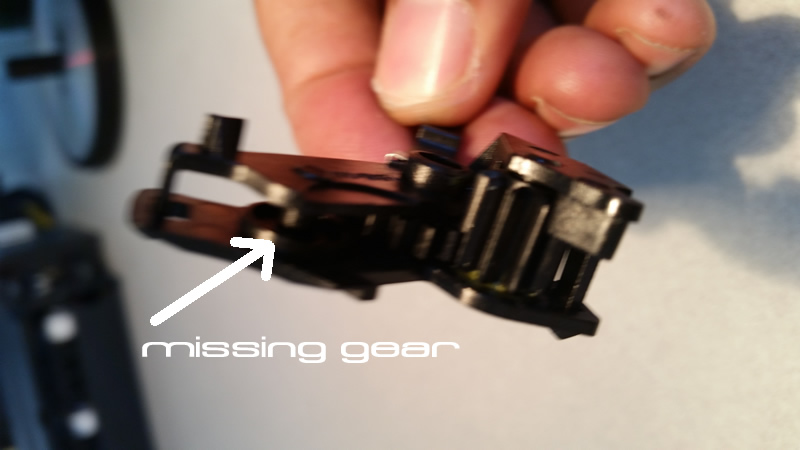 The clutch assembly gearbox has only 2 gears, the small plastic 'shaft' acts only as a spacer.

The 15 tooth gear that was press-fitted on the clutch shaft did not bear up the workload and got broken, so the black clutch gearbox became unattached and fell off. Since the clutch actuates the paper feed drive when the printer head is parked all the way to the right, without this gear the paper feed is impaired thus triggering the paper jam sensors.

You can get a set of 10x replacement 15t gears on Aliexpress for US $5.50 +shipping ("clutch gear carriage lock for HP4580 4660 4500 C3180"), or one complete clutch for US $7.80 +shipping ("New cluth gear for HP 7000"). The advantage of replacing the entire clutch assembly is that the gear comes factory press-fitted, which should fix the problem and extend your printer's life.

Or check a recycling centre for any Officejet printers, the broken gears plague makes them regular visitors. These printers are stuffed with gears, and you might find same size as yours. Old toner cartridges are also full of goodies.

I got 4 identical  gears from an OJ 8500, only they're thicker - I sanded one down in a couple of minutes by sliding it in circular motion onto fine grit wet paper placed on a flat hard surface.

Good luck, hope you'll bring back your printer back to life soon!

Thank you very much for the info. 🙂

HP Recommended
You're welcome! And most importantly, hope it helped you and anybody in need. Thanks for the kudos!
1 Kudo
Highlighted

I found the entire clutch assembly on Ebay. It was $19.00 (Best offer)

Clutch Drive Gear Kit for HP OfficeJet 6000 6500 6500A 7000 7110 Printer Parts. I hope this helps anyone else who may be looking. It just doesn't make sense to throw out an entire printer that has nothing wrong with it, and buy a new on for $200+ when you can replace a $20 part. I have a TON of ink as well, that I would hate to have to replace with a new printer. I am very thankful for forums like this. Without your help and information, I wouldn't have known what it was called and how to look for it. You are awesome STiberiu. 🙂