This topic has been archived. Information and links in this thread may no longer be available or relevant. If you have a question create a new topic by clicking here and select the appropriate board.
Highlighted
tripap
Level 2
16 6 0 2
Message 1 of 4
1,023
Flag Post

Excel 2010 offers icon sets as a conditional formatting option. Cells display the icons properly, but when the worksheet is printed, some of the icons are rendered with what looks like a minitature 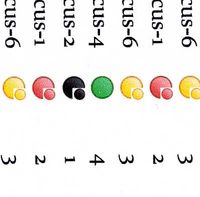 version of the icons overlaying one quarter of the icon. I've tried printing from a .pdf version of the worksheet or directly from the Excel display. Both Print Preview and the PDF versions of the image look fine, but when printed to hard copy on my Photosmart D7360, I get the funny insets, and they are not consistent. Any thoughts on why they are occurring would be greatly appreciated.

I think it is some sort of incompatibility between the printer driver and Excel 2010. I tried it in Windows 7 and a Photosmart C6180. Some of the icons had exactly what your results were, but it was not dependent on the cell contents.

Personally I would see if a different icon had the same issue. Unfortunately I could not find any sort of fix for that issue, even on Microsoft's site.

I was a support engineer for HP.

I expect you are correct in your conclusion that it is some sort of incompatibility between the driver and Excel 2010, but I don't yet consider it to be a solved problem. I'd really like to have some visibility as to when this incompatibility might be addressed with modifications to the driver. As I noted, when I print to a PDF file from Excel, the result looks fine. If I then print the PDF file to my D7360 printer, I see the funny icons. If I print the same file to my HP Laserjet 1536dnf, there is no problem at all. That implies it's not just an Excel/driver problem, but also an Adobe Acrobat/driver problem, and the common denominator is the D7360 printer driver, which I believe is a generic printer driver for HP Photosmart printers. Before Windows 7, there were drivers identified as D7300 family drivers, but with Windows 7, the driver HP says to use is this generic Photosmart driver. Maybe there's something going on there.

I believe you are correct. So I just tried it with a much newer printer on Windows 7 with Excel 2010. Using the same file that printed incorrectly with the older C6180. It printed perfectly on the 6510 printer. So it is a driver issue. Hopefully an updated driver or patch will take care of this in the future.

I was a support engineer for HP.

If the advice resolved the situation, please mark it as a solution. Thank you.
1 Kudo