This topic has been archived. Information and links in this thread may no longer be available or relevant. If you have a question create a new topic by clicking here and select the appropriate board.
Highlighted
LizBirch
Level 2
15 15 0 6
Message 61 of 119
3,304
Flag Post

The only way for me to make copies IS from my computer (laptop). I haven't figured out how to scan. I just take photos with my phone and email the photos. So YES you can make copies from your computer

There are fixes in here so keep reading. I haven't gad a chance to do them yet

This is maddening that we all have the same issue and HP does nothing! This is my last HP product

Every single one that I've replaced with a used or new part has died again the same way. Most likely an over voltage issue with the main board. In my opinion throw the entire printer away and invest in a more reliable brand. The fact that HP (Hunka Piece'a junk ) sells servers, laptops and pc 's only proves that HP wears too many hats and can't concentrate on what they used to make the best of -- printers. I would recommend Brother or Epson.
0 Kudos
Highlighted
sgreene100
New member
1 1 0 0
Message 63 of 119
3,195
Flag Post

I have an HP Officejet Pro 8600 and the touchscreen display panel can't be read.

TO THE CEO OF HP FROM:

A GROWING NUMBER OF VERY DISGRUNTLED

I bought one of the OfficeJet Pro 8600 printers for my business, and what a mistake that was! Yesterday I saw the screen white - no icons. This white screen problem is OBVIOUSLY very common with this unit.

Some people are posting solutions that require the use of the touch screen?

Hey it's not working, that's why they're asking for help!!!

And please do not tell us to switch it on or off as a solution.

If I have to do that more than once or twice it tells me that the printer is a lemon.

Do the recent firmware updates address this problem?  Because if they don't then why tell people to update the firmware? It's not going to work!! By this time HP should really issue an advisory, since their engineers must know by this time what is the problem. Why doesn't HP tell us the truth so we can move on?

What is causing the problem? Let me guess?

If it's out of warranty you can replace the screen yourself fairly easily , BUT if some other component caused the failure then guess what? It won't be long before it happens again!!

For those of a technical bent, used and new parts are available on the internet (google CM 750-60021 for screen and CM750-60001 for main logic formatter board). Original suppliers of these parts are in China (cheap and nasty rubbish) but you might end up paying nearly the price of a new printer. That's why HP just replaces the printer as long as it is under warranty. It's obvious they are between a rock and a hard place.

(1) If you truly love the printer take a chance and spend USD40 on a used screen. If that works use the printer to death until it fails again, dump it and get something else (obviously not HP - out of respect because this is an HP forum I won't mention the better replacement)

(2) To HP - get a more reliable supplier of parts if possible.

Maybe I'll figure out who the CEO is and ship him my worthless HP printer. That way he can dump it.
I have no problem with saying in a HP forum that I will be moving on to Brother.
Their lack of concern for the customers is appalling! And it isn't just a random problem. We are the only ones speaking out.
0 Kudos
Highlighted
LizBirch
Level 2
15 15 0 6
Message 66 of 119
3,058
Flag Post

Oh yea... The CEO is Meg Whitman. Read this lol ... Whitman, who took over as CEO in September 2011, had an initial annual salary of $1. In the year that ended in October 2014, it was raised to $1.5 million as Hewlett-Packard’s turnaround progressed, the company wrote in the filing.
For 2014, the company beat its own targets for revenue and free cash flow, but narrowly missed its earnings goal, according to the filing. That led to executives such as Whitman and Weisler getting greater payouts than in previous years. Whitman got $4.31 million in incentive-based compensation in 2014, up 8.6 percent from $3.97 million the previous year. Weisler’s incentive-based pay more than doubled to $1.72 million.
0 Kudos
Highlighted
skipper_bob
Level 2
21 21 0 10
Message 67 of 119
3,052
Flag Post

For those who want to know about the touch screen replacement. But you have to be very careful and have good eyesight, so you don't break anything. And make sure the printer is off before you do this.

When you lift the top printer cover to access the scanbed, on the right front you will see three small round covers just above the screen. These covers can be pried out with a tiny screwdriver revealing three screws.

Once you undo these screws you can shift the touch screen assembly.

You will then see TWO connecting cables, one large which is the data cable and one small which is the voltage cable.

These cables are held in place by a plastic clip which can be squeezed and lifted off, revealing the cable connections.

Now sometimes the voltage cable can become dirty or loose - a regular problem with any hinge mounted screen. So you can try pulling out the cable and cleaning the end and then re-inserting it. If you are LUCKY it might start working again. If not well......you know.....what have you got to lose?

Actually I found the bug an got it fixed by changing a SMD-condenser on the display backplane.

There ist a row of condensers, and one of them might be damaged, when the bug ist appearing. 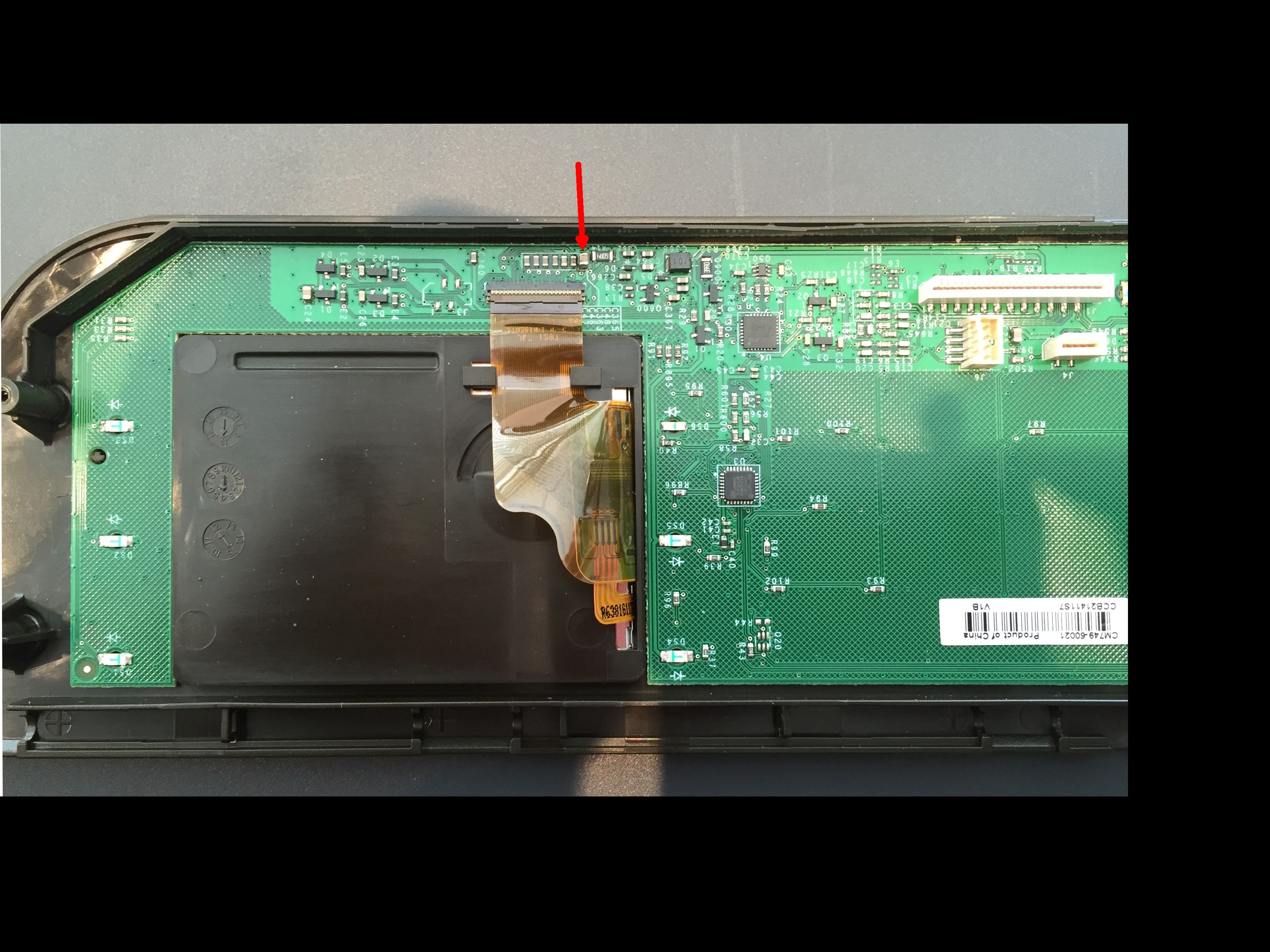 And where do you get the part?