First, press the ePrint button in the top left hand corner of the screen on your printer to access the Web Services menu.

Once there, press the “Settings” button.

If ePrint is turned on, turn it off and then back on. Press the return button and then press “Print Report”.

If ePrint is turned off, turn it on. Press the return button and then press “Print Report”.

These steps might sound strange since the issue is with eFax, but eFax works on the printer through the ePrint service.

If this fix does not work for any of the issues listed above, the issue is probably related to something else. Let me know in this thread what issue you are having and I'll do everything I can to get everything working for you.

I REALLY appreciate your help.  Your fix worked and relieved a lot of frustration.  I have HP everything (Printer, lap-top, desk tops)  and was upset there wasn't an obvious "contact" option in the support web-site.  I knew if I was allowed to describe the problem, a bright person like you would respond.

HP Recommended
Many thanks for above, it worked for me on my 7510.
Best regards
0 Kudos

HP Recommended
please can you help i purchased a hp photosmart 7510 however i cannot get efax to work i have registered on the printer panel, have eprint setup and working fine but efax will not send or receive, i am entitled to 20 free faxes with this printer. i have contacted various departments and no one can help me. i have tried setting up a static ip and changed dns settings but still no luck. Ii have changed the email address of printer in the past but there was no difference as such i have just restored everything to factory settings.. please help i am at my wits end have had a replacement printer sent but no difference. I have tried doing ur quick fix but again no difference. I am on BT as my IP, and have a home hub 3 as my router. when I send a fax it says it's received at the efax centre, but when I look in status it just says busy/retrying.. anyone that try's to fax to me gets a failure message.
1 Kudo

You could get in touch with eFax and have your account deleted and try to create a new one.

You could log out of your eFax account and create a new one with an alternate email address.

HP Recommended
have deleted efax account and setup multiple new ones with different e-mails but still the same, i agree that possibly something with efax and the free hp account, however i have phoned efax and e-mail them and contacted through their site but keep getting same response that i have a hp efax account and that they will not provide customer service that the fault lies with hp
1 Kudo

Are you able to sign into eFax on your printer?

Here's my issue (It's one of the ones suggested by the original "Solved" response:

I CAN, using the exact same fax number and the exact same PIN, log on from any computer, my iPhone, my iPod, etc. etc, time after time all day long without fail.

Let me be completely clear... this used to work just fine.  Used it a lot.  None of my eFax information has changed at all.  Suddenly it stopped working.  It was around the time of the last system update applied at the control panel.  I can't fax any more, because it can't log into the eFax system.    I have tried several times now to turn off/on ePrint.  I have even tried twice to remove web services and reinstall them (again, from the touch screen).  When I try to login to the eFax service from the touchscreen, I get the message: 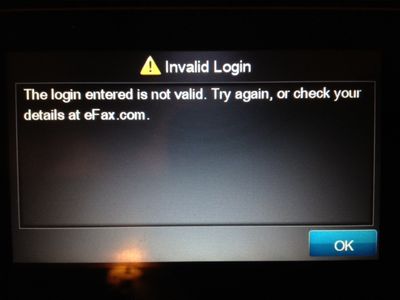 Sporadically, when I have attempted, I will get prompted that ePrint is not enabled, and would I like to enable it.  However, if I go look at the settings, either through the settings on the touch screen or by entering the printer's IP on the address bar in my browser, the setting shows as already "On".  If I agree to the prompt to enable ePrint, then go back to the settings, it is now off.  I turn it back on and try again, and sometimes it repeats, sometimes it does not.  I would rate the chances of being erroneously instructed to enable ePrint at about 20% of the time.  It is really quite random and sometimes it will happen 2-3 times in a row.

Also seemingly randomly, every computer configured to use the printer with "Scan to Computer" installed on my wireless network will receive a system tray alert indicating that Scan to computer is currently unavailable.

It really is quite frustrating.  Everything worked perfectly during the first 2-3 months after purchase (if you know of a failing cluster of printers sold at Fry's in North Austin, TX, I'm apparently one of them; NOTE I am not saying there is one, just don't know if you track such things).  I replaced a C309 printer  (I think it was a Photosmart 5510  or 5150 or something like that) that had served faithfully until the wireless card went out years after purchase.  About 6-7 months after the wireless died, the printer lost its mind and would start repeatedly chiming after performing a job (but I'm not here to talk about my previous faithful printer).

If it helps, here is a bit of configuration information for you: