Re: Printer not detect after windows 10 creator update

Same here. HP Photosmart 7350. Microsoft keeps removing compatible drivers (which already have to be installed manually), now after installing the Windows Creator's update it doesn't show up anymore at all. Not funny!

This is a great location to get assistance! I read your post and see that you are having issues with the printer driver after installing windows 10 update. I would like to help you resolve this issue.

The issue might have been caused by recent updates on your computer. I would suggest you a workaround by changing the compatibility on the drivers. Follow the steps below (Check the fig below for ref): 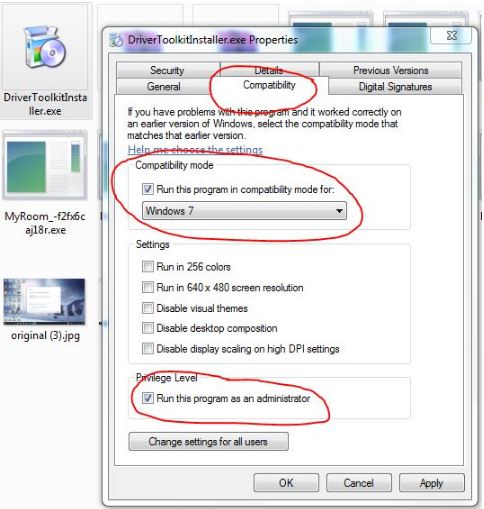 thank you for trying to help me.

The instructions didn't work for me, but you probably don't mean to suggest to run a program on Windows 10 in compatibility mode for Windows 10 (that's not possible, the highest version I was able to pick was Windows 8).

I was able to install the printer on two other Windows machines (also with the Windows 10 Creators Update), because the printer simply appeared in the Device Manager under Other Devices. I then right clicked it, clicked on "Update Driver", "Browse my computer for driver software", "Let me pick from a list of available drivers on my computer", selected "Printers" and clicked "Next", chose "HP" under Manufacturer and "HP Photosmart 7520 series Class Driver", clicked "Next", then "Yes" for the "Update Driver Warning", waited a bit, and it worked.

I'm not sure what happened on the machine that I tried it initially in. After uninstalling the HP software you mentioned and restarting again, the printer now popped up under "Other Device". I had unplugged my new USB WiFi adapter this time - maybe that was the issue. However, after doing this, the printer also showed up again with the USB WiFi adapter plugged in.

Anyways, it's working now, with the Photosmart 7520 driver, as before the Windows update.

Thank you for your help!

Good to know that issue is resolved.

Feel free to contact us in feature if you need assistance.