EDIT: After testing today I think the problem might be with the audio interface; I'm using another one and have yet to have any crashes. I'll continue to test and update, but not sure if it's possible to delete a thread on here...

I am an online piano teacher. In my classes, I run Zoom or Skype on this laptop. I run into the same problem with either service. Over the course of thirteen different classes so far, I've had the laptop suddenly reset with no warning four separate times.

While on a call with this laptop, I have an external audio interface (a Focusrite Scarlet Solo 3rd Gen) plugged in, as well as a midi keyboard controller (Roland GO Piano), and an ethernet cable connected via the official HP Ethernet to USB C adaptor.  I am using the laptop's built in camera, while screen sharing to display sheet music to my students as well as a virtual light up keyboard program which takes the incoming midi data and shows what notes I'm currently playing. On the call is myself, my student, and a second laptop which displays an overhead camera to show what my hands are doing.

I thought at first the laptop might be overheating, despite positioning it in a place where the fan vents are unobstructed - but I've been keeping an eye on the temperatures with Core Temp 1.16. While the temperatures sometimes get quite high (a max of 92 C was once reached but that's below the limit of 105 C listed on AMD's website for this processor, and also is usually no more than 80 C, usually fluctuating between 50-70 C. I did see at one point a maximum of 18 W of power but again, that was an extreme and the laptop didn't reset at that point. When it does reset there doesn't seem to be anything happening out of the ordinary related to the power and temperature.  These resets have happened while running on battery power, and while running plugged in via the official AC adapter. They have happened with the power mode (via the slider under the battery icon in the taskbar) set to favor high performance as well as set to favor battery life.

I disabled the "Automatically Restart" option under the advanced system settings in Windows 10, but on my first random reset of the day today I didn't get a blue screen with an included error message despite making that change.

I've checked the  Crash Logs via the Event Viewer...I do get error messages saved here saying that the previous resets were unexpected, etc. but there doesn't seem to be any related to the crashes themselves. I did export all of the logs from today (since turning it on up through coming back online after today's random reset) and can upload that here; I don't see an option to upload files to this post but if there's a way to do that I have that ready.

I have included below a screenshot from the Reliability Monitor program in case that's helpful.

Please advise - I have an eight year old laptop which has previously been able to do everything I've described above without any crashes whose four cores seem to run much hotter than this Envy's, so I'm not sure what could be going wrong. I was hoping this laptop could replace that one for my work but so far it isn't dependable enough to do so. 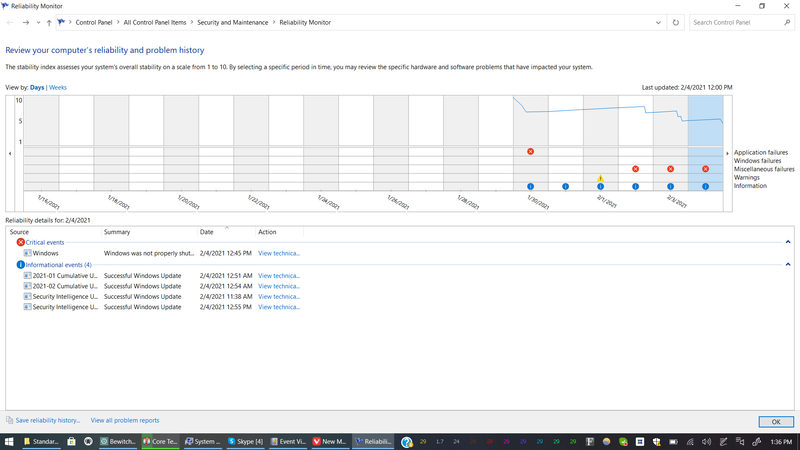