This topic has been archived. Information and links in this thread may no longer be available or relevant. If you have a question create a new topic by clicking here and select the appropriate board.
PaulineTan
Level 1
16 7 0 0
Message 1 of 6
678
Flag Post

HP Recommended
Product: HP Envy x360
Operating System: Microsoft Windows 10 (64-bit)
Hello I would like to ask:
I updated my BIOS last night to the latest version. I am on Windows 10, HP Envy x360. I updated it sucessfully and I am not facing any issues as of now. I wasn't facing one before I updated. Everything was going smoothly but I saw in the HP Support Assistant that I have numerous things to update so I clicked it all & updated. When the BIOS finished installing the computer restarted and I continued updating the others (which included the BIOS internal) but in the middle of the update, I stopped it. And it said it's not applicable anymore. I clicked to update again & the other 3 (there was 4 of them including the BIOS internal) updated succesfully. I even contacted support at that same night to let them do the manual update to give me a peace of mind. The technician said I updated it correctly. But what I read on everyp site on the internet that not to update the BIOS. So I am worrying & scared right now because my laptop might encounter problems that weren't there before the update. I am regretting my decision, I am not a techy person and I don't understand the computer world very well yet I decided to update without knowing first what it was. I am very scared of what might happen because of my carelessness.

My questions are:
1. Will updating the latest version of the BIOS without any problems in the hardware or anything (it was running smoothly, I just recently purchased it) harm the laptop or give problems to the laptop?
2. What can I do to avoid issues after the BIOS update?
3. Any tips?
4. Is keeping everything up to date bad for the laptop? OR: was updating bad for my laptop?
5. What are the few indications that my laptop is experiencing issues due to the update?

If it ain't broke don't fix it. If it is not giving you problems all is good. If the BIOS update was going to cause a problem it would be a big problem and you would know it. Relax. Enjoy.

HP Recommended
Thank you for replying. But I already updated it last night (not knowing what BIOS was.. And my computer was running smoothly, no issues whatsoever) will this harm or affect the laptop? I am currently facing some malfunction on Google Chrome, Spotify and the logging in. The tech support on HP Assistant said that he can run some troubleshoot. I don't know what good that will do. I am also thinking that I will ask from the tech support on HP to downgrade or restore my previous BIOS but again I don't know if that would be a smart & better move. My BIOS now is insyde f.16, is it the same with you? Thank you again.
Was this reply helpful? Yes No
Huffer
Level 18
45,554 44,603 7,327 13,066
Message 4 of 6
Flag Post

No it will not cause you any harm. Not to bore, but BIOS is Basic Input Output System. It mostly functions before Windows loads onto the computer at the very start. So you rarely actually interface with the BIOS. BIOS updates allow the computer to function better with the hardware it has, maybe how fast the fan runs or something like that. You do not need to fear the BIOS although I do generally say there is not a need to update the BIOS unless you are having a specific problem that specific BIOS update was designed to fix. I would not mess with trying to downgrade. Every time you "flash" (i.e. change or rewrite) the BIOS there is a very small risk it will go wrong and leave the computer inoperable. I understand your concern but in this case it is misplaced. All is good.

Hello, thank you again so much for the informative response. I continued using my laptop as I normally would before the update and now it's been a week. I didn't notice anything strange that I would say I should be worried except for the occasional lags. I also shut it down for 2 days because I didn't saw the need to use it at that time. I thought that it might be a good thing to do so the laptop can rest. But recently, when I opened it, continued with my business... I was watching a video on Facebook when a blue error message appeared (not the exact photo, I just grabbed it from Google) : 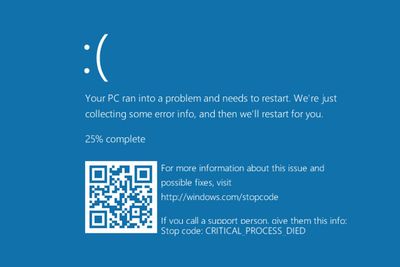 Most of what I read online is, it is called the Blue Screen Of Death.

Can you tell me what this is?

Why did it possibly showed up on my computer?

Does this have something to do with my recent update of the BIOS?

What does it mean when you get this error message?

It showed on my screen & it stayed there until the percentage reached 100%. There was also this annoying sound. Probably because I was in the middle of watching a video? I really have no idea and again need your expertise.

After that it restarted and it took longer than the usual. The black screen showing HP was processing slow and long & the logging in was also slow.

Thank you again so much!

Unlikely but not impossible the BIOS update caused it. As the message says, a critical process died. Here are some tutorials about how to find out why:

This topic has been archived. Information and links in this thread may no longer be available or relevant. If you have a question create a new topic by clicking here and select the appropriate board.