It has been a while since anyone has replied. Simply ask a new question if you would like to start the discussion again.
Check some of the most frequent questions about Instant Ink: HP INSTANT INK, HP+ PLANS: INK AND TONER.

Hello
Has now updated to the latest version of Mac OS Catalina. What I have been able to test, the scan via HP Smart seems to work well, not found anything wrong yet.
However, scanning via Easy Scan does not seem to work at all, see example
on error message: 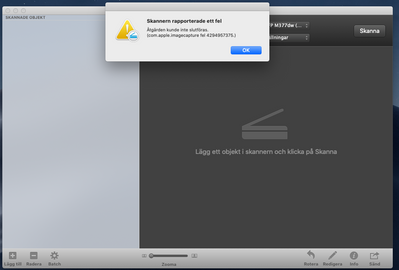 So, in summary, it looks good but except for Easy Scan

Have tested more and done several reboots and reinstallations and now Easy scan works on my Color Laser Jet Pro Mfp M377dw in about 30% of the attempts, when it does not work I get the same error message as I previously show in the screenshot above

Have tested even more and done several reboots and reinstallations incl MacOS and still Easy scan works on my Color Laser Jet Pro Mfp M377dw in about 30% of the attempts, when it does not work I get the same error message as I previously show in the screenshot above

Talked with Apple Support about this matter

hope for a soloution

I also confirm that macOS 10.15.3 solves the problem encountered with HP Easy Scan at the beginning of macOS 10.15 Catalina. The macOS version 10.15.3 is also available in France since yesterday the January 28, 2020.

Please update the MacOS as follows:

I tried with my HP ENVY Photo 7830 Printer (HP ENVY Photo 7800 series) and the scanning functionality from the printer's control panel and from the HP Easy Scan application works correctly.


I'm not an HP employee. Did this message answer your question? Include it below as an Accept As Solution! Did you find this message useful?  Click on the thumbs up set to give a Compliment! Follow us on Facebook Assistance customers HP.
Tags (2)
View All (2)
Was this reply helpful? Yes No

Thanks very much IronBadger for following up on this issue.

I noticed that some of the other subscribers to this thread have applied the MacOS 10.15.3 update, and the HP Easy Scan software now works.

Unfortunately, I have NOT had the same success. HP Easy scan does appear to have been updated, but it still IS NOT working on my Mac. A quick review of my circumstance:

*HP Easy Scan - symptoms HAVE changed, now instead of hanging on "scanning", a small dialogue window pops up with an error code (see image below)

Is it possible that I'm still doing something wrong? It would seem that Hewlett Packard is no longer able to offer support for the scanner on an older model MFP printer, or else there is something fundamentally wrong with my system setup. Any feedback is appreciated, or confirmation from other users that they're still getting the same HP Easy Scan error code that I am.

Thanks again to the developers who have continued to address this matter.

The error you attached to the post is not showing for some reason.  Can you please follow up with the error you are getting?

The only issue I ran into so far is that sometimes if the printer is in sleep mode I will get an error but once I wake up the printer everything works as expected.

While I may work for HP Inc, the views and opinions expressed here are my own.
Was this reply helpful? Yes No

Sorry the image didn't post properly. The pop-up window that appears in HP Easy Scan when I tap the "Scan" button looks like this:

The operation couldn't be completed.

That is the same error I get when the printer is in sleep mode and I attempt to scan.  So, I am pretty sure its a communication error.  I am currently digging into it.  But in my case every time I make sure the front control panel is active scanning works just fine.

Can you try turning the printer off and then on again to see if you can then scan?  Is the 1212 connected over the network or USB?  I will need to try and locate that specific device to see if I can test as well.

Also, make sure you have downloaded the HP Software that supports that device.  You can get that here.

The actual scan driver does not install with Easy Scan.  You need the full HP Software installed.  That would also explain that error and why it was not working with Image Capture either.

While I may work for HP Inc, the views and opinions expressed here are my own.
Was this reply helpful? Yes No

The 1212 is connected to an ethernet hub, which is connected to my cable modem. It prints from different Mac & PC computers around the house using drivers automatically detected and installed by both operating systems. I have tried "waking" the 1212 before opening Easy Scan. In particular, I have printed something from another application moments earlier. I have also tried restarting the Mac, then restarting the 1212 (also in opposite order). Maybe Easy Scan isn't fully communicating with the 1212 because it's connected to a hub (The 1212 does not have USB or WiFi connectivity). I will futz with it a bit more right this moment, just to be sure my results are consistent. Thx

This solved nothing for me.  updated to 10.15.3 and my Samsung ProXpress M4530ND still prints lines of jibberish.  Monopoly houses and other symbols.  Not one peep from HP support.  I was speaking to support, but my warranty expired a few weeks ago.  I'm very dissatisfied with my experience w/ HP.  I've seen techs private message others on here which seems unfair.  While I was speaking with support I received two assurances that the drivers would be available within "2 weeks or so" once in November and once in December.  What is going on at HP?

As far as I'm concerned, I've decided to not spend more time on this and to be the beta tester for either Apple or HP, I've switched to VueScan for a number of days and this works perfectly.

Thank you, Mans, for letting us know. And thank you to Apple for fixing it. 😉

Be alert for scammers posting fake support phone numbers and/or email addresses on the community. If you think you have received a fake HP Support message, please report it to us by clicking on "Flag Post".