When I switch on  my workstation Z600 the blue led is not glowing nor the red when there were errors. But the green HDD Led glows. What could be the problem?  As there are no spares available anywhere can I try by using a jumper on the two pins of the motherboard which are just next to the Power Led cable i.e., behind the HDD Led jumper?

Use google to look up "Z600 spare parts" and go to the HP link near or at the top, and there is the whole list from the past.  These lists generally don't include the version 2 details, but most of the parts are identical.  The part numbers provided in these documents are the SP P/N (the "spares part number") rather than the AS P/N (the "assembly part number") that is imprinted in the plastic or on an attached label on the item.  You use the SP P/N to look up things in the HP system for buying parts.  You use both in eBay, plus the description HP provides.  Virtually every HP part has both types of numbers, so that can be handy in searching if you know both.

For you there are two cable assemblies listed that might catch your eye..... the Front I/O panel connections is not what you want (that is the part that has the front USB, mic/headphone, firewire ports).  You want the "Front user interface (UI) cable with speaker".... this has the power switch/leds unit, the ambient air sensor/speaker and is SP P/N 536305-001.  If you use that number on eBay currently you'll find no matches, but if you use that in google you'll find many, plus some added names for the combined assembly to search eBay with, plus you'll see the HP partsurfer picture: 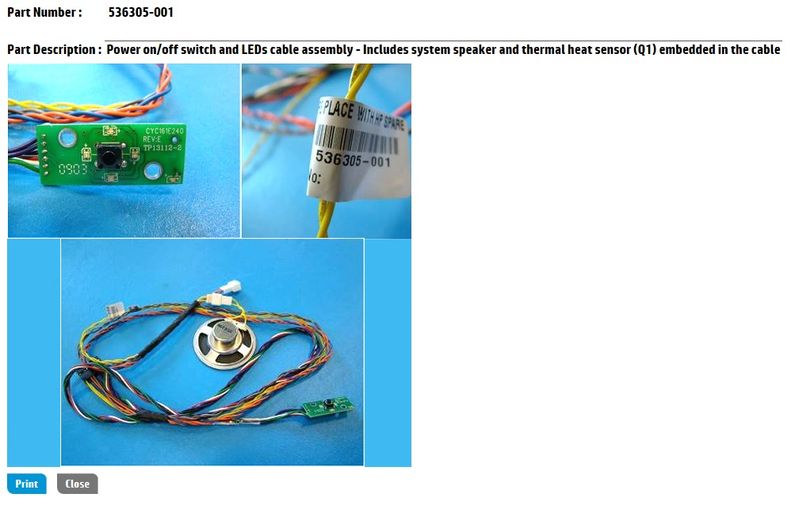 Then I'd go back to eBay and look up "HP Z600 power on/off switch" or some such variant, and you can do the same with google.  Eventually you'll find an ad that has the AS P/N because that is on the item that the seller has in hand.  For this part it is 468625-001.  It turns out HP had a bunch of trouble with the blue LEDs in these, so if you go look for 468625-002 then you're more likely to get a good one.  eBay has a good seller with those that specify that the LEDs work, and has a bunch available for about $40.00 USD.  Another seller has a bunch for about $19.00, but does not address the blue LED issue.  Those are probably fine too, but you might be wise to go with the guy who says his work because this is a bit of a fiddly project.  The Z800 unit will work fine in a Z600... might be a bit longer.

The right side cover needs to come off for this fix... HP has a video on how to do that, but it is not hard if you're handy even without the video.  Start up at the top front handle cross bolt.  Mark the course of the cables with a Sharpie marker on the inside exposed metal and you'll probably want some small zip ties or high quality tape hold things in place as you proceed.  I use high quality metallic dryer vent tape cut to strip size needed for these projects.... never duct tape.  The high quality 3M electrical tape also works well.

So, how did I know this?  I did the project here about 1.5 years ago, and the nice blue light has been happy ever since.

Two added forum posts are HERE and  HERE, and the link to a helpful HP video is  HERE.

Plus four HowTo documents from HP for the Z800 (the Z600 procedures are virtually identical):

Thanks for the reply. At least I could get a seller on amazon.ca. The only thing is it is very costly. It's nearly one third the cost at which I purchased my workstation. But thanks again I could find a seller. It is after searching for 'HP CA Front UI w/Speaker'.

There is another solution to this problem.  I purchased an APC UPS BR1500IN.  I connected my workstation to ups via a controlled switch.  Turn on is not a problem.  When I turn off on the LCD screem of the UPS there is mode which displays % power consumption.  So when the % power consumption falls to zero workstation is turned off and control switch can be turned down. But this holds good as long as the ups is in order.