It ran great for the first few weeks running all games at max settings with great fps (i use a 144hz monitor if that helps). However for the past week or so games like Nier Automota, Final Fantasy 15, Doom (2016) have been crashing. At first it would freeze the game leaving only the sounds of what was happening. I could hear the moving of my character and their attacks, everything was still happening but I just could'nt see it. I thought it may be my monitor but it's brand new and it only happens with these games. It them escelated to the whole games colors freaking out and white blocks fill the screen. Here its my discord overlay but its happened in game with character models apearing in far away places, inverted, and frozen. Note that when the white dots appear i cannot do anything, no CtlAltDel or Windows button works. I can only restart the PC but when my game just freezes I can still eventually exit and be fine. 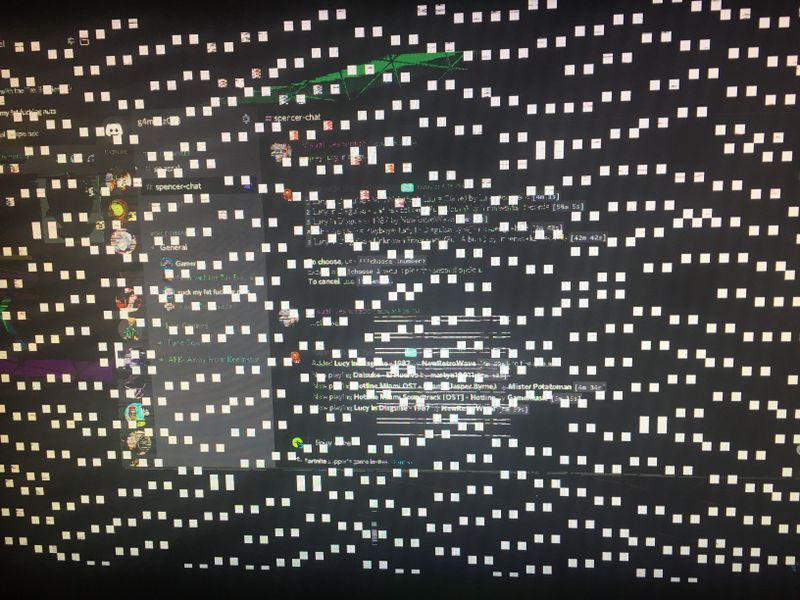 At the moment I think the problem is the graphics card. It gets very hot at arounf 80C which seems to be common but I honestly don't know. But the other problem may be the power supply. I'm not sure the power supply provided has enough power to run this beefy graphics card, CPU, and everything else. My assumption is that the GPU is taking up too much energy and eventually the powersupply can't give any more leading to some type of glitch happening to the GPU  messing up my games.

I think I may check in with the Best Buy I bought it from seeing as I bought a warranty but it it's something that I can fix myself then that would be idle.

Have you updated to the latest Nvidia drivers?

I would start by doing some stress tests. Also download and run HWInfo (Link) while you are stressing the system to check temps.

Furmark (Link) can stress test the CPU and the GPU. Prime95 (Link) will stess the CPU and RAM.

Get back to the forum with results and average/maximum temps.

The PSU could be the problem. Anything is possible.

You really want the CPU and GPU running at average temps below 80 degrees C when running the above tests. Once you get into the 80+ degree C area the system will begin to hang and slow down.

Normally I build my PC itself. Unfortunately I made an exception with the omen this time ..With ceiling fans, I also get up to 85 temp. in Ultra settings.The gpu only has one fan and there is no front fan.500 watt power supply is indeed a bad joke.

I think there's only the move to another tower.Never again Hp!

Thank you for the feedback. I tried the Furmark testbench twice and from 83-85 degrees the computer does the same graphical glitch as earlier as seen here. 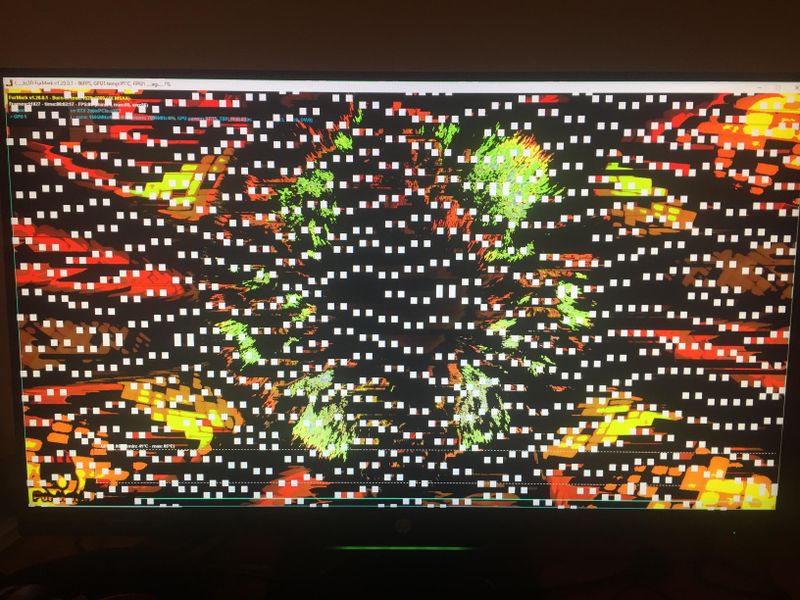 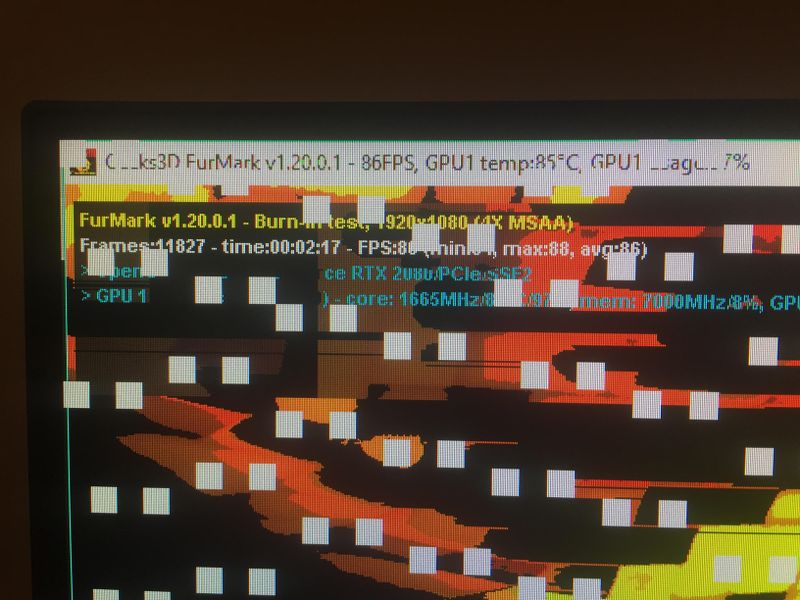 I even tested the CPU to 100% and waited, nothing happened. This basically confirms its either the GPU or PSU I'm really just looking for a possible solution. I have all the latest drivers, checked all the cables, checked the fans, etc. I'm just hoping it's not just my PC, I was just looking for any other way I could fix it quick and easy. Until then thanks for responding, lets hope opening the glass doesn't void my warranty.

Did you install the latest Nvidia drivers?

The issue could be GPU cooling or you may need additional chassis' fans to move heat out of the case. HP modifies some components to work together. Retail 2080 graphics cards call for a minimum 650 watt PSU but HP tweaks the graphics card so it works with a 500 watt PSU.

The Best Buy link seems to be broken. I could not look at your PC.

You may want to consider adding chassis' fans, if possible. You would need a open chassis fan header on the MB. I am pretty sure your PC has additional top chassis fan options; not sure about fan headers on the MB.

I think it's the same as mine. https://store.hp.com/GermanyStore/Merch/Product.aspx?id=4ZJ31EA&opt=ABD&sel=DEF

Fan above Pure Wings 3 causes unfortunately nothing. At least with me.

Thanks for the link.

Well, I guess a top fan may not help.

The only other option is to do a GPU liquid cooling system to get the temps down.

Hello, I have the same problem. Did you find any solution or?? I play PUBG and it was great for the first two weeks, but then it started crashing. And yes I have installed all the newest drivers. My first thoughts were system temperature and power supply... But it is hard to believe that HP would do such mistakes. If you found a solution please inform us??  I have tried to talk to the HP-robot customer service but that is not so easy.

Same issue here. Sent machine in for repairs. Seems it will take ONE MONTH to get back due to lack of new graphics cards.  Their version of the graphics card is failing. Eventhough it uses Nvidia chipsets, it's an HP graphics card.  Hoping to get it back soon.

But do agree on other comments made here. PSU is way under powered for this graphics card and not enough cooling.

I read another thread on this forum that pointed to the poor default fan speed curve for the overheating.

I downloaded Asus' GPU Tweak II and was able to create a custom curve that puts the fan up near 80% max speed when the GPU gets over 70 degrees C. Whether this is sustainable for the hardware or whether I'll get tired of the fan noise remains to be seen but the card holds steady in the low 70s when gaming in 4k.