It has been over seven months since my original post on this issue. Several Windows 10 updates later, both the HP Support Assistance app on my Spectre and HP Customer Support - Software and Driver Downloads webpage keep recommending audio driver update to the very same culprit version 6.0.1.8437, originally released in May 2018.

Recently, several people reported they couldn't hear my voice clearly over VoIP calls - on Skype and MS Teams. On the other side, either (1) my voice was barely audible (though I was speaking normally, not whispering, and from a usual distance from the laptop's microphone array), or (2) they heard a lot of background noise, as if I was in a very windy envoronment or "standing under a waterfall" (though I was sitting at my desk in the office).

I did some testing (with a friendly a patient colleague), and in all instances rebooting my Spectre temporarily resolved the isssue - i.e. they could hear me loud and clear over VoIP calls. I also tested the laptop's microphone with the simple MS Voice Recorder app. I was able to reproduce the issue - i.e. playing back the recording I often heard my voice in low 'volume', or there was a lot of "waterfall-like" background noise.

Further investigation allowed me to zero in on a potential issue with the Bang & Olufsen Audio Control app. On the Input tab, I noticed that altough the HP Noise Cancellation was toggled on, and Multiple Voices option was selected, both the toggle setting and the two radio buttons were grey-ish, rather than white. And, neither the toggle nor the radio buttons reacted to mouse clicks - e.g. I wasn't able to change the setting. After rebooting the laptop, when the microphone seemed to work fine, I checked again and was able to change these settings (the screenshot below is of properly working app). 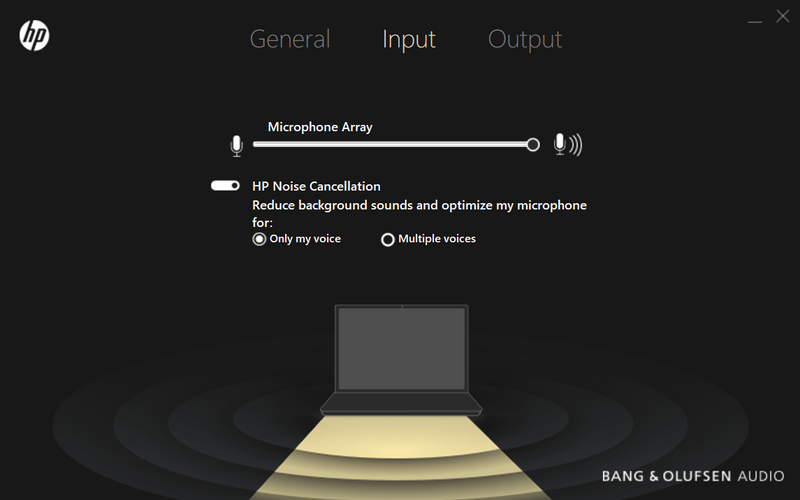 Interestingly (or, not!), the Bang & Olufsen Audio Control app seems to be an integral part of the Realtec High Definition Audio driver's software package designed for HP laptops. I was not able to find a stand-alone installation file for the Bang & Olufsen Audio Control app. And, bacause I am still reluctant to update the audio driver to the notorious version 6.0.1.8437 (as recommended by HP...), I am potentially stuck with another version (6.0.1.8351) of the misbehaving software.

I had the same issue with my HP ENVY x360 15. I thought I found a work around by rolling back to older Realtek drivers but the issue kept coming back. Then I discovered this culprit is the Skype desktop application. I kept having issues with Skype and after starting up and using Skype the issue came back, after exiting Skype and restarting the PC the CPU usage was normal agian. Then I used Skype web/browser version and this did not result in the issue coming bak so that seems a good work around. The issue of course has to be resolved between HP/Realtek/Microsoft obviously..

I have the same problem after updating using HPs auto update drivers.... It is insane these drivers dont pass better QA and testing before HP blindly update million of machines.

This fix did not work for me. I recently updated all drivers via HP's  Support Assistant. And now it is noisy and have this 25-50% usage of CPU from Windows Audio Device Graph Isolation.  I have a Spectre X360 13.3 inch.

I deleted skype a while back and had the same issue so im thinking its not skype. That process was using 40% of my CPU so I ended the task and updated realtek drivers from HP, so far its working normally. lets hope it stays that way - but this started after skype as I never use it.

Could you list the version numbers of the "...realtek drivers from HP..." that are now installed?

Version 6.0.1.8652 in one of the settings I also disabled the ability for other apps to take control. Running through some options I found a place to disable enhancements also. I think this may work 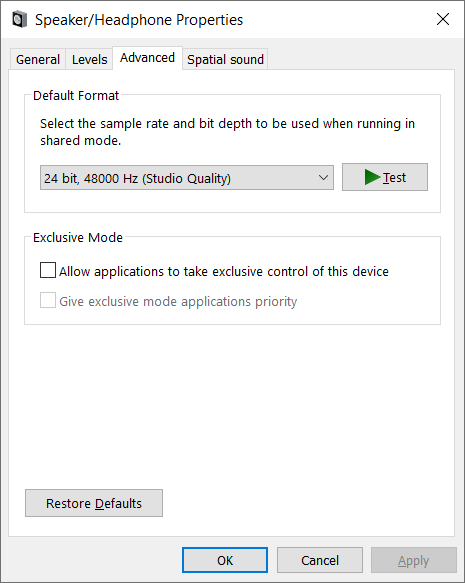 this is the window i used.

ok, sorry. nothing seems to help, but i did trace the process to audiodg.exe in the system 32 file. not sure if i should delete it.