Okay, I will be the first to admit that I know next to nothing about computers so go easy on me if you offer advice or helpful tips! 🙂 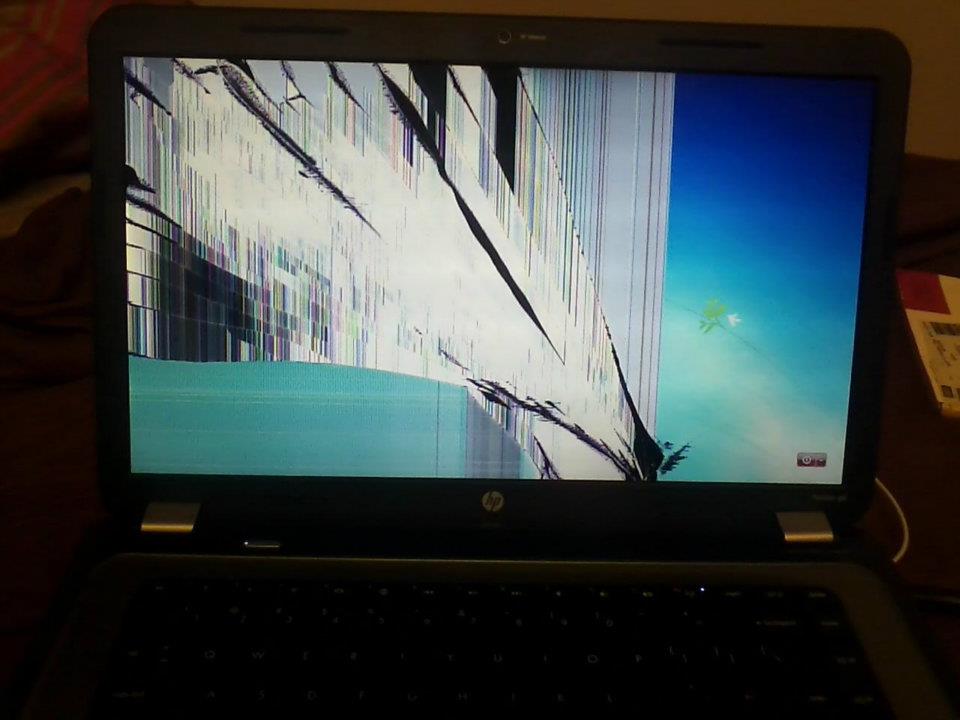 I recognized that this was completely my fault and called HP to get it sent in for repair. After paying $350 to get it repaired, I got it back two weeks later and everything seemed to be fine. Unfortunately, it was not. I started having troubles getting my computer monitor to show anything, it would just give me a black screen. I could hear the windows sound, but nada on screen. So I proceeded to call HP again because they obviously missed something during the repair process. So three weeks after my first call I send my laptop in again (this time free of charge) and get it back about 2 weeks later.

It seems to work fine for a while but I started getting the same black screen again on startup. I started noticing that after transporting my laptop this would happen, but it happened a few times when I would simply move it from one room to another. I discovered that if I waited a while or simply jiggled the monitor my screen would come back on. Or, if I shut down, popped out the battery for 10 seconds and started it back up with the battery and power cord it would work again. And, being a college student who needs her laptop, I let the issue drop and kept on with my laptop faulty repairs and all. (Also, when my computer was on, if I jostled or put some pressure on the bottom right side where the crack starts my monitor would turn black until I released the pressure)

I got this black screen many times over the next 6 months (from Dec. to June of 2012) up until recently (a few weeks ago) I started getting a white screen with vertical (and sometimes horizontal with the vertical) black lines. Once again, I found that if I jiggled the screen my computer would start up just fine. I would have sent the laptop in but my 90 day warranty was up and I needed it for class still. I recognize that sending it in would've been best but I was also worried that I would send it in, be without it for two weeks, and then get it back still broken.

Well, finally tonight I turned my laptop on, had the white screen with lines which went away after jiggling the screen a bit, I was on internet explorer, when suddenly my internet closes and my computer powers down. It then tried to start back up but after the HP invent logo all I got was a black screen with a flashing white cursor/underscore. It will not budge from this screen no matter what I try.

If you have any suggestions (that a computer dummy would understand) any and all help is appreciated. However, I am seriously dissapointed with HP for not fixing my computer in the first place. I paid almost half of what I originally paid for the laptop just to repair it. And to not get it repaired? I wish I would've spent that $350 on a brand new laptop. And one that was NOT HP.

HP Recommended
If i were u, id suggest u have the entire laptop checked and not the screen only, if it persists, just sell it in parts and buy a new one
0 Kudos

HP Recommended
The display issue(lines) is due to the display cable been loose, and as for the notebook now no longer able to boot to Windows, and only displays a black screen with a blinking cursor, you may try to test your notebook Hard Drive.

Power up the notebook and tap the F10 key repeatedly on startup and select Diagnostics >> Primary Hard Drive Self Test.

If you receive any error for the drive, the hard drive has failed and you would need to purchase a new one to fix your notebook.

I will do that, thanks for the advice!

And as for the Primary Hard Disk Self Test, I ran it and it took a while but at the end it said "hard disk test passed" so I exited out and the black screen came back with the blinking cursor 😞

HP Recommended
You may try a System Recovery once to see if that helps, or you may visit a local service technician to get a estimate for the repairs.

You can try to access Recovery Manager using the f11 key on startup.

Data is lost incase you do proceed with the Recovery.

:robotsurprised:I know your issiue! Don't get the new laptop!It's a problem with your baterry and the screen.