I am going insane. I am trying to connect my new HP Thunderbolt Docking station G2 (120W) and when I try to install the firmware, it says the following:

It shows really weird behavior and it's really driving me nuts. What is working is the power as well as the DisplayPort connection. I have two LG 32" 4K displays connected. All the rest is not working and I can't figure out why.

I wasn't very smart, I hadn't activated the Thunderbolt connection and as such, it wasn't established, this has now been fixed and works now. The second issue still prevails.

With the displays, I have another problem of its own. The one display has a 4K resolution, the integrated display also shows 4K, but the second monitor only shows a lower resolution and I can't change it:

According to the following document, the docking station should be able to handle this load:

On page 11, it says that two monitors with 4K would be supported with my docking station.

Can anyone help me out here? I am desperate and I regret that I spent as much money as I have on this and end up worse than with the setup of a six-year old laptop + docking station.

- Several devices connected to the docking station to no avail

I think you should start with a BIOS update and verify that you have the latest version. After that verify that your security settings in BIOS are set to no security.
If it still isn´t working try to run HP image assistant and see who drivers are missing.

Edit: I've now run Image Assistant and updated every single driver and still to no avail. I am not mistaken in thinking that the laptop can handle three 4K displays (2 external + 1 internal display), correct?

I thin k it should be possible with two external displays.

The setting I´m talking abouit is this one. 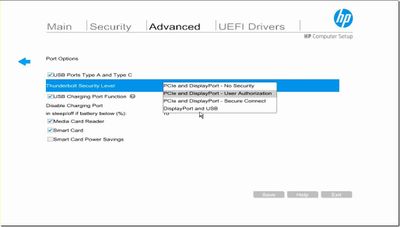 The setting for no security doesn't appear for me. I still wasn't able to get the monitor working. Maximum resolution it shows is 1920x1200.

at page 7, if one 4K display is connected to DP port , the second MUST be connevted to Thuberderbolt 3 port.

IT's the USB-C port on the right side of the displayport, looking the docking from the back.

you will probably need an USB-C-to-DisplayPort adapter if you LG 4K display deons't have a USB-C input video port.

That's a good input, unfortunately, the way via USB-C didn't work for me either. It was actually worse in a sense that it didn't show any output and didn't seem to be recognized by the laptop. I will have to try again though, maybe I've made a mistake, but even the Thunderbolt authenticator didn't recognize the laptop.