after already woundering about the idle cpu/gpu temps and the idle fan noise I now discovered how good the performance of this "workstation" notebook is. I am posting this in the hope that someone can confirm my data or tell me that something is wrong with my unit.

Today I saw that the cpu clock-speed was dropping below the base clock speed of the cpu. So I started to do some testing with the stresstest of Intel XTU and Furmark + CPU Burner.

The first test was running the cpu stresstest of Intel XTU.

After already 5 mins of stressing the cpu the clock frequency already dropped to 3.33GHz while the normal boostclock of the I7-8750h is 3.9 GHz on all cores. This drop was due to the thermal limit of the cpu. It had reached 95°C.

My second test was running FurMark plus CPU Burner with 11 threats. Thus the gpu was running on 100% and the cpu on about 95% load.

Here the core clock dropped town to 2.02GHz. 200MHz below the base clock of the cpu! As you can see this was this time due to the power limit. Even though the powerlimit of the cpu was lowered to just 20W it still reached 88°C-90°C, same as the gpu. 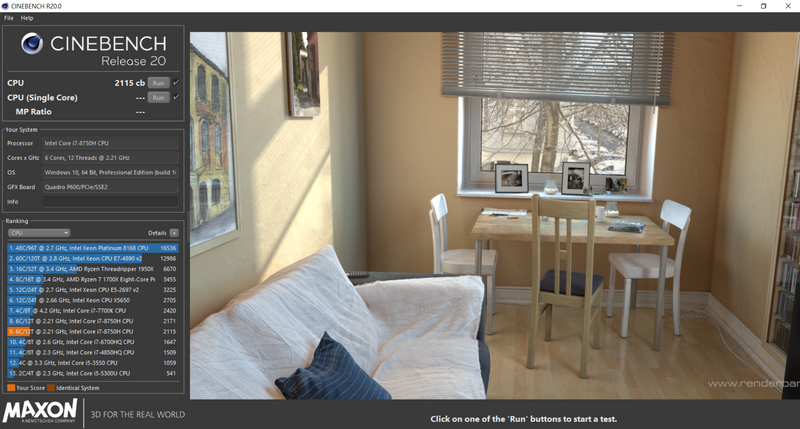 I have to say I am shocked at those performance numbers. The integrated gpu, a NVidia P600, has a TPD of only 25W showing that the cooling system is completly underdimensioned.

Selling this laptop as a workstation is just a joke. The performance of the cpu is serverely reduced because of the poor cooling of the notebook.

I still hope that my unit is defective, however I doubt it after seeing the tdp during cpu and gpu test.

You basically have HP's low-end, budget Ultrabook profile workstation with a full voltage CPU so HP had to implement solutions to adequately protect it from thermal overload. I have the flagship HP ZBook 17 G5 and your laptop performance is well in line with workstation-class performance. This is a workstation built for stability at high CPU loads indefinitely. It is not a gaming laptop.

If you want to eke out higher performance from the laptop use Intel XTU or Throttlestop to undervolt the CPU and iGPU. I have my E2176M CPU undervolted to -.150v and the iGPU undervolted to -.080v. Settings for your computer will differ from mine slightly. I have also repasted the CPU on my unit with Gelid Extreme thermal paste and I replaced the thermal pads supplied by HP with Fujipoly Extreme pads. I use Throttlestop to increase the power-limit throttling to 65W on my CPU. Do these things and you will end up with very high scores for your respective CPU. My E2176M scores are now at the top of Ciniebench and GeekBench for that particular CPU, even beating out higher spec i9 and E2186M chips.

I am sorry but the arguement, that it is the low end model does not work here, because the hardware could work much better. It is just that the cooling solution was not designed to cool the hardware for a longer periode of time.
I do not expect overclocking etc. out of a workstation but a reliable, constant system performance. As you say it should provide a high CPU performance for a long time. If it has to throttle down to less than 2GHz under a full load it is not delivering the performance. What I would expect is, that the CPU would be sitting in the powerlimit constantly and so I can not accept that thermals are the problem.
Running at 95°C with a CPU only load is just not what I expect of a so called "workstation". It limits the power of the cpu and decreases the lifetime massively.

Furthermore I would not call it an ultrabook over 2.5kg but that is also not what I expected.

My problem is, that this could have been easily avoided. You could have easily improved thermals by a lot if you made the chassis 1cm bigger, installed a second heatpipe and extended the heatsink. I measured only around 55-60°C on the heatsink while the CPU was at 95°C. Either there is a poor contact to the CPU or, more likely, it is designed to the absolute minimum.

Since you pointed out the 15/17 G5, which offer the same processor, I checked them out and as you can see they have two heatpipes. But that one costs more than double the money that I paid for mine with the same specs (CPU, RAM, Storrage) but with a NVidia P2000  (basically GTX 1050 TI) instead of the P600 (MX 150).
So now I understand why this laptop is designed the way it is.

I already use Intel XTU to undervolt it (runs stable at -0.165v) and now an external GPU. However I reduced the power limit to 30W to keep the temperatures below 80°C. And that is with the intenal GPU now completly deactivated.
I do not want to change the paste since I fear I might get in trouble with the warranty.

In total I have to say that I have learned my lesson. You can not just use the hardware specs to judge the performance. Apparently you can not expect to have the manufacturers design matching cooling solutions.
For me the fallout was not that bad, however if I would have bought the Xeon version with the P2000 I would be pissed. The P2000 has a TDP of 50W compared to the 20W of the P600. I do not want to know how much this version will suffer from throttling.

I knew this effort to assist you would be a waste of my time, and I wasn't wrong. Repasting a CPU is a basic skill that doesn't void your warranty, btw.