I downloaded the BIOS, launched "sp96091.exe", installed it, but the window shown in the image does not appear. The file was located in a folder and that’s it. How to write bios to a flash drive? 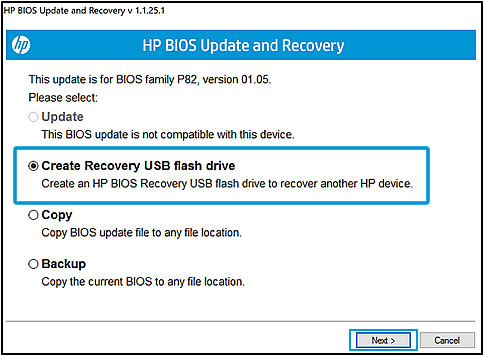 Why do you need the bios on a flash drive? You can choose the first option to update the bios directly from Windows.

I have the same problem like Korovke. I have to create an USB stick for update because the actual Windows Installation is not running. So I tried a new Windows 10 istallation from USB Stick, but the BIOS is not booting from the old BIOS. Now I hope to boot from USB after actualizing the BIOS. But for that I need the new BIOS on USB Stick.

It seems to be very old and the USB boot problem could be solved since 2013.

And Bastian: the screen obove does not appear. The sp96091.exe program will close direkt after copiing to C:\SWSetup\SP96091

Oh nice, I can reproduce the issue you are describing with the sp96091.exe. When I run that on my 850 G1 the dialog didn´t appear but the files where created inside C:\SWSetup\SP96091. When I got into that folder and manually run the hpqFlash64.exe I get the error:

The same is happening with the bios version F.73 (sp91622.exe), might be due to the reason that the bios update is checking if the hardware fits the bios and then stops. But that's only one idea yet, did somebody from you try to build an USB boot stick as mentioned here?

When I rename the 68ICE.CAB to ROM.CAB the dialog comes up when I re-run the hpqFlash64.exe and therefore could build the USB stick. The question is now do you guys need to rename the 68ICE.CAB or the 68ICF.CAB... The two files are there because the SP96091.exe contains the BIOS files for Notebook models with a 68ICE and 68ICF family ROM.

I solved the problem. We go to the folder with the files, then to the hpqflash folder, from there we copy your BIOS version (I have the 68ICF.CAB file - I looked in the BIOS information), insert the file into the root folder and rename it to rom.cab, then run the hpqFlash64 file .exe - a window for writing to a USB flash drive will open.

you got ahead of me 🙂

Great, it that solved the issue, please make this thread as answered so others can find that easier 😉