ZBook G6 - CPU drops to PL1 under any load

I am puzzled with my Zbook 15 G6, it's a base model with Core i9 9880H and Quadro RTX3000, upgraded with 32GB Kingston RAM in 2 modules.  It's been running fine for about 5-6 months after purchase, then very weird things started happening:

- CPU drops to PL1 (25W) power limit immediately after starting any benchmark. No thermal throttling reported in software yet. 25W PL1 for an 8C/16T i9 CPU doesn't seem right at all aswell.

- The notebook will randomly shut down when battery is ~<40% it will always shut down when I try to run a benchmark when on battery and at around 30-40% or lower charge, the millisecond I press the "start" button, the computer shuts down. 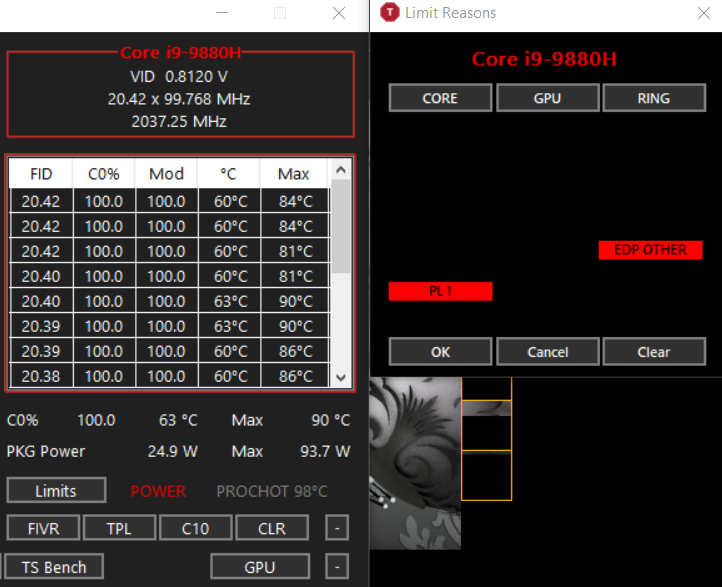 Any ideas? I'm thinking the power regulators or the CPU itself are probably about to die any moment.

can you make sure the BIOS and drivers are up to date? HP Image Assistant helps with this

Updating the BIOS made it even worse it seems, now even under idle the computer stays pretty warm and drains the battery even quicker. Big downgrade 😞

When it shut down yesterday, it dropped to 0% and gave a battery error message at next reboot. The temps aren't right aswell, it shouldn't idle at 60*C no matter what.

try doing a BIOS reset to defaults, from the F10 menu

The notebook came back from HP RMA today, the battery has been replaced and they reinstalled the OS but it is still not as it should be and how it has been in the first months I got it.

It seems to work on the charger but it shoots up to 101*C under any load, stays at 100*C until PL1 kicks in and stays around 70-80*C @ 3GHz while making thunderous fan noise.

The worst part it still locks itself to 800-1100MHz and max. 15W when on battery, this is useless! I know running on battery isn't meant for heavy 3D workloads but I do feel the interface and overall response being laggy and much slower than how this notebook used to be, even Windows startup now takes ages, no matter if it's on wall power or battery.

I'm lost for words, pretty much about to call it a write-off and request a new notebook from our company.

Gave it a BIOS reset, now the PL1 dropped from 50W to 25W again so we are back to square one. Unbelievable, besides the battery it feels more broken than it was.

I now got my hands on a colleague's 15 G6, same spec as mine and bought on the same date. Both have the same issue.

His PC: RMA'd once - probably replaced the mainboard

Both macnhines when at dekstop - 70*C idle with 8-11W CPU package. Exactly the same problem. Both cases are warm to touch, changing BIOS versions does nothing.

Are Microsoft or Nvidia secretly mining crypto's on our machines? It surely does like it. I even wiped both drives clean and reinstalled windows 10 but it didn't do much.

These Zbooks were never as hot as this, this started happening on both after a couple of months of use and it is technically impossible to have them idle at 70*C with 10W CPU package power.