I've been wanting to post this info for some time, and am building up a Z600 so took some pictures. Here's the How-To:

The +5V DC that USB 2 and 3 lives on does not come up from the PCIe slots..... the card will need a supplemental power source, and this HP card's SATA power connector has tolerances that precludes many SATA power adapters from fitting perfectly.  You can carve on the rubber some, or buy a perfect fitting adapter which I have located, via Mouser.com, made by Molex itself.  The Molex brand part number is 88751-1311.  In a Z600 I put the card in the very top PCIe slot, just above the top video card.  If you buy the whole kit from HP it will have a proper SATA power adapter to use, and that whole kit has Options part number QT587AA, costing about 70.00 with shipping.  That will not include the 3.5" to 5.25" adapter kit detailed below.

There are two HP USB 3.0 PCIe cards, only one of which you should buy.  It is the HP "2x2" card (2 ports at rear, potential for 2 ports out front via an on-card USB3 header).  The older original card provided only 2 ports, at the rear, was based on a NEC chipset (which was sold off to Renasus), and is not really supported.  The card you want is based on a Texas Instruments chipset, which is the same as is built into the Z620/Z820 motherboards, and thus the driver installer SoftPaq from HP for that is easy to find.  For example, google search for Z820 drivers, go to the W7Pro64 OS section, and in the Driver-Controller listing you'll find the drivers installer released 6/26/14 (SP65043).

Do not try to load drivers until you have properly installed and powered the card up..... all parts of the card need to be activated with +5V DC for the driver installer to work properly.  The bare card you want off eBay can be bought new, by searching for part numbers 661320-001 or 663213-001.  As is usual, these are two HP numbers for exactly the same part.... Assembly versus Spares part numbers.  I like the Alan guys, and have also bought directly from China.  Cost will be roughly 25.00, or 18.00 from China if you want to wait a couple of weeks. 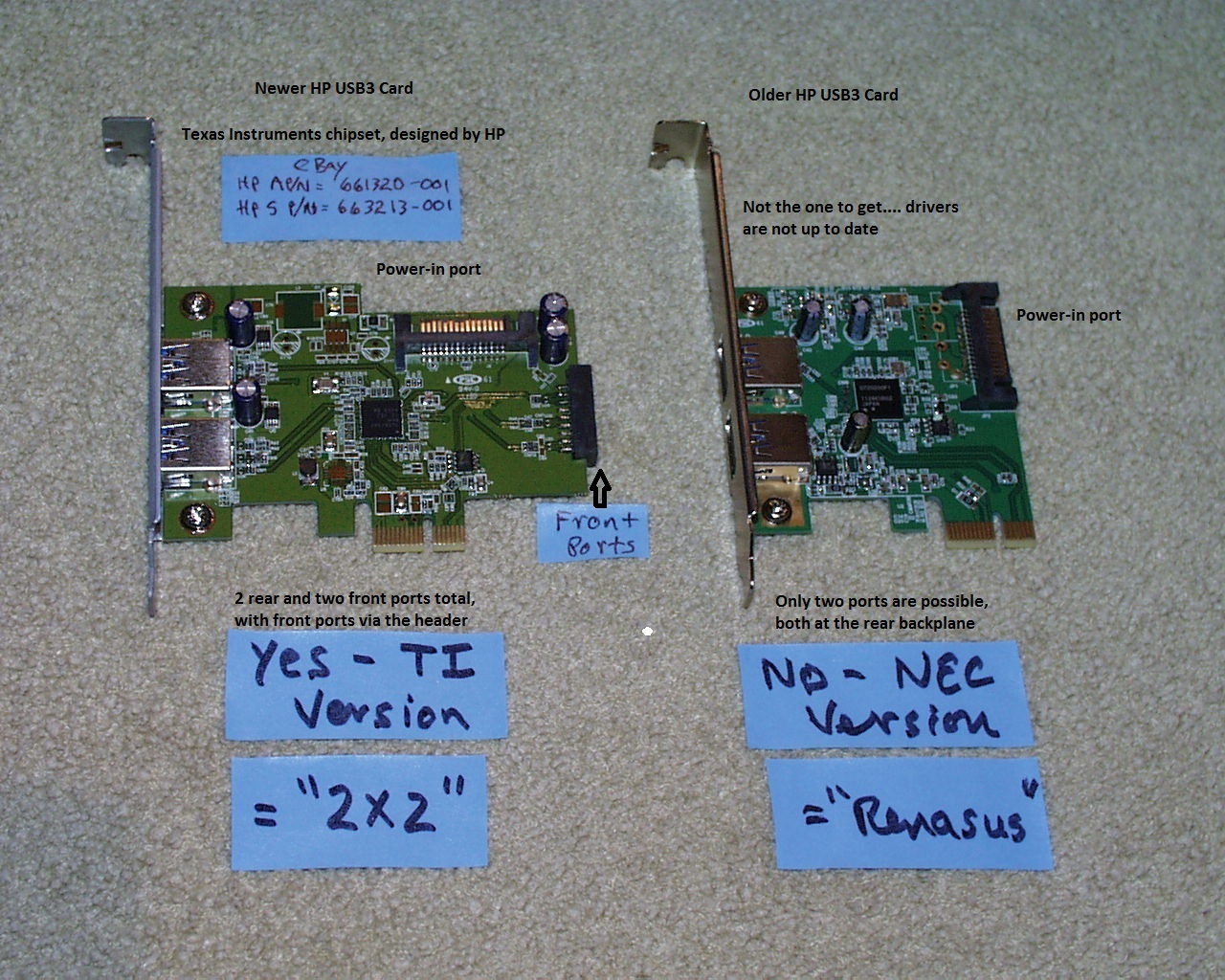 Now, how to get the potential 2 front ports into reality?  I have found what I consider the best 3.5" front interface that works perfectly in the floppy drive bay of the xw6600 and xw4600, etc, and also works with a HP kit for situations in which you need to use a 5.25" optical drive bay-to-3.5" form factor adapter.  For example, in the Z600.

The 3.5" interface I use is made by Akasa, part AK-HDA-06BK, and it also has a part number of AK-HDA-06BKV2.  How this v2 is different from the original I don't know, but I have only been receiving the v2 these days.  It has a high quality anodized brushed aluminum face, and a rear 2-cord cable that plugs into the USB 3 card's header to feed the 2 front USB 3 ports.  The cable is long enough you can use it in an xw8600, but it can be coiled and zip tied to the frame as short as needed.  I use Lexan clear adhesive to glue in a thin wood support under the cable's front interface for added stability shown in one of the pictures below, but that is not really needed. 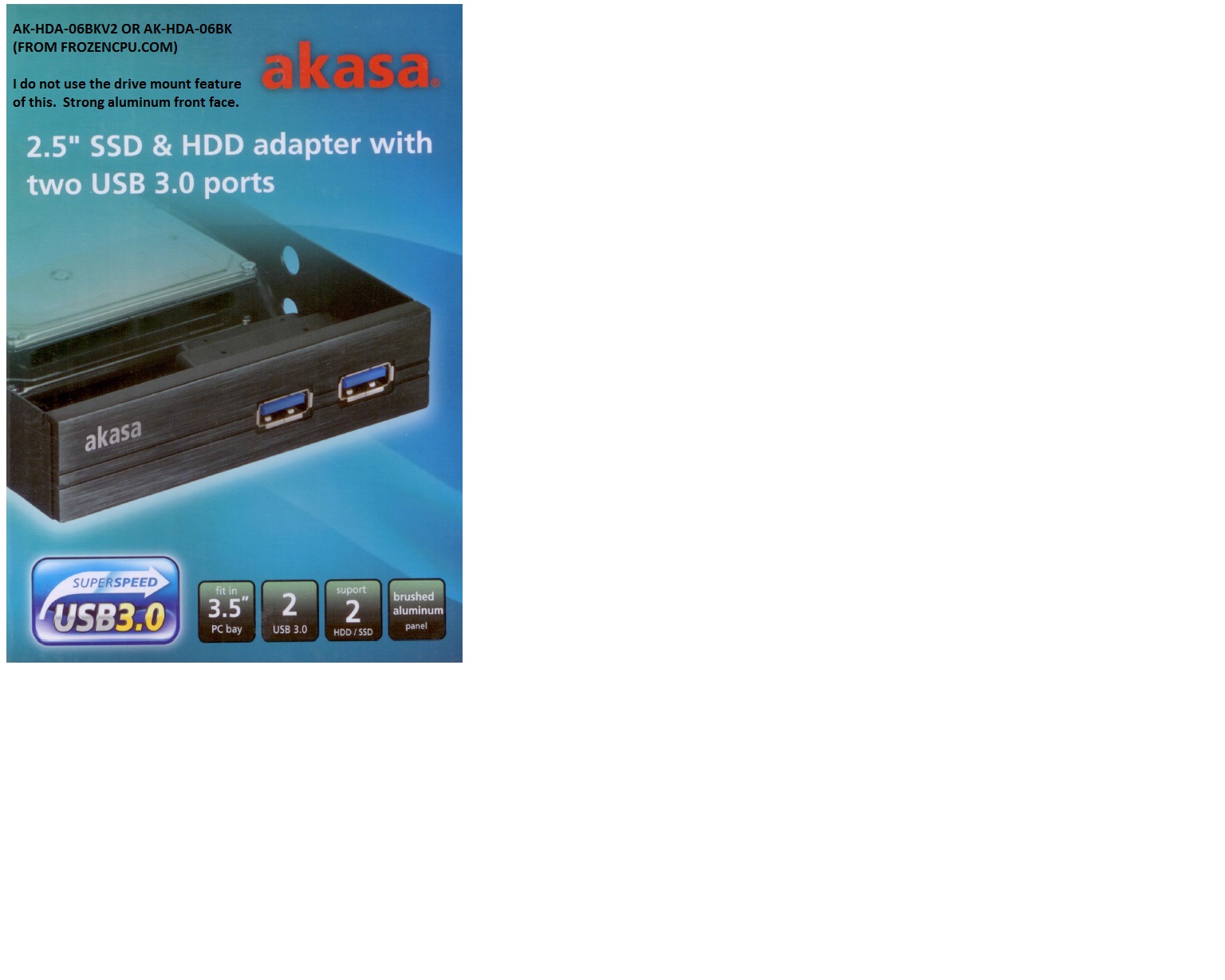 The parts all together: 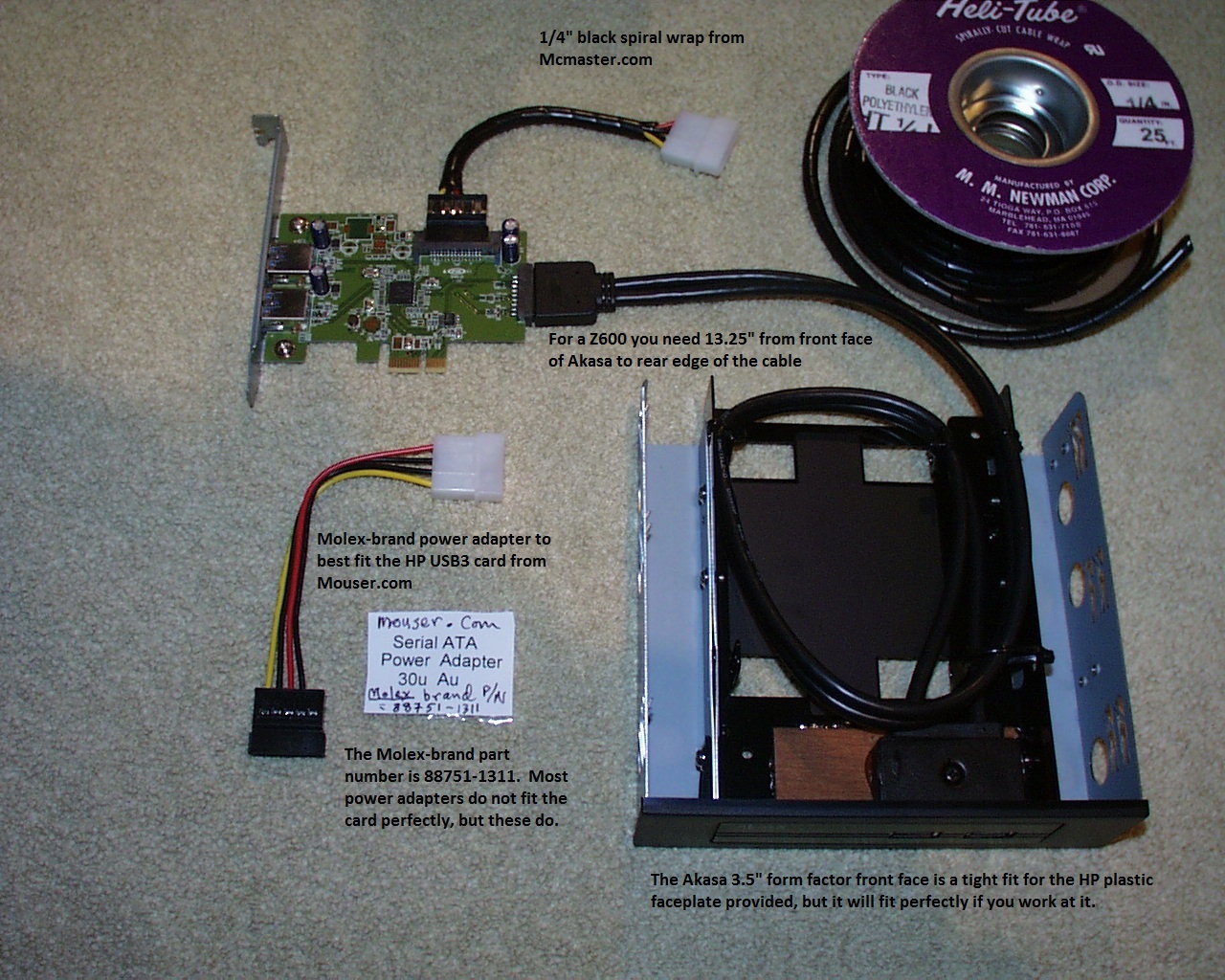 The 3.5" to 5.25" adapter kit is made by HP, is reasonably priced, and I get these off eBay new at about 11.00 each by buying 4 at a time under a best offer option.  The part numbers to search for are 48855-002 or 48855-004.  The metal rails are of usual HP quality, but each rail has a punched projection that you should file/drill off so things fit perfectly.  That must interface with a hole in the 3.5" HP media card readers these kits were intended for originally, and I marked that with an arrow on the picture below.  The Akasa front face is a tight fit into the HP plastic faceplate, but it fits very nicely once in.  Use 3 M3 "washer-head" metric screws for each side rail, and 4 of the 6 total needed will come with the Akasa.  At least use washer-head ones out at the plastic faceplate tabs end of things.  The assembly is very solid when done, and will make sense once you start. 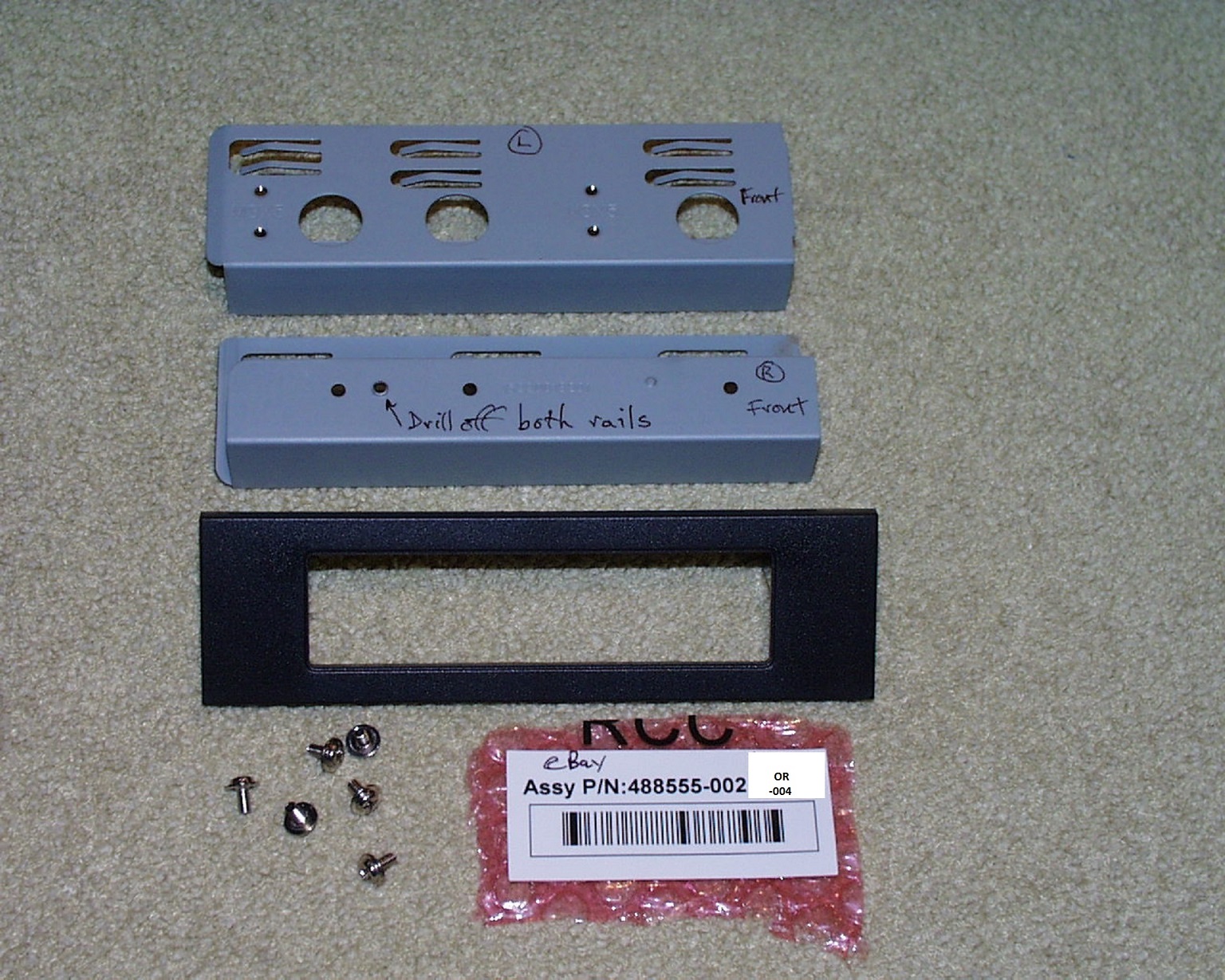 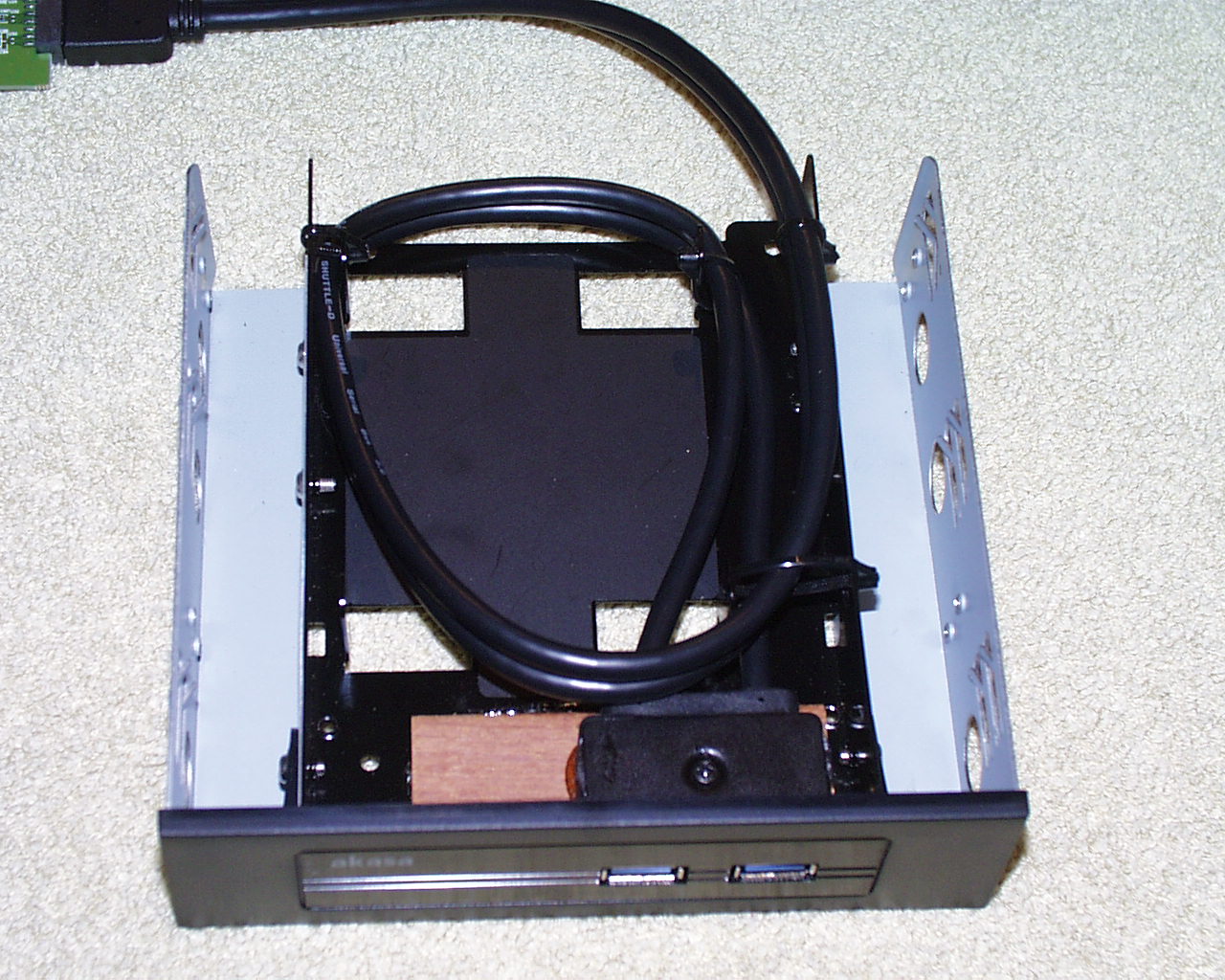 For a Z600 with the card in place you need about 13.25" from front of the Akasa face to tip of the cable plug for a perfect fit.  I coil and zip tie the cable inside the Akasa frame so that the cable exits from the right rear of the frame, viewed from the front.  That places the cable near the motherboard, and here is a picture showing how that leads to the card's rear header: 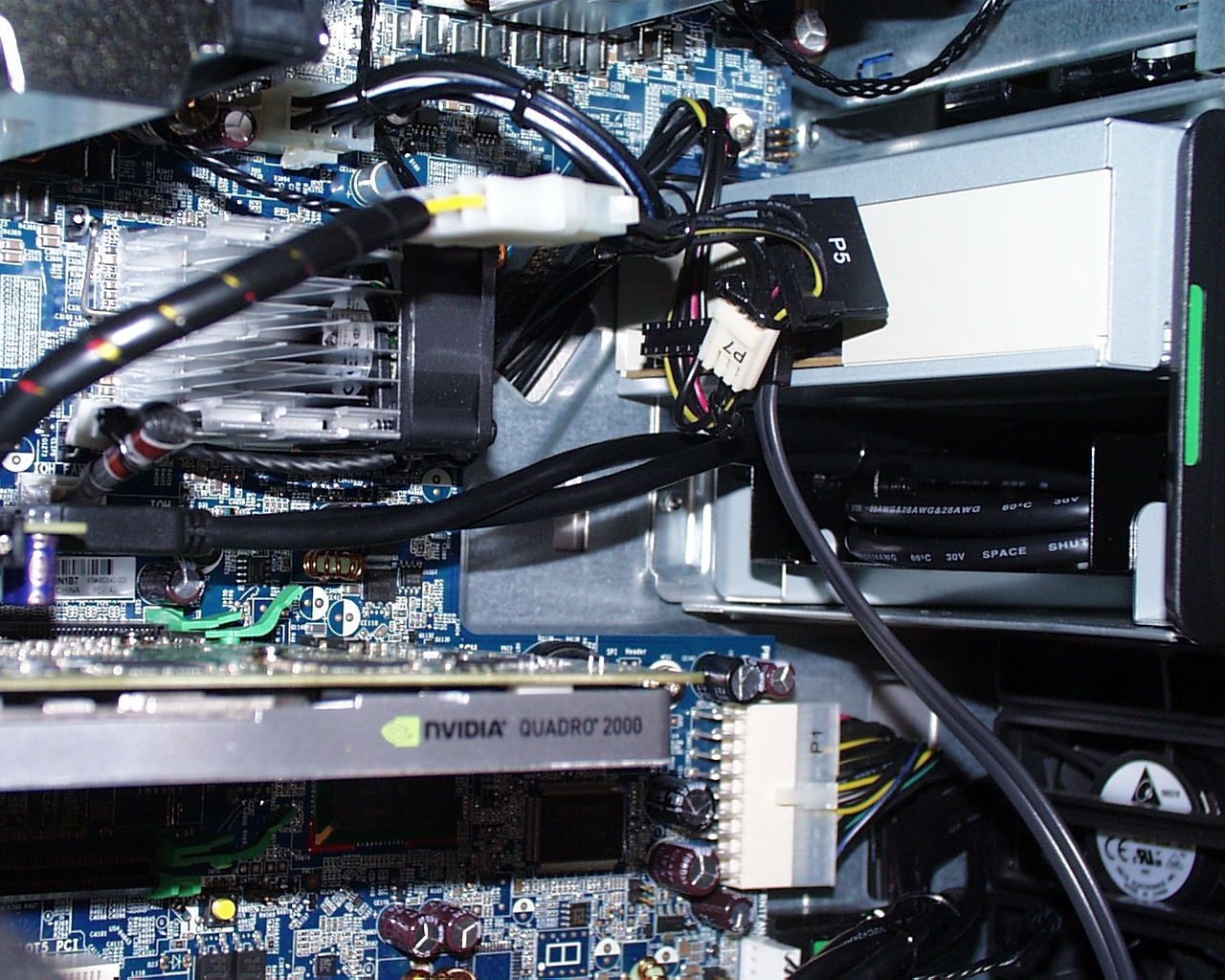 Dan_in_WGBU, our favorite HP engineer who helps us here, has posted on how much work HP put in to optimize the USB 3 implementation in the Z620 workstations, and I believe they also did an excellent job of engineering this USB 3 add-on card.  The speed benefit over USB 2 is remarkable, and I have been using this approach in my xw workstation builds for about 3 years now.... rock solid.  I have three pics showing the implementation in a xw6600, Z600 and Z400, below: 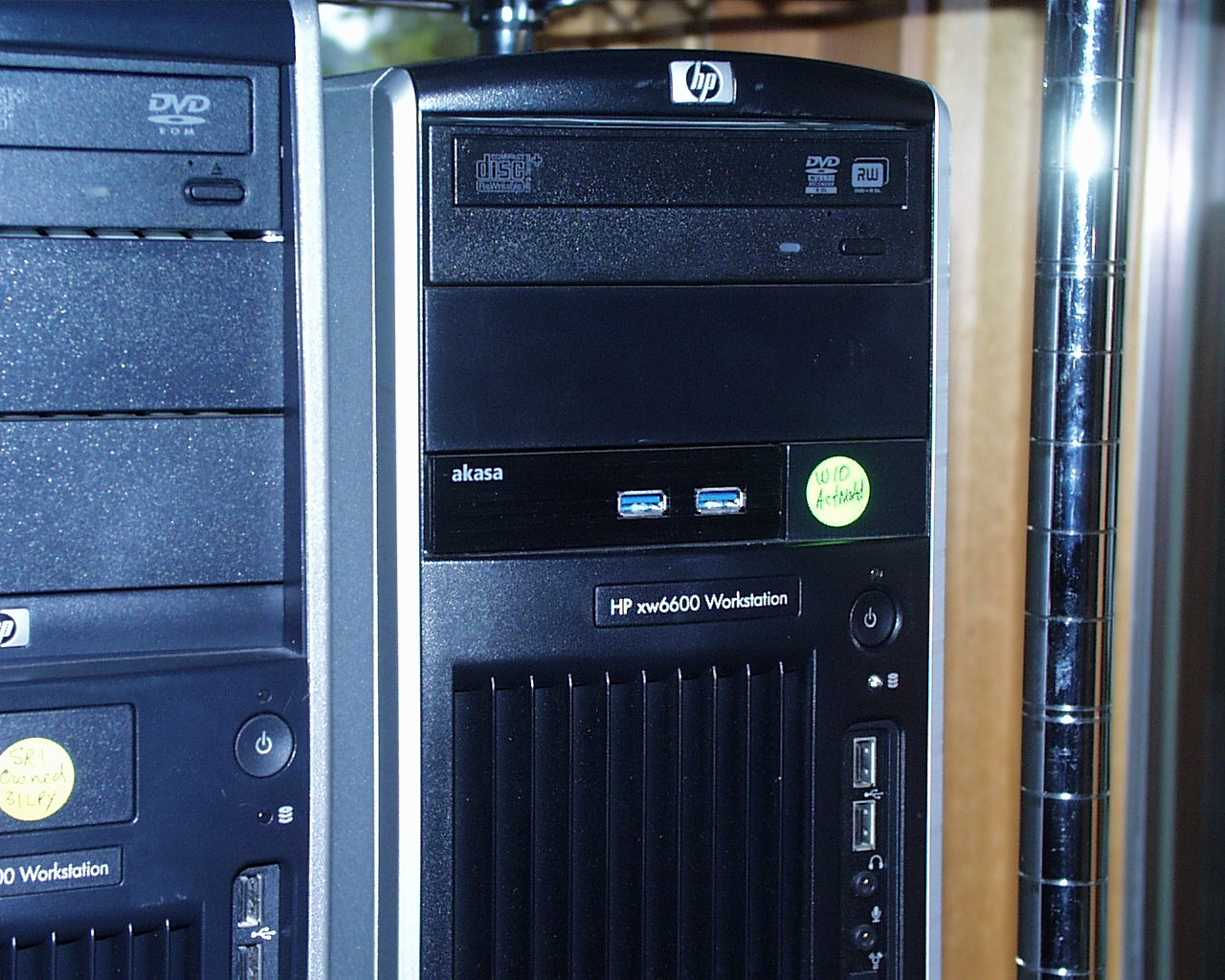 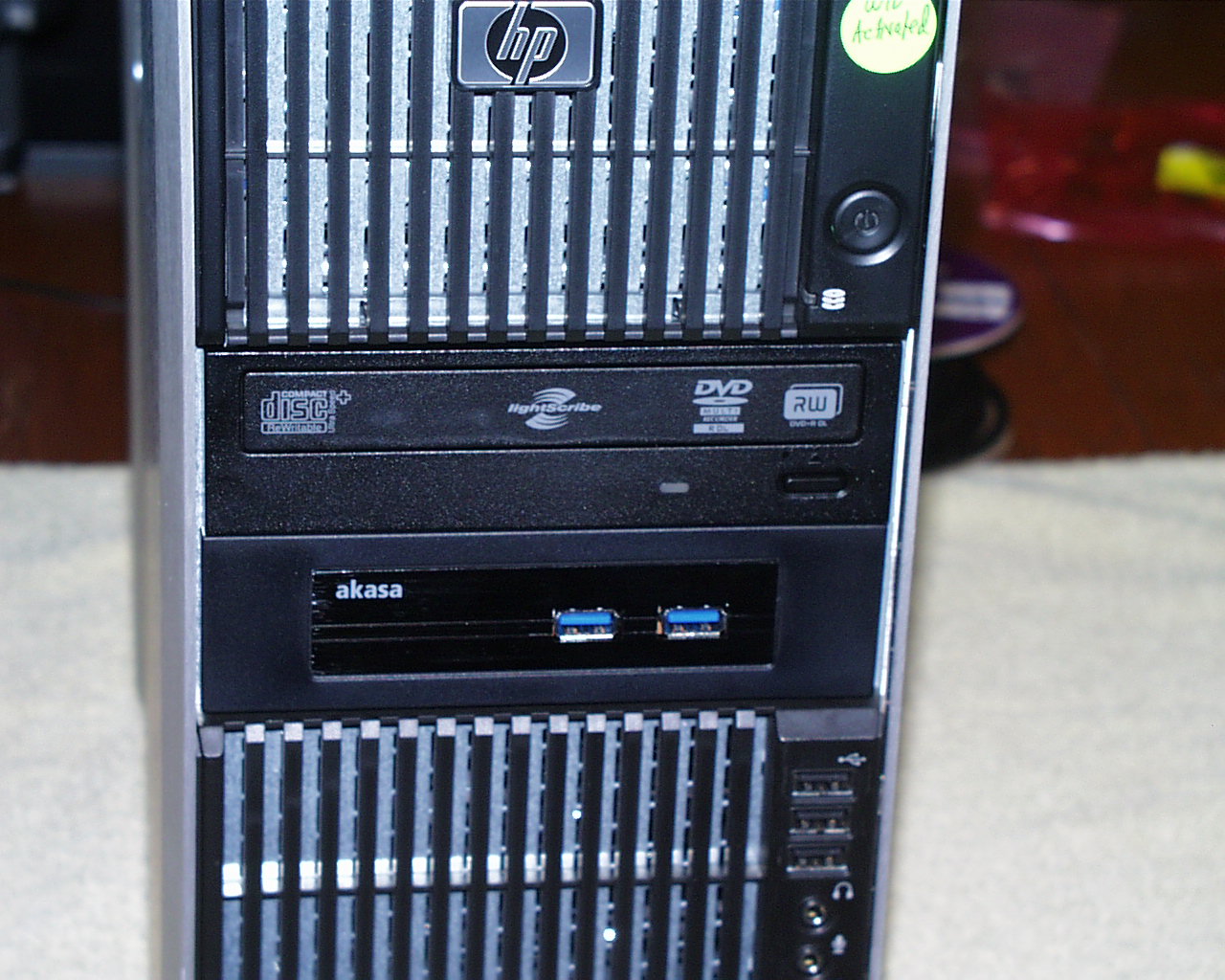 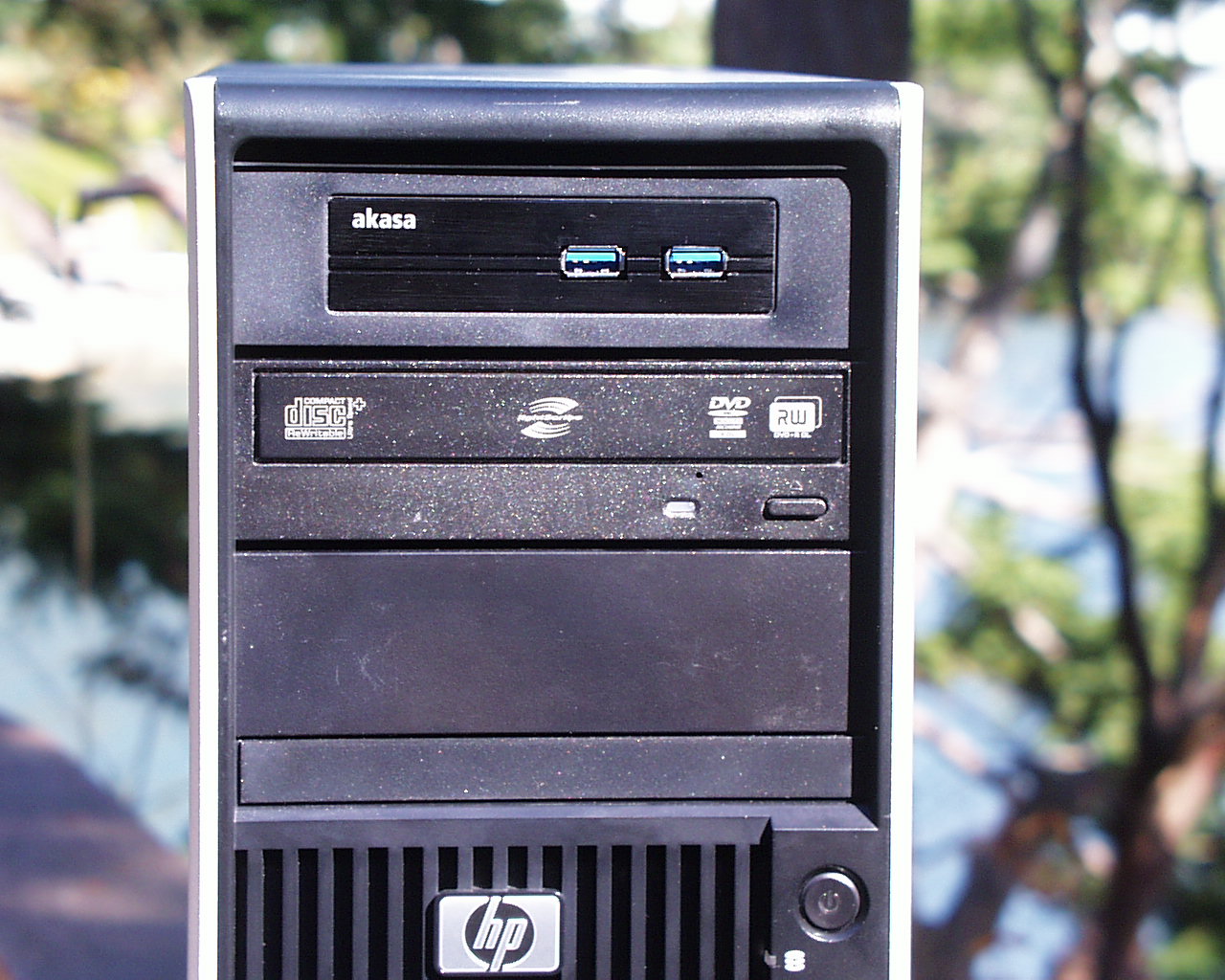 Finally, I very much like to use eSATA for backup, Acronis image captures, and Acronis build cloning.... I have found a short high quality BizLink eSATA backplane adapter off eBay shown below.  The key is to search for D88522-001.  The latching SATA plug is a bonus, too.  I put that in the very bottom PCI backplane slot, and most of the HP workstations have BIOS settings for tuning a SATA port for eSATA use.  In the xw6400, which does not have this BIOS option, I just run the adapter at normal SATA 2 settings.  A number of HP workstations do not support "eSATA hot plugging", but the Z400 and Z600 do, from my experimenting with that.  It is a chipset limitation if it can't. 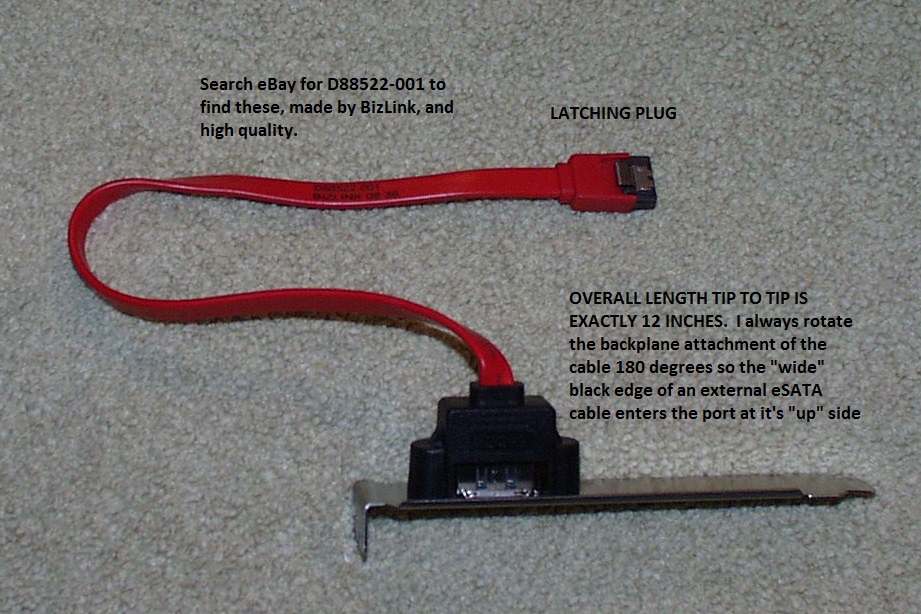 EDIT:  The best source for drivers for this card is to go to the Z620 or Z820 HP drivers site and navigate in there for a 64-bit OS such as Windows Pro 64, and find the TI drivers for the motherboard's USB3 chipset.  Those same ones work for this card perfectly.  Make sure to properly power the card up on the motherboard via the power adapter I showed so that the installer can see all the card parts and load the drivers correctly via that.

This card also works fine under Windows 10 Professional 64-bit.... If I recall correctly the W10Pro64 installer automatically recognized its chipset and automatically installed good drivers that are a bit more recent than the W7Pro64 ones.  I have not seen those as a standalone set of drivers.  It makes sense..... HP and TI have good relationships with Microsoft, and they would want to have these cards and the chipsets on the ZX20 motherboards be able to function under W10.

The pictures I posted show the difference between the older NEC (which sold this end of their business to Renasus) and the newer much better Texas Instruments card.  Turns out HP liked the TI chipset so much that they then integraged it into their Z420/Z620/Z820 motherboards.

Thus, the easiest way to find the correct drivers for your TI based card is to go to the Z620 drivers download site and find them there.  Those work fine on both the card and the motherboard chipset.  This card works fine on our xw6400, xw6600, xw8600, xw4600, Z400, Z600 and Z800 workstations.... same drivers.  As explained, power up the card properly before loading the drivers or the installer will not see all the parts and not load things correctly.

Great post. I've purchased what I believe to be the correct card for my xw8600 - HP USB 3.0 SuperSpeed PCIe x1 HI343-001 part # 663213-001 - but after some hours of fruitless searching, cannot find the appropriate drivers for the card. Any pointers where to continue looking would be most gratefully recieved.

I replied to your other post requesting drivers for that card, and I believe I found the ones you need...

The pictures I posted show the difference between the older NEC (which sold this end of their business to Renasus) and the newer much better Texas Instruments card.  Turns out HP liked the TI chipset so much that they then integraged it into their Z420/Z620/Z820 motherboards.

Thus, the easiest way to find the correct drivers for your TI based card is to go to the Z620 drivers download site and find them there.  Those work fine on both the card and the motherboard chipset.  This card works fine on our xw6400, xw6600, xw8600, xw4600, Z400, Z600 and Z800 workstations.... same drivers.  As explained, power up the card properly before loading the drivers or the installer will not see all the parts and not load things correctly.

As of 3/17 here is the best source for the latest drivers, via the Z620 drivers site:

Remember to always power the card before you install the drivers.... some of the card's parts will not be seen by the installer until it is powered by the SATA power cable that you add on, and thus if you install before that you'll get an incomplete install.  Which is hard to figure out.  Don't ask how I know.....

Thank you for posting in this thread. Unfortunately based on when the last response was made, I have closed this thread to help keep comments current and up to date. We recommend starting a new thread for your issue by clicking here.
To be more helpful with your post, you can add key information if you desire:
1. Product Name and Number (please do not post Serial Number)
• Example: HP Pavilion DV2-1209AX or HP Deskjet 3000 Printer CH393A
2. Operating System installed (if applicable)
• Example: Windows XP, Windows Vista 32-bit, Windows 7 64-bit
3. Error message (if any)
• Example: ""Low disk space"" error in Windows
4. Any changes made to your system before the issue occurred
• Examples: Upgrading your Operating System or installing a new software; or installing new hardware like a printer, modem, or router.
If you have any other questions about posting in the community, please feel free to send me a private message!