Hello everyone, I would like to know if I can add internal storage (Seagate Barracuda 5TB) to HP workstation Z2 Mini 4G.

And if so ... do i need those special screws, which need to be ordered from HP? I have read about it in another post. Or how else can I mount it?

Thanks a lot in advance~

The best thing would be to open the Mini and see what you have and what you may need???

How to Remove and Replace the 2.5in Storage Drive Assembly for the HP Z2 Mini G3 and G4 Workstations:

Let us know what you find.

thanks a lot for your reply.

I haven’t bought the Z2 Mini 4G yet. Wanted to check couple of things before purchasing it.

Anyway ... once i got the Z2 i will have a look inside and let you know.

I have recently purchased a Z2 mini G4 and would like to add a 2.5 inch Sata internal drive.

The system come with a loose sata cable for this but the cable has 2 connectors 1 sata and 1 2 pin. on the PC side.

Any ideas or a photo would be great.

Not sure what you have.... how about you post a photo or two? 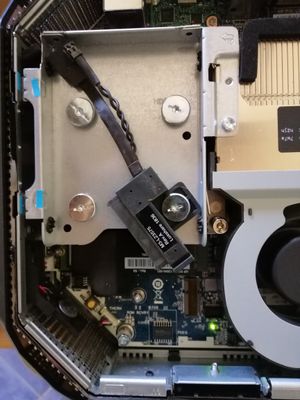 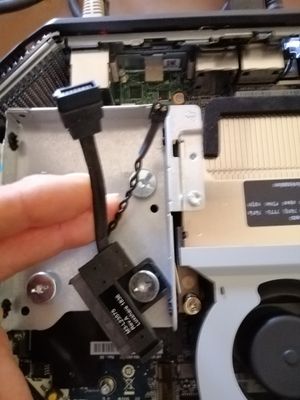 The photo on the left show thes 2.5" caddy and the sata cable delivered with the Z2 mini G4.

The sata connector from the PC is in the lower righthand corner.

The photo on the right shows the 2 connectors on the sata cable. It is the righthand 2 pin connector that I cannot find out where to connect to on the mother board.

I don't have one of those workstations but the pics help.  The bigger plug end on the flat cable appears to be a standard SATA data port.  The coiled black 2-wire cable feeding into the combined SATA data/power end that plugs into the rear of the drive must provide power (+5VDC for the 2.5" form factor HDD or SSD).  I have no idea where those two independent ends plug into on the motherboard.  Some of the other web sites show instead a thin ribbon cable with ribbon cable type end at the far end where your SATA data plug end is.  Many of those web pictures seem to be all of the earlier G3 version rather than you G4 version so they can be confusing.

It looks like you don't have the silver metal cover that uses two side tabs that slip in place and the one screw towards the middle of the case to trap the drive under the silver metal cover before you put the case cover back on..... do you have that set aside?  Update:  that is right there, under where they screwed on the SATA data/power adapter for safe keeping.  You can see the 4 side elastomeric vibration bumpers through which black M3 2.5" drive mounting screws pass through.  I have no idea where those might be stored, if at all, inside the case.

There also are some web images showing a series of cables that have temp sensing thermisitors including one that appears to be placed up over the top of the hdd/ssd once it is in place, with a small adhesive black tab to hold it in place.  Now I think those pictures also are of the earlier G3 version rather than of your G4 version.

Odd that HP gives you that part but not the instructions, and possibly not the silver metal drive cover plate!

Steve.... here is a pic of a similar HP drive adapter, NOT FOR YOUR WORKSTATION.... note it is 2-wire for power also, but using what appears to be a 4-pin white power plug end (using only 2 of the 4 pins that plug end could accomodate).

I'd take a look at some net images of your workstation with the optional 2.5" drive in place and hunt around for the port near the range that short set of cables allows when the drive rear end is facing the correct direction.  The matching motherboard port for your two-pin plug end should be findable using that approach.  Or, HP gave you the wrong adapter (I doubt that).

After added searching I believe your adapter has the SATA data and the coiled SATA power cables built into the adapter so that they run 90 degrees to the left rather than like this one where they both run straight rearwards away from the drive edge.  The reason they look like they run 90 degrees to the right in your pictures is because that adapter is screwed down for safe keeping upside down, so we are seeing its bottom rather than its top in those images. 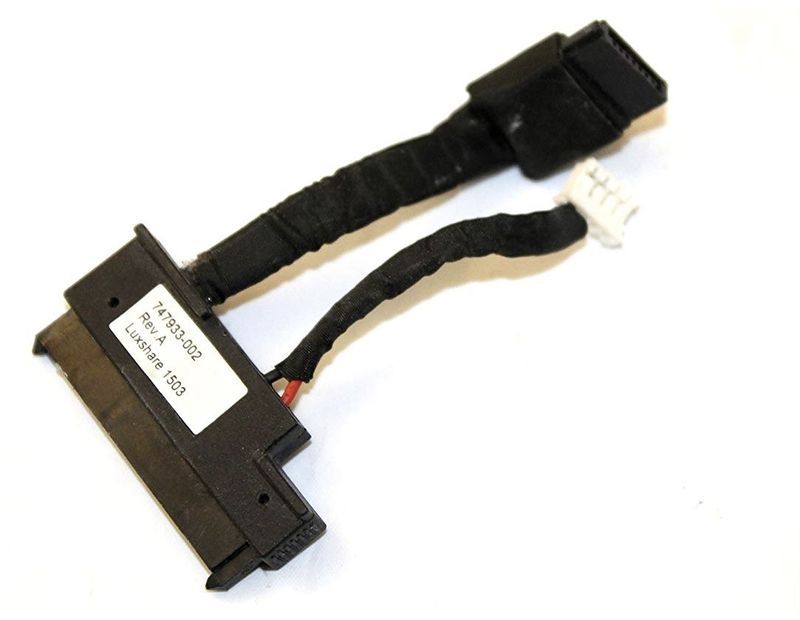 NOT for your workstation!

If it is a power connector that makes sense. I will look on the motherboard for something marked SATA PWR or similar. Unfortunately there are quite a few 2 pin connectors on the mother board in that area, and I am sure you appreciate I am not just going to try trial and error.

The images you mention with the thermal sensor are, I think from a G3 not a G4 as my machine does not have a sensor cable in that area and the cable supplied does not have the clips as shown. In fact I think that all of the HP videos about this machine are made using a G3 and there are several differences, minor but important.

If I could get a good photo of the motherboard or a decent schematic that would help a great deal.

Thanks for your effort 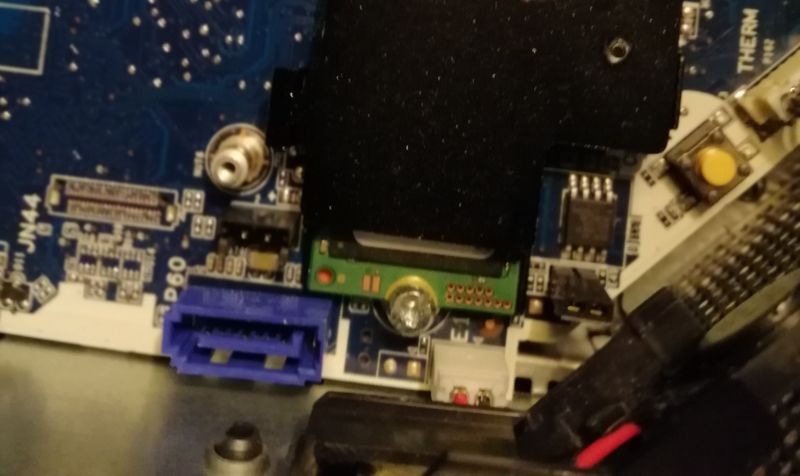 The thought struck me to take some photos of the motherboard and then look at them in detail on my PC.

A vacant 2 pin connector. It is not marked as anything but it seems so obvious it must almost be the one I was looking for.

In spite of my saying I was not going for trial and error I feel so confident that this is correct I'm going to plug a drive in and see what happens.