Got a new refurbished Z820 and I was curious if I can actually make the BIOS recognize the NVMe and boot from it as a UEFI source.

Tried this and that , attempted modding a BIOS image for 03.94 , but no luck.

If HP has added that Z Turbo Drive will be available with the 03.92 BIOS release not long ago , why doesn`t the system have this storage device defined as a bootable disk anywhere in the BIOS.

SATA mode is set to AHCI , tried with AHCI+RAID and currently I`m in a rather looney mix between UEFI and Legacy (some sort of CSM compatibility).

If there is support for the Z TurboDrive , why can`t it be implemented with a DXE entry into the BIOS , so that I could boot directly from there ?

I am 100% sure this motherboard is fully compatible with NVMe and I`ll be greatly surprised if this support is only on OS level.

Does anyone have any idea > Thanks in advance !

you can not boot a nvme ssd on either system as the bios in both systems lack the nvme boot code, only the z840 and higher systems support booting from nvme

the z800 is a non uefi system, as such it will not support large booting partitions you must use 2GB or smaller it will however work with up to 6TB partitions/drives as a data drive (and should work with larger sized drives as  data only drives)

HP is no longer supporting the z820 and as such will not release a updated bios with nvme boot code, there are however some loot loaders like "clover" that can be made to pre load the required nvme boot code on the z820 however configuring a clover setup is not for beginners

currently (as this was written) there is no known way to modify a z820/z800 bios and have the modified bios accepted due to the z820's bios checksum check that prevents a modified bios from being successfully installed if you try to flash a modified bios the updater will say it completed successfully, but in reality no code will be written this behavior is the cause of many people thinking a modded bios has been installed when in actuality it has not

the HP turbo Z "G2" uses the same PCI-E carrier as the Turbo Z, but the SSD used is the NVME version of the SM951 and as such will not work as a boot drive on the z820

The Passmark disk score ro the Z Turbo Drive of 13751 compares to the average score for the Samsung SSD 950 Pro 512GB NVMe of 13677.   The Z Turbo was a very satisfying purchase not only because of the optimized performance, has a very efficient heatsink cooler of heavy Aluminum, and doesn't need a separate PCIe 2280 drive card purchase,  but as I bought a new one for a z240 that had never been used, as soon it was in the PCIe slot  (HP specifies the optimal slot)  it automatically installed and activated Windows- no driver was necessary.

The speed is impressive: 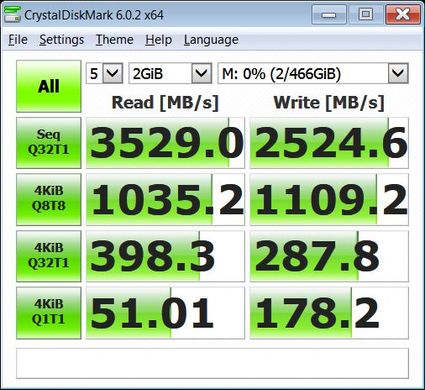 > actually very slightly above the maximum ratings. I like to run one drive for OS/Programs only and a second for files.

If an  NVME is a must, it is possible to install in a zX20, the aforementioned Samsung SSD 950 Pro 512GB NVMe which install a kind of BIOS module /driver- I'm not sure of the method used. there are also Samsung 960 PRO NVMe's listed on Passmark with disk marks up to 15630.  Consider a careful study of the Samsung 950, 960, and 970 PRO NVMe drives as all of those are listed as working in zX20 systems,  and as far as I know it's a standard Samsung installation procedure to install, not a modification.

That`s sad actually , I expected more from HP. At least for the latest revisions of the BIOS. Nervermind though.