Link to the new BIOS

The pc displays the updating message when it reboots but reboot again on the hardisk instead of updating the BIOS.

I have tried to update to 2.39 and it's doing the same thing.

What puzzles me is the fact that some of the pc are able to update but maybe 5% of our computers only.

If I do it via the network, HP is downloading the file and displays this message: 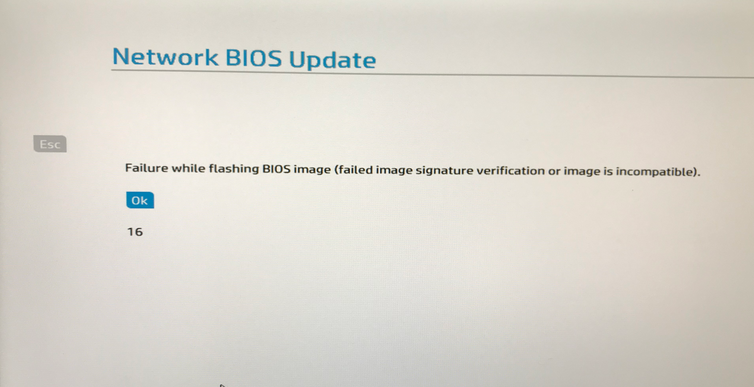 Does anybody have any ideas, what I could do?

I had to push the cmos switch on the motheboard to clear all settings to make it work.

There was no other way. Even the default settings in the bios menu was not enough.

I will have to send a couple of guys to do it manually....

The more recent Z series and business class workstations have gotten more complex in their BIOS and the ways to upgrade it.  I harp on upgrading BIOS from within BIOS as the safest way because it is using the most primative OS possible...BIOS.  Least chance of some other part of the OS messing up the process.

Below I have attached the instructions from the BIOS upgrader for your computer.  You download SP103811.exe and run it but early on cancel out of that.  Go to your C drive, and find the swsetup directory there on the root level.  Inside that you'll find the folder SP103811.  In that you'll find the folder HPBIOSSUPDREC.  In that is your BIOS bin file....  N03_0247.bin.  Copy that out onto your desktop.

Now shut down your target computer, plug in your thumb drive in a USB2 port if available, cold boot it, get in to BIOS, navigate to "Update System BIOS".  BIOS will know where to look for the .bin file on that thumb drive.  Proceed.  Walk away and come back no earlier than 10 minutes later..... there may be some restarts and even full shutdowns and cold boots that could tempt you to dink with your computer.  Be patient.  When it is done it will have launched your OS as usual.  Don't mess with it at all during this whole process and make sure it is truly sitting idle before you get working on it.

My highlighting includes reference to a higher level process initially but I like the F10 Setup BIOS Flashing method best, a bit lower down.

We have over 2000 computers with at least 15 HP models, and we always did it automatically without any problem with HPBIOSSUPDREC.It will be a real pain to do it manually, but I will test it on some of our G3, so that I can pinpoint the problem.

We're creative, but small fry compared to that!  Let me know if I can help you get the one-offs rolling, but I have no experience with enterprise simultaneous BIOS upgrades.

Good luck to you, Porta

I had to push the cmos switch on the motheboard to clear all settings to make it work.

There was no other way. Even the default settings in the bios menu was not enough.

I will have to send a couple of guys to do it manually....