I have HP Z6 G4 workstation with lastet bios version, but all fans keep to work on max rpm`s almost all time when PC is on and its pritty loud and load on cpu, ssd, ram is almost zero.Even when i`m in bios fans again ramp up to very high rpm`s(5000-6000).

We replace ambient sensor that shows 128 degrees temperature, but result was the same. After we change the motherboard everything start to work as expected, low noise, no fans ramp up, ambient sensor start to report correct temps.

Hi, the same issue happened to my Z800, XW9400 with liquid cooling and there seems to be "no real fix" as far as I know. you're the best option is to return it if it still has warranty or if not you can start to remove all drives and devices one by one, if you're experienced with computer hardware, specifically HP Workstations.

Ambient sensort temeperature give me 128 °C and i think this can be the problem but only fix is it to change it or not?

search this forum, i have provided specific details on this subject

Hi again, in response to my previous post, I've asked the authorised HP workstation reseller and they told me that this issue happens to all the Z800 and is normal as they were always loud. The Z820 and Z840 were much more quiet as improvements went along. I'll try the liquid cooling upgrade and I'll see what I can dig up with that otherwise I'll sell it and get a Z620 or switch back to Lenovo or move to a Dell T7600.

No, it is not normal for your Z800 to sound like a jet engine with fans going full speed.  It is easy to see if your "Ambient Air Sensor" is misreading too high/low.  The Z400/Z600/Z800 let you see the fan RPM speed and temperature sensors from BIOS, first tab.  Even easier is to download and install the HP Performance Advisor from HERE  and let it upgrade and look under the sensor section (after it has run go in the program to "Your Computer"/ "System Sensors".  Optix in the post above had one misreading at 128C (262.4 degrees F).  What is yours?  Here is an example from a Z400 I had handy today: 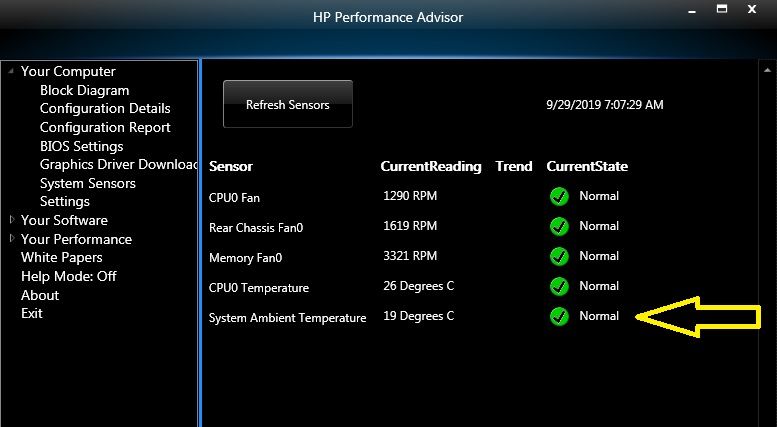 If that sensor goes bad then the motherboard sees the outside air coming into the case incorrectly as way too high (usual event) or too low (rare).  Regardless it goes into crisis mode and ramps up multiple fan speeds.  I doubt you have just a normal amount of noise coming from your Z800.  I also see an incentive for the company you bought the Z800 from to shine you on.

The temperature sensor ("thermisitor") is built into the front on/off cable for all the HP workstations I have seen, as one of several sets of wires carried in that bundle.  You can look these up in eBay and get one and replace it yourself.  I had to do that with a Z600 and it is not that bad of a project.  The HP spare part number is 534474-001 and the HP assembly part number from eBay searching is 468625-002.  Use eBay and Google with those two.  Below is a picture showing the whole cable, and the thermisitor is out front near the speaker showing up near the end of the short heatshrink, having what looks like a light gray/black wire pair coming towards it before the heatshrink hides that.

If that Z800 came with a bad thermisitor I'd demand a replacement Z800.  My Z600 years later still reads correct nice cool ambient air temp after I did that cable replacement.  No, it does not happen with all these workstations, and it is quite rare in my experience.  Here's two pictures for you: 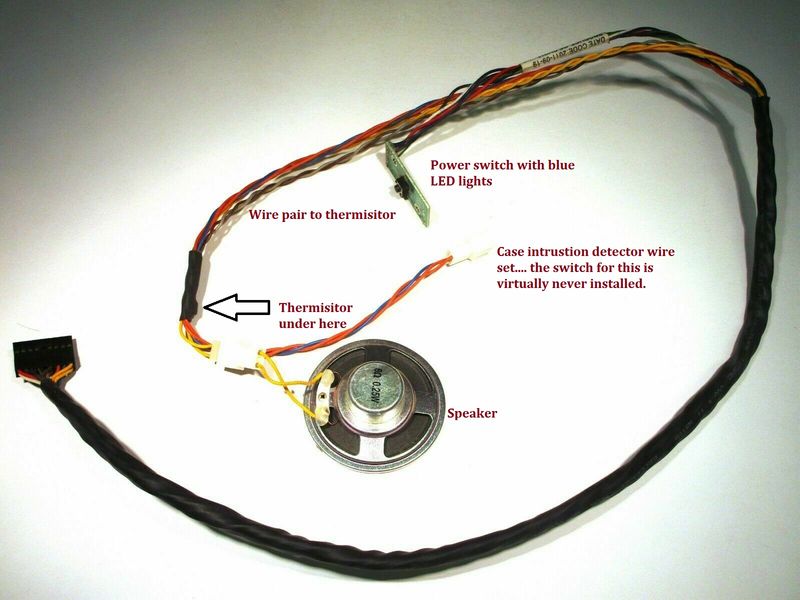 We replace ambient sensor that shows 128 degrees temperature, but result was the same. After we change the motherboard everything start to work as expected, low noise, no fans ramp up, ambient sensor start to report correct temps.

Yes, good point, the same issue can come up from a problem in the motherboard's PWM fan control circuitry but that has been reported on this forum only very rarely over at least 10 years now.  It usually is the thermisitor reading wrong......