I have an old HP Workstation Z420 (v2), and I would like to change the power supply. But HP had once again the "brilliant" idea to use proprietary connectors (why make simple when you want to make complicated ?, hard to find, and certainly not cheap !) Anyway, I'm looking for an adapter that can be connected to a standard ATX power supply: it's connector number 32 on the attached motherboard diagram (CPU/Mem power). It's an 8-pin connector. 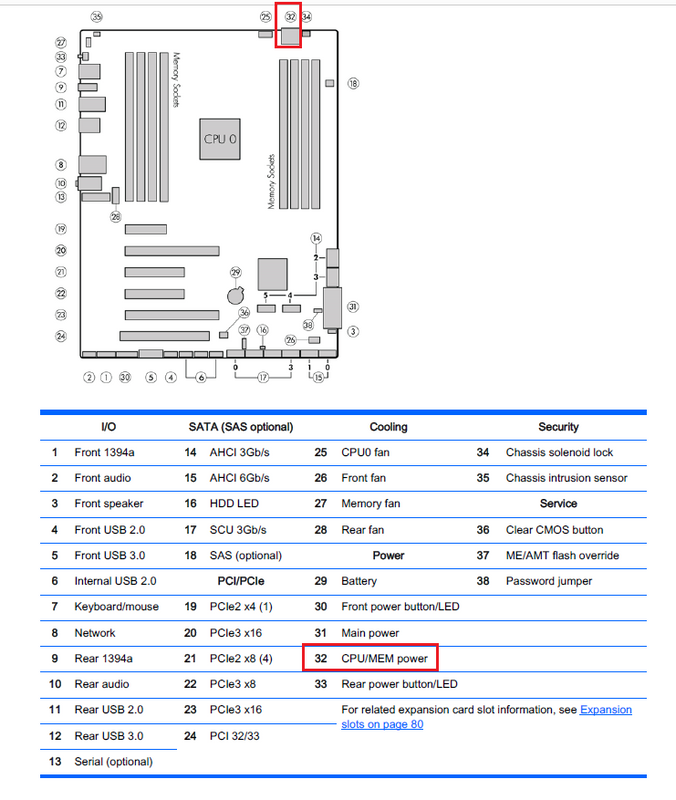 Thanks in advance for your answer !  😉

Sorry, but  I speak/read english not very well ! This is not my native language.

It's not my fault that the French Forum was closed a year ago.  🙂

I am not an electrician or an electronics technician either, but just a end user. So unless I can find a complete set of connectors, I'll leave it at that, and when my Z420 definitively fails, I'll either find the same power supply, or I'll look at the competition for another workstation !

But thank you for answering me anyway ! And sorry for wasting your time.

Good luck with this Forum !!!

i'm sorry but if you don't speak english as your native language, then perhaps mentioning that might be a good idea when you post in english on a english forum as i have no way to know this unless you take the time to tell me.

You would have answered in the same way to an English-speaking user. Not everyone is good at electronics or electricity, or even computers at all.

I feel that on a self-help forum like this, if you respond to a post, it is to help the person. And if you find it tedious or takes up too much of your time, then you go on your way. I honestly hope that the HP Experts  Program has better criteria for selecting its members than counting the number of responses you make.

In my case I don't care about the link you sent me, I can't make the cable myself or have it made. Not to mention the risk of damaging my workstation, even used. Unfortunately, not all people are geeks.

No hard feelings I hope. But I wanted to say it.

Thank you. I wish you all the best in your future endeavors.

HP does have their own engineering standards .  These do sometimes produce proprietary solutions, but given the build quality and reliability, the results appear to justify the special parts.  As time goes on, HP does seem to increased use of standard parts, no doubt due to design, development, testing, and tooling costs.

A preliminary question to ask if the power requirements of the subject will actually exceed the 600W PSU rating. The CPU will be of the period, but modern GPU's often use less power for the same of higher performance than when z420's were new.  Simply making a list of  components will add the total power usage.often calculates a surprisingly lower power usage. For example, this 5-minute system:

> which deliberately uses a lot of the most power demanding parts, is calculated to use a total of 672W.

Quite possibly this has been done already, but consider a careful calculation the power that the subject system will use. It may save a lot of time and effort.

If a larger capacity PSU is necessary, consider looking for special connectors / cables from a PC modifying company. They may possibly make special cables as many pc modifiers want exact length cables, certain coverings, and even colors..  There are many shops that make special cables for modified systems. I imagine there are quite a number in DE especially. Gamers using extreme overclocking are often pushing systems to very high power use. I have never dealt with this company but here is an example:

They appear to make everything.