I have installed a 3 Pin fan in my case, but the problem is it is running at full speeds at all times. Now i know that to control a 3 pin fan you need DC voltage mode, but i cant find any way to do that on hp z400. I have looked in the manual but there is nothing related fan headers on the motherboard.

Is there anything i could do to decrease the noise, it is ABSOLUTELY HORRIBLE.

Are you where you can buy off eBay?  Which of the fans are you trying to replace?  I know the part numbers of most of these fans to help you, or to provide you some alternative HP part numbers.

What HP does generally is buy high quality fast PWM fans, and the motherboard then sends out the proper level of PWM control to drop the speed to what HP engineered as correct.  If you are using a 3-wire fan there is no way for the PWM signals to get back to the motor and thus the fan runs at full high speed, all of the time.

Thanks for the reply,

The problem is the fan i have installed has only a 3 pin connector, and hence i can not find it listed anywhere in the bios or SpeedFan. The only way to slow it down is to manually decrease the DC voltage supply at the fan header itself.

So is there any way to do that.

i have another question,

I have installed the fan over the heatsink ( Green Oval in the image ) , and fan header used to connect fan is ( Red Oval in the image ). So the question is , even if the fan is PWM controlled i.e. have a 4 pin connector. How will the mother board adjust its speed? 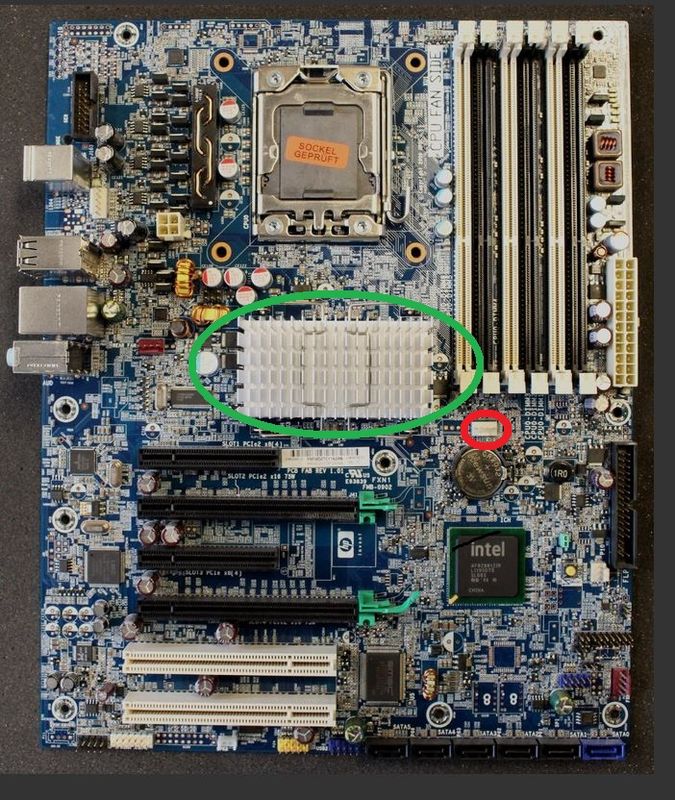 Good question.... it happens I've been working on just that recently.  So, here are the answers:

The motherboard fan header you have circled is the "memory" fan header for the Z400 motherboard.  You can see that header listed in BIOS and see the fan speeds there when a 3-wire or 4-wire fan is attached.  There never was a Z400 memory cooling fan device developed, to my knowledge.  It turns out that you also can set fan speeds via the motherboard's PWM fan speed controller via BIOS.  Most of us just leave that setting at the lowest, but if you turn the baseline speeds up you'll see that other fans do rise in RPMs but not any fan attached to that header.  The big breakthrough is the realization that a non-PWM fan will work via this header just as well as a PWM fan....

HP does have a few chipset PWM coolers using the same 40 x 20 mm size that fits nicely over that heatsink.  I'll post a few pics and some fan part numbers shortly.  HP uses a custom made 40x40x20mm Delta PWM fan.  One is used in the xw6600 and the other I know of is used in the Z600.  I have adapters that let me convert from a 4-wire to a 3-wire attachment..... the same small HP fans run at the same RPMs regardless of whether they're attached via 4 or 3 wires, and they don't rise or fall in the Z400 with changes in the BIOS fan speed setting.

Noctua makes a nice 40x40x20mm fan... I got one of those to experiment with.  It is nice, and comes with one of their quality resistor "Low Noise Adapter", and comes in a 3-wire and a 4-wire version.  Same speeds.  Noctua has a higher value resistor version, the Ultra Low Noise Adapter.  Roughly 50 versus 80 Ohms for those two.  There is a guy selling the NA-RC6 ULNA on eBay, set of 3.  Get a set of those and also a set of the NA-RC7 LNA ones.

Delta makes a series of those little fans, most being 3-wire ones.   Since the motherboard does not alter that fan's speeds via drop of DC voltage or PWM control it does not matter if you use a 3 or 4 wire version.  I bought one of the Delta lowest RPM 12v 3-wire versions and tested with a Noctua LNA, ULNA and combination of the two.  I'll get you numbers.

I use HWMonitor, free version from CPUID.com, for probing fan speeds.... it can't see all, but it helps.  The BIOS access to those is handy as you experiment.  The Noctua resistor adapters (combo of LNA plus ULNA) works great when combined with the special lowest speed Delta 12v van in that series.

However, overall at about 15.00 from Amazon the Noctua 40 x 20 mm fans with a ULNA/LNA combo work great and are easy to find.... that is what I've settled on using.

PDF on the Delta fans.... I'm using the lowest speed one at 12VDC near the top:

Overall those are well worth the 15.00 each.  Add in a NA-RC6 and a NA-RC7 in series to either the Delta or the Noctua.  You'll get the Noctua RPMs down to a little over 3k... the LD version of the Delta I chose seems to drop RPMs a bit more than the Noctua and is running a little under 3k RPMs.

The build quality, bearing quality, and ease of access to the Noctua fans wins out over that Delta, but I wanted to experiment with those too.

Thank you very much, for the long and clearly written answers. Atleast i now know, what the actual problem is.