I noticed that Intel RST gives me an error when I press the tray icon, which has green check and seems to work fine. I just can't access to Intel RST GUI. I noticed this error after Windows 10 upgraded to version 2004.

Does anyone know what to do? I have RAID 1 on that workstation and it is good to check sometimes in what state that RAID is. 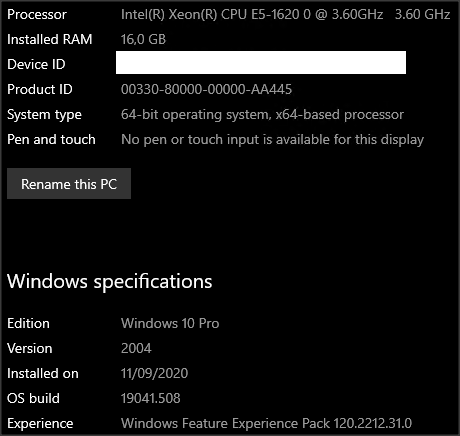 the intel RST package contains two separate programs, the RST driver, and the GUI interface program which can modify the RST driver settings.

if having issues with the program,  first try uninstalling the program via control panel  then rebooting

i can't provide a direct link due to HP forum rules, also note that intel no longer lists earlier RSTe drivers which still support the z420's  c602 chipset and the HP site only has the earlier 4.3 release posted

as i recall the Intel Version 4.6.0.1085 WHQL driver is the last to have support for the C602 chipset, so you might want to also try this package

Thanks. I will check it out and report back here. It may take some days because of my lack of time to solve this now.