I'm having some issues with my CAD software on my HP Z420 and I will probably try and see if it will be any better with newer graphic card. Comparing with other CAD software users, this seems to be the issue.

as for if the card will work, please look at the HP quickspecs for the z420, and note the listed card model(s) and pick the lowest listed one (which is usually the most powerful) and note that cards wattage draw by looking on the nvidia web site and using that number as a max value for a replacement model card

For a low cost high performance nVidia Quadro card we've very much liked the Quadro K2200 in our Z420 workstations, which can be bought used off eBay for about $80.00.  It has twice the memory of the K2000, and tested out quite a bit faster too.  We use the latest drivers off the nVidia site, not what Windows Update wants to install.  If you stay ahead of the MS version then even Windows 10 won't try to force the MS ones on you.

Thanks for answers, but I see I need to be more specific.

I checked this file:

On page 8 there are GPUs for HP Z420 listed. It looks like both of my workstations were upgraded somewhere in the past (I didn't buy them new), because both have Nvidia Quadro K4000 installed, so I need something better. This graphic card is not listed in the file I posted, but it uses less power than Quadro 6000 which is most powerful in specifications.

Problem is that K4000 support was removed for Solidworks CAD that we use. We also have problems with running Solidworks 2019 and comparing with other users that got better results, only GPU was usually different and newer and one still supported from Solidworks side.

So if I understand corectlly, I can install any graphic card that has less or the same power consumption as Quadro 6000 (204 W). Quadro P4000 at 105 W shouldn't be a problem, then. And it is still supported from Solidworks side.

I was thinking about a test with both of my K4000 linked in SLI in one workstation, but then I checked that Solidworks doesn't support SLI technology and it is only used for more displays and not GPU performance boosting.

generally speaking the memory or memory type installed on a video card is controlled by  the video card not the computer,.... as such the type of memory used on a card has no effect on the computer

I run SolidWorks Premium 2017, (and SolidWorks Visualize 2017), and have a Quadro P2000, (and a GTX 1080 Ti), in my personal HP Z620 system. Dassault Systems added support for the Pascal architecture GPU's, e.g. Quadro P series cards, from the 2017 version of SW onwards. Earlier versions of SolidWorks won't run with Pascal cards.

I found ver.41 of the HP Z420 quickspecs and noticed the Quadro K6000 was listed as being supported. This is a 225W card so any card upto this power should be fine (with a 600W PSU though).  If you are creating extremely large assemblies in SW then I would be looking for a Quadro GPU with the most memory, e.g. the 8GB P4000 would be ideal. However, my Quadro P2000 card copes extremely well with the level of 3D modelling that I do. I have also downloaded several very large 3D CAD models and they load and run fine as well.

I also use SW Premium (and Visualize) 2019 at work in a DELL workstation which has 2x Quadro P4000 cards installed. However, SW 2019 only supports 1 GPU card when drawing or modelling,  the 2nd Quadro card only comes into effect when running simulations (compute) or running SW Visualize (GPU rendering).

What CPU and RAM do you have in your Z420? What version of SW are you running?

Hello Brian1965 and thanks for answer, 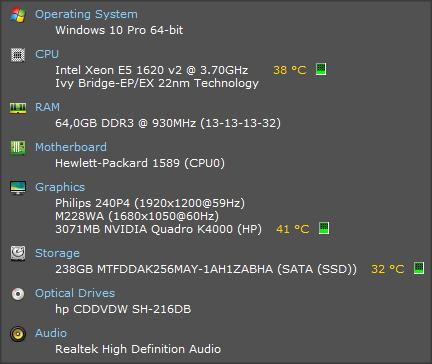 I was running SW 2018 and Windows 7 until this October and it was fine. But then I updated to Windows 10 because of end of support for Windows 7. After that I installed SW 2019 and I got terrible results. I had to reinstall with correct procedure and it was a little better, but still not good. I also noticed that Quadro K4000 cards are no longer supported on SW graphics card driver webpage.

All of this led me to thinking about updating graphics card which is newer and is still supported for use with SW. I'm working with large assemblies and I will try to find a good price on Quadro P4000 and then I will see what happens. As you mentioned, Wattage shouldn't be a problem - I also have 600 W PSU.

I don't know if you already have or use the HP Performance Advisor software? There is a software section which lists SolidWorks and recommends the optimum BIOS settings for your OS and hardware. It will also verify if your current GPU driver version is supported by HP and SolidWorks.

One of the main reasons I'm still running W7 on my home HP Z620 is because in my experience, SW can be a little buggy with W10. My work computers all appear to have various stability and performance related issues. These are high-end Dell workstations, (less than 12 months old), and all of them had clean W10Pro and SW 2019 installations. Some run SW Standard, others are running the Premium and Professional editions. The higher end editions seem more prone issues. These include the occasional 'freezes' (Task Manager), 'lock-ups' (requires computer restart), or very slow file access. I have also seen SW activation errors after a W10 update. Autosave is a life saver! Even the W10 computers that I used at the SolidSolutions training centre were prone to some of these issues. SW is definitely a lot more stable with W7.

You could also try and run a registry cleaner, e.g. CCleaner, to remove any junk or corrupt registry keys, etc. I would also like to think that a clean W10/SW install would be the preferred route as opposed to upgrading the OS.

The comments from Brian1965 are very worthwhile to pay attention to as SW is his main work application.

There's no question of course that the GPU for SW has to be a Quadro; I can't think of any other application of any category that is so strongly linked to a particular GPU technology.

The good news is that the z420 has adequate power supply and connections for most of the current Quadro line-Turing and Pascal series- all but the top tier Quadro RTX .

In summary, if the SW projects are not likely to be large file and a lot of parts, I'd say the P2200 is a really good value as it has a high percentage of the P4000's performance, only less memory and a 192-bit memory interface instead of 256-bit.  The RTX 4000, though is a longer-term, higher performance solution that should handle about anything. besides having the essential viewport support has near RTX 2080 performance (=13496), and can have very high performance in ray-tracing rendering.  I'm not using any viewport programs at the moment, but intend to switch from Sketchup to Rhino, both of which run VRay rendering.  My intention is to wait until RTX 4000's are about $600 used. At that point, I'll consider that  I would have a GPU that would suit me for at least five or six years.

I can't conceive of outgrowing an RTX 4000, but then again I've been wrong in that department a number of times: a few years ago I thought a K4200 would last years longer than it did,..  Something I've learned over the years is that upgrading is very distracting due to the performance analysis and product research. and changing hardware often costs more than buying ahead at a higher level.  The applications always evolve to absorb and exceed hardware improvements.  My solution is to set a cost target and buy one or two levels above used of a recent model that had a very good cost /performance when new, which is why the used RTX 4000 is appealing.

Let us know what you decide to do.

Thanks for heads up for HP Performance Advisor. I didn't know about that. Using this I got some improvements on SW benchmark time, but still not so good as SW 2018. I think SW 2019 should be better.

I know about SW issues with Win 10, that's why I was using Win 7, but it was just the matter of time when I will have to upgrade, since the Microsoft Win 7 support ends soon. And SW 2020 is the last version that will work on Win 7.

My Win 10 install was clean and not an upgrade and I'm regulary using CCleaner.

One last thing that I can do is to try and install different graphics drivers. I curentlly have 411.63 installed, but HP Performance Advisor recommends 431.02. As I mentioned a few times, main problem is that Quadro K4000 is no longer supported on SW graphics cards list and I don't know which driver to install, so that it would still be good for Quadro K4000.

How do others decide which graphics drivers to install for SW, since the support for a lot of cards was canceled this September?