HP Z620 will not start, no POST, no video, fast ticking sound from speaker.

When I press the power button, there is only a quiet, rapid ticking from the speaker, no POST, no beeps, no video, no HDD activity light, all fans are turning slowly, steady blue LED on the motherboard, steady green LED on the power supply. After 60 seconds all the fans run up to full speed, very loud, but there is still no video.
The keyboard LEDS flash once at power-on, but not when NUM LOCK or CAPS LOCK are pressed.
The DVD drive tray opens when the button is pressed.

1. I removed the 2nd CPU riser and powered on, this time NO ticking, but still no POST, no video, after 60 seconds the fans take off.
2. I swapped the video card for a different, known, good card, same result, with and without riser. (The Z620 has no onboard video).
3. I removed all USB devices and used a keyboard and mouse with PS/2 connectors: same result (CAPS LOCK and NUM LOCK LEDs flash at power on, but do not light).
4. I removed two 4TB Seagate drives and left only the original SSD C: drive in place, same result.

What could have happened? How do I troubleshoot this condition?

do a PSU test (BIST) by removing all power supply connections to the board, drives, (and anything else) connect power to supply and power on supply is the green light inside the supply by the exaust fan on? if not supply has failed self test and motherboard needs to be checked by a HP service center or auth HP service

if the bios had failed, the system would power on with blue power light on and fans then ramping up to full speed

Thank you. I removed the power supply from the cabinet, plugged it in and got the green LED and spinning fan.

Can I assume this means all voltages are within limits, etc?

Would measuring voltages at the various pins be meaningful?

i can only repeat what HP has said on the BIST test, that if it passes, the supply is most likely good

try removing  all addin cards, drives and whatnot including video  and remove the riser and remove all ram except for the minimum needed to boot and see if anything changes, if not then the board or posibly the cpu (try swapping them) has most likely failed

rather than buying just a replacement motherboard, i recomend a complete system (minus riser board) as the cost will not be that moch more than for just the board and you will get replacement parts to use or resale

The symptoms described are almost exactly- only except for DVD drawer opening- those that occurred on a z620  after a BIOS update.

Try first clearing CMOS to reset the BIOS to it's previous state.  If that is not successful, there is a BIOS restore procedure that employs setting a crisis jumper, flashing BIOS with a USB drive prepared with the proper *.bin BIOS file.  SDH's instructions are clear:

Here is the jumper location in z620: 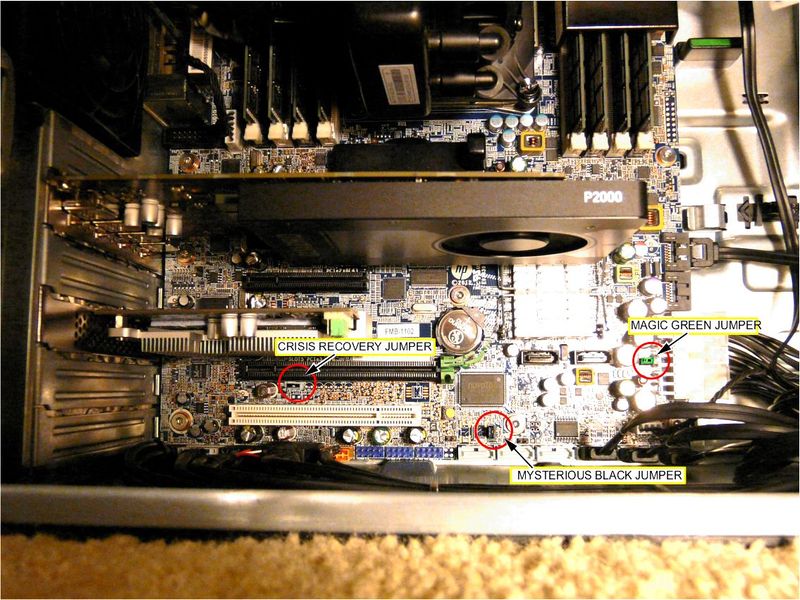 Here is my slightly edited version, based on experience with the SDH procedure:

Please note that my experience with this process was somewhat different than his, but the basics are here, and this did save the Z620 I was asked to salvage. It would not boot into BIOS, and after a delay (with only a black screen showing) all the fans then ramped up to full speed and stayed that way. Now it is back to normal function.

2.  Power off the workstation and unplug the power cord.

3.  Change the jumper position from bridging pins 2-3 (the default condition) to bridging pins 1-2 (the Crisis Recovery position). In the Z420/Z620/Z820 the E15 motherboard header is between the bottom PCI white connector and the next up PCIe black connector. Pin 1 is the far left (towards the workstation's backplane).

4.  Have a non-NTFS formatted USB drive with a  FAT32  formatted partition of less than 1GB having the target BIOS .bin file on it, at the top level of the drive, and plug that in to the TOP FRONT USB 2.0 port of the workstation. You could also use a rear USB2 port. Do not use a USB 3 port. For the current 4/18 BIOS for the Z420/Z620 version 1 and 2 workstations the BIOS is 3.92, and the .bin file you would have on the thumb drive should be named J61_0392.bin. This can be harvested from the BIOS SoftPaq by auto-unpacking it and going into the SWSetup folder that creates on the root level of C drive, and then going into the source SP84163 folder that is created in SWSetup, and go into the DOS folder that is in there, and copy out that .bin file. You can turn off hiding of extensions of known file type in the Folder view tab control panel to make this easier to find (I keep that setting unchecked always).

5.  Plug in power cord, power up, and wait.... you should see it blink the USB stick on, and then 7 red lights/beeps from the workstation. NOW wait.... the workstation will auto-reboot, DON'T TOUCH ANYTHING!

6.  It will restart and you will get blinking USB drive, and red lights flashing (but this time 😎 and then a few seconds later the workstation's lights will go blue and the BIOS will come on. DON’T TOUCH YET!

7.  The workstation will restart again, and the BIOS screen will start, NOW PULL THE USB STICK OUT, and you will see BIOS firmware flash itself.

8.  The workstation will now auto-restart, and flash 9 times and then fully auto-shut itself off.

9.  Unplug the power cord, and don’t forget to set the recovery jumper back to its default position (bridging pins 2-3). That is, shift it back to the far right on the pins, where you found it before starting the process.

10.  Plug back in the power cord, power up, and restore any settings you had in the BIOS, and BIOS should be back to working properly.

Again, the number of beeps likely varies with the particular problem(s) that this advanced firmware mechanism encounters, as it did in my case. This is a last ditch effort procedure so I had no hesitation to keep experimenting until I succeeded.

If the procedure is not successful, try again and pay special attention to the timing of withdrawing the USB drive.

- and worked for me on the first try.  I would add to those instructions that, after reading a number of posts on the subject, it seems that the prepared USB drive should have the BIOS file in a small partition, some suggested no more than 512MB.  I used 1GB and it worked, but there is possibly the limit on the size of partition the BIOS can address- it's possibly 1GB

I don't see how following this procedure could do any further harm.

Let us know what happens.

Thanks, BBZ, valuable information. Is it possible that the BIOS was updated unattended in the background? I have not done anything with the BIOS since purchasing the machine. I would not expect an automatic BIOS update.

DGroves, that will be my next step, thanks.

HP Recommended
I removed the riser, which carries four 8GB DIMMs and tried booting again. With eight 4GB DIMMS on the motherboard, the rapid ticks from the speaker did not occur, but it still has steady blue LED, steady green LED on the power supply, fans run slowly, no video, no POST, no beeps. After 60 seconds the fans run full speed.
Following the HP Z620 Workstation Maintenance and Service Guide c04205252 recommended memory configuration, I removed the eight 4GB DIMMs one at a time and tried to reboot after each removal. The sequence of removal of the DIMMs from the numbered slots was 2-6-4-8 7-3-5-1 (I removed #8, then #7, then #6, etc).

Even with no memory installed, the BIOS POST is not executed.

I next removed the video card and disconnected the DVD drive and removed my two data disks, 4TB Seagate Barracudas. Same result.
I next tried each of the 8GB DIMMs from the riser, one at a time in slot #1. Same result.
At each power on, the LEDs on the PS/2 keyboard flash once together, but neither the NUM LOCK nor the CAPS LOCK LED will light when pressed.
A 16GB USB thumb drive inserted in the front panel USB 2.0 slot lights with power on and stays lit.
Was this reply helpful? Yes No

as previously suguested, try a bios recovery by following the steps that "SDH" has posted using the system configuration where the system gives blue light, then ramps fan speed up to full speeds after a short while. as this is the symption of a corupted BIOS

You've been patient and methodical, but the symptoms of the system's inability to start, and after the exhaustive experiments, does seem more clearly a corrupted BIOS.

It's unclear what may have caused it; usually it happens when updating- which requires an active effort. I've never heard of a spontaneous fault in, for example, the CMOS power- a failed battery would only reset to the default state, but I suppose it's possible.

If clearing CMOS and then trying removing the CMOS battery for four hours or so does not reset the BIOS, consider trying the crisis jumper set > reflash of the BIOS technique.  Also consider replacing the CMOS battery as a matter of course. There are one or two subtelties, and for example, I did this with only one memory module, a generic display adapter and I think with no drives attached. Several attempts may be necessary, but in my exmple was fortunate in that itworked on the first try. That saved buying a new motherboard.