Hi, everyone. I buy on ebay mainboad HP Z420. When boot it pause and require F1. Can anyone guide me turnoff F1 and it continues boot enter Windows.  I disable posmessage and disable bypass f1 prompt in Bios. 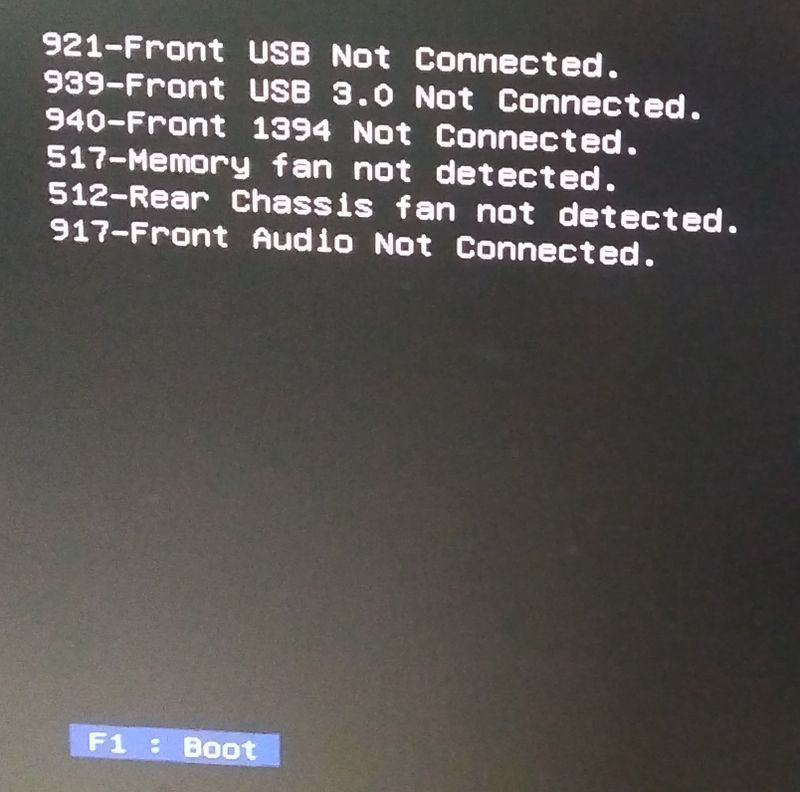 Second question.  What's max current load of socket cpu fan. I don't have hp cpu fan and i use a Delta 12v 0.6 A for it. Is it safe for socket cpu fan ?

Have you replaced the faulty z420 motherboard from your existing z420 chassis and connected all the components that were previously connected to your old motherboard back to your replacement motherboard?

Note that the featurebyte is used to control what is installed from the recovery disks. From a recent post, as  i understand, the featurebyte may also be used to define what hardware is expected to be connected to a motherboard and thus can impact on what errors the BIOS will see.  Look at this post for some background.

Now it could be that this featurebyte issue may not be relevant to F1 errors on your z420, since i always thought z420 had front usb2, usb3 & 1394, as well as front audio, memory fans and rear chassis fan. But as i don't have a z420 i'm not sure.  Still, it's worth checking the correct featurbyte is entered if possible (i.e. it was blank).

However, if you're building a home workstation and starting with an empty case and a z420 mobo, i'd suggest reading all HP docs available for the z420, especially the maintenance and service manual which you can find here.

With VRM cooling, i don't know but maybe they are cooled via the shroud and fan that covers the RAM so look at the maintenance and service manual for hints...

Oh, if you are building your own frankenstein z420, keep in mind that the HP power supply is not a standard COTS ATX power supply as HP uses proprietary connectors to the mobo...

PS: providing a little more info about what you are doing or hoping to achieve within your original post could help others be more targetted in their answers and you may get a quicker response as a result.

Hi, everyone. I buy on ebay mainboad HP Z420. When boot it pause and require F1. Can anyone guide me turnoff F1 and it continues boot enter Windows.  I disable posmessage and disable bypass f1 prompt in Bios.

Second question.  What's max current load of socket cpu fan. I don't have hp cpu fan and i use a Delta 12v 0.6 A for it. Is it safe for socket cpu fan ?

The stock bios does not have the option to turn off the F1 errors. It is possible that the option is there but not displayed to the end user - in that case it may be possible to extract the IFR representation forms from the bios, and if such an option is found change the corresponding NVRAM varaible with e.g. GRUB. More info on this is readily available on various bios modding forums.

The other option to eliminate some of these errors is to wire the 'sense' pins on some of the connectors to 'fool' the machine into thinking that the appropriate connectors are connected - there have been some info posted on this on this forum in the past. This is likely to help with the USB 2.0 / 3.0 / audio not connected messages, but for instance in the case of the fans it may result in a new message - 'fan not working' or something to that extent

In my view the HP Z420 board is not the ideal base for a custom system, due to the above and other propriatary solutions. But since you already have proceeded in moving the board to a new case, I would also suggest moving all the wires / connectors  from the original case to the new one and then see what parts / connectors can be integrated with the new case. In the case of fans, you could always extend the cables and use them in other places in the case to cool various componenets.

I have 3 z420 motherboard, and with vga and a keyboard only, one boots with lots of errors of not connected fans and connectors, and not asking for F1, and two of them boot up only with F1 to boot, regardless to the setting of "enable bypassing F1 to boot on system startup" (or similar) setting in bios.

Also checked featurebyte, and it was empty, but filled in, and it still wait for F1 to boot.

Maybe this is some HW error?

I have made an adapter for the motherboards, so it works fine with a standard ATX PSU.