Question about Memory and/or Bios and/or ???

First tried clearing the CMOS with the button.  Then removed the memory I had just purchased, installing one stick at a time - thinking that perhaps of locating the 'bad' one(s).

And nothing.  I put in the non-error correcting sticks that the computer came with and everything booted up just fine.  And got lunch.

That's when I recalled my old days of building computers ( I like many today have gotten 'lazy' and just get laptops ) - but I recall the need to update the bios and started to read more about that process.

So my questions are - do I 'need' to update the bios?  If I do, in order to see the memory I'd like to install - is there any gotchas that I need to be aware of?

Or is there something else I'm missing? ( This CPU doesn't works with the intended memory for example - something I'm not aware of...)

PS - You might have seen that the memory installed is not in the "proper" order, i.e.: 1->2.  This is how the unit came to me.  When I've been installing the new memory however, I have followed the proper ordering ( and actually tried random DIMMs as well. All to no success. ) 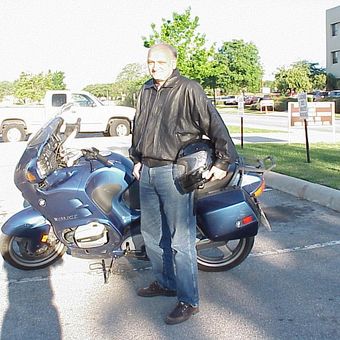 According to Kingston memory finder, maximum memory is 64gb using 8 of the  8gb ECC

That is also documented in the configuration guide

Do no upgrade bios if there is any chance of bad memory or flaky system.

I had several Z400 and had to mix and match memory using memtest86 to see which sticks were different enough to cause problems when mixed.

That kingston finder shows that 2Rx8 and 1Rx8 are allowed.  I would not mix single rank with dual rank.  Stick with one or the other.

I am a volunteer and I do not work for, nor represent, HP
If you think this reply was helpful, please mark it as so or as a solution.. Thank You!
Was this reply helpful? Yes No

Only I have a friend with a similar setup. The only difference is their Bios is slightly newer and they have a slighter better CPU.

Also, I guess my pic of my bios setting was removed.  I've removed my S/N - hoping that this might be of use to some. 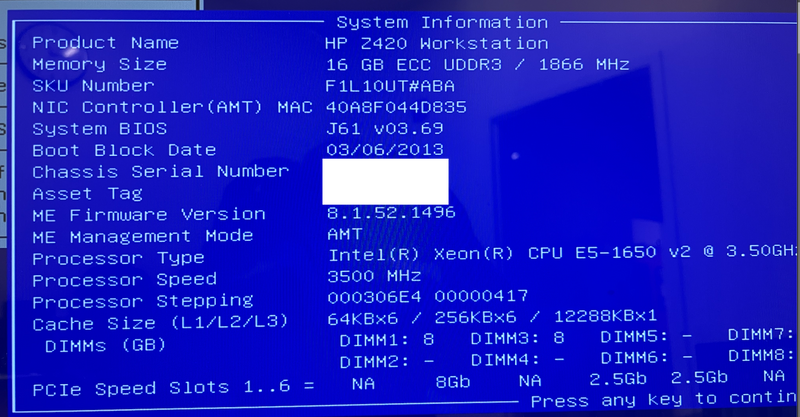 the z420 had two motherboard revisions, with the later v2 boards preferred due to them being able to run faster undocumented cpu's and faster ram

(the v1 boards only have 4 dimm slots as i recall)

the link below may be helpful to you:

EDIT: DGroves posted while I was typing this... his link at the bottom gives my old links that I just tested and they don't seem to work anymore. I'll go dig them out and attach the ones related to the ZX20 v2 workstations.

That HP link you provided is old news, from 2012 it is related to the version 1 of the Z420. With the release of the Z420 v2 that workstation could support faster memory, 1866 MHz. Thus the statement in there "Speed • 1600 MHz, 1333 MHz and 1066 MHz DIMMs are supported • Memory will operate at the speed of the slowest rated installed processor or DIMM" is incorrect.

And, if you don't use one of the v2 processors approved for the v2 motherboard you won't get the max speed even if you have 1866 memory.

We in our enterprise have been using the v2 motherboards in our Z420 and Z620 workstations for years now, and the fact is that we use the exact same memory in our Z420 v2 workstations as our Z620 v2 workstations. All 1866 ECC buffered. I mainly install 8GB sticks because it is so reasonable in price from retired servers. I have tested 16GB ECC buffered sticks in both the Z420 v2 and Z620 v2. Those work fine too, but too expensive for our needs... 8 x 8 = 64GB is enough for the programs we run.

Some of the confusion revolves around "supported". Just because a memory type is not "supported" by HP may simply mean they did not do the extensive testing required to prove it would work.

To the OP:  The original poster shows his boot block date the presence of the v2 processor... that means he should be good to go. Please learn how to upgrade BIOS from within BIOS. I've posted here a number of times about that. It is safest, and it also is better to use the most recent BIOS.

I'll add in the newer PDFs showing the 1866MHz faster memory in official documents from HP. I sure wish they would have an archive that they did not keep screwing up. That should happen within the hour...

Was typing when I saw your posting. Thanks so much. I actually was reading your posts and hence my thought to go 'all' the way.

As for the bios updating - you think that this is my issue then?  ( If so, could you point me to the most up to date / relevant post  you think I need to read.  Just want to cut to the chase and all. ) Thanks.

Ok, so I updated the BIOS;however, still getting 5 beeps when I install the new memory.  I have 8 sticks in total - I can't believe that all are bum.  Made sure that they are seated nicely.

Any other ideas I ought to try? 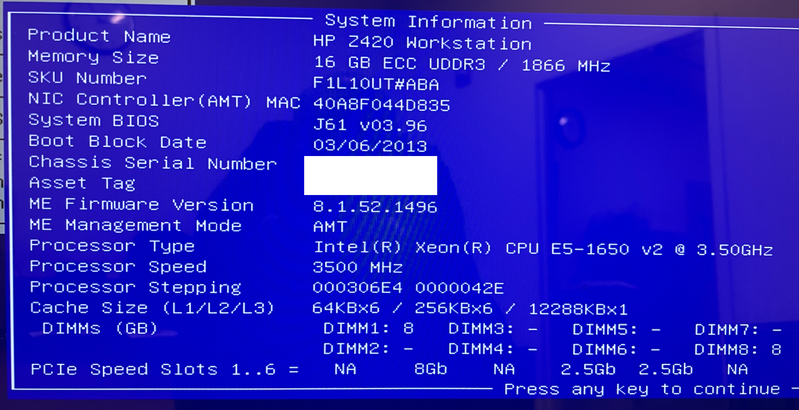 DGroves: For the Z400 v1 there were only 4 memory sockets and for the v2 they got 6 sockets. It was an early way to figure out how to get the later better version. For the ZX20 v1 vs v2 I believe it was the same issue for all... needed a different chip. Early on HP thought they could engineer around the need for another motherboard version and thought they could get the v1 and v2 processors to run on the same original motherboards.  This is based on an interview with the HP director of workstation development on the day of the ZX20 v1 launch. We're lucky with the ZX40 family... all those can run both the v3 and the v4 processors.

To OP: I've attached some of the PDFs which apply to the 1866 MHz ECC buffered memory HP used in the Z620/Z820 that works perfectly also in both the v1 and the v2 motherboards of the Z420. One gof the PDFs provides HP part numbers, but I found that the same memory HP used was also used in other same-era servers from IBM/Lenovo/Dell. Hence, as the servers were retired the memory glutted the market and scroungers like me could recycle it. Servers tend to get retired significantly earlier than workstations that can use the same memory. I know HP writes about using ECC unbuffered in the Z420 and ECC buffered in the Z620/Z820 but we've self-validated that the same ECC buffered memory works great in all 3 of those ZX20 upper level workstations. I think HP never did the validation testing because the Z420 was kind of the red-haired stepchild when compared to the fancier Z620 and the Z820 ones. Plus, memory was way more expensive then and the idea was that if you could only afford the Z420 you also could not afford the bigger more capable memory sticks. Things have changed...

My advice is to get four of the 8gb sticks I describe below and pull all the other memory and just load into the 4 dark color sockets you have. If you like that you can add 4 more later into the white sockets.

I did test with corresponding 16GB ECC buffered (= "registered) server sticks in the Z420/Z620 v1/v2 and it worked fine. The amazing thing that when I did test with both those same 8GB or 16GB sticks in a Z600 v2 that also worked fine. The memory speed was downregulated to the fastest those older workstations could run (1333 MHZ) given that they had the highest speed (1333 MHz) processors also. Here is a copy/paste from the past:

"One of my HP forum friends, the guy who has mastered PassMark, got me a tip... There is a specific type of server memory 8GB sticks, ECC, buffered, rated for 1866MHz (14900R) speed that can be bought used off eBay. The version 2 ZX20 motherboards running the fastest HP-certified v2 processor(s) cannot run faster than this speed and work well with that recycled memory.

This HP/ IBM/ Lenovo/ Dell ECC buffered server memory works just fine in the Z620 v2 and also in the Z420 v2, and I have even tested it also in the HP Z600 v2 where it also works fine (but downregulated to 1333MHz max speed to match the fastest processors for that workstation).  NOTE:  It does not work in the Z400 v2 running the fastest HP certified processor for the Z400 v2.  It will auto-downregulate its speed if a slower processor is present. Also, I discovered that same version of 4GB sticks are actually the same price or greater on eBay than the 8GB sticks (unless one has incredible hunting skills and great memory-buying karma).  This is because there were many more 8GB sticks sold for now-retired servers. I bought mainly the Samsung version for our projects.

The Samsung version has this code:     M393B1G70QH0-CMAQ8M but I also have seen M393B1G70QH0-CMA. I simply search eBay for the second one and the results usually also include the first code sticks.  The alphanumeric after –CMA are not of value for finding these sticks.

There are equivalent alternative sticks to the Samsungs you could buy, but if you choose to do so it is ideal to at least get all from a single OEM... all Samsung, or all Micron, or all SKHynix, and surely all of the same rank (single rank is preferred), all ECC (required), and all buffered (strongly preferred over unbuffered):

I have bought these 8GB sticks for as low as 10.00 each including shipping. This was from a rare find of untested sticks sold “as is” from a highly rated seller.  My friend paid about 14.00 for each stick, but they were tested. In all my memory buying over the years server grade memory from Samsung just does not seem to fail. So, my cost with tax and shipping was under 100.00 to load up on 64GB.

There is a specific synergistic benefit to having all slots filled with identical memory, so for any of our workstations with 8 x 4GB sticks I'm happy with that. I’m also sure a 4 x 8GB sticks build would be just fine for our Z420 v2 workstations. 8 x 8GB has been tested with no perceptible benefit for our particular type of real-world work.

Attached below are ZX20 version HP memory white papers, plus a DDR3 PDF for the v2 sticks. As stated above, ignore the Z420 unbuffered statement... from years of experience.