Where can I buy an optional SD 4 card reader for my new HP EliteDesk G3 800?

I didn´t find a shop in the internet.

Can I buy it in a HP shop? In addition I would like to receive the article no.  for the card reader from HP for a more detailled search in special shops.

I also would prefer to buy it from HP directly as I don´t want to loose the garantee.

In the specifications for the HP EliteDesk 800 G3, there is no included SD slot.

SD slots are relatively common in laptop and ultrabook products, but not in desktop PCs without the addition of a third party adapter.

You can purchase an SD card reader that connects to your PC by USB. Using it won't cause you to lose the PC's guarantee.

See the results of the Google search I did.

Thank you for your quick response.

Where can I buy this attachment in HP store?

It isn't sold by HP specifically for your Enterprise Desktop PC.

The HP store for your PC.

Check out the available accessories.

For me it´s unsatisfying to read that for a brand-new PC from HP the claimed slot for a SD card reader cannot be used due missing availability of the component at the HP store as it will not  be sold by the origin company.

This is like having bought my computer in a second hand store.

A lot of space for improvements in the future.

In the specifications for the HP EliteDesk 800 G3, there is no included SD slot.

SD slots are relatively common in laptop and ultrabook products, but not in desktop PCs without the addition of a third party adapter.

I have the same unit and the same question. There are references in the quickspecs and datasheeets that the SD 4 media card reader is an option but I can't find it either.  I found something similar on eBay and Amazon that could be the right part.  http://amzn.to/2kgD3IW and https://www.ebay.com/itm/HP-Secured-Digital-SD-4-Slot-Media-Card-Reader-759030-001-/391254844654.

I've had success calling HP Support and asking for these obscure parts. My experience is that if I called them now about this they wouldn't find it either but in a week I'd get a call back or an email with the HP part number. Then I can find it in the HP store on a thrid party web site.

Post the part number if you find it before I do.

I called about another matter and the nice person looked it up.

Edit: My bad. I should have checked that you entered your PC's P/N down there. So it's the Tower PC variant, then. Well, as I said, you could fit the "15-in-1" card reader, but I forgot to mention you'd have to choose between that or your DVD drive.

Even though your EliteDesk 800 G3 Tower PC has a tower chassis, the 5.25" bay is vertically mounted, so there's room for only one of those. G2 towers had either a 3.5" bay alongside the 5.25" one or a blank spot for the SD 4 Card Reader depending on the model.

I'll leave the original reply "as is" for reference, though. Thanks.

Sorry if I couldn't tell from your message whether you bought the Tower PC, Small Form Factor (SFF) PC or the Mini PC.

The first generation of the EliteDesk line of business PCs, as well as some of the workstations from the Z line, used to have the "15-in-1 Media Card Reader" (P/N F4N90AA) listed as an option part.

This part fits either into a 5.25" or a 3.5" drive bay. Since all SFF models, starting with G2, don't feature the 3.5" drive bay anymore, this would currently fit into the G3 Tower PC only. The only option would be the "SD 4 Card Reader" you mentioned for SFF PCs. 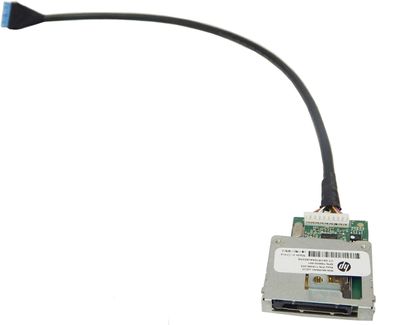 This is plugged to a blue USB3 connector on the motherboard (or a black one depending on the board's model, but doing so would dowshift the card reader to USB 2.0 speeds).

In any case, I'd advise having a technician assist you in determining whether your PC's motherboard does indeed feature any of these connectors and if the chassis would require any additional bezels, screws etc.

Finally, if it's the Mini PC, then yeah, you won't be able to fit anything into it, it's too small to accomodate any additional parts.

Final parts to the puzzle.  Please note that not all optional parts you could order from HP when you ordered your computer are available as spare parts, but I agree that this one would be reasonable to have available.  Your solution is coming together:

1.  OP has EliteDesk 800 g3 tower version... he mentions that and gives its part number.

2.  The general trend for many of these HP computers is that the motherboard in the SFF and the tower versions are identical or nearly so.  Makes sense.... cross compatibility of parts.

3.  The tower's technical and service guide has lots of info worth having... see page 73 for MB headers, and my screenshot image below (you can see these when a moderator releases them):
http://h10032.www1.hp.com/ctg/Manual/c05382325

4.  Here is that screenshot from the manual showing the SD reader's motherboard attachment.  Note that above it are two USB3 motherboard headers.... both for out front.... one blue and one black.  Those are not used for the SD card reader: 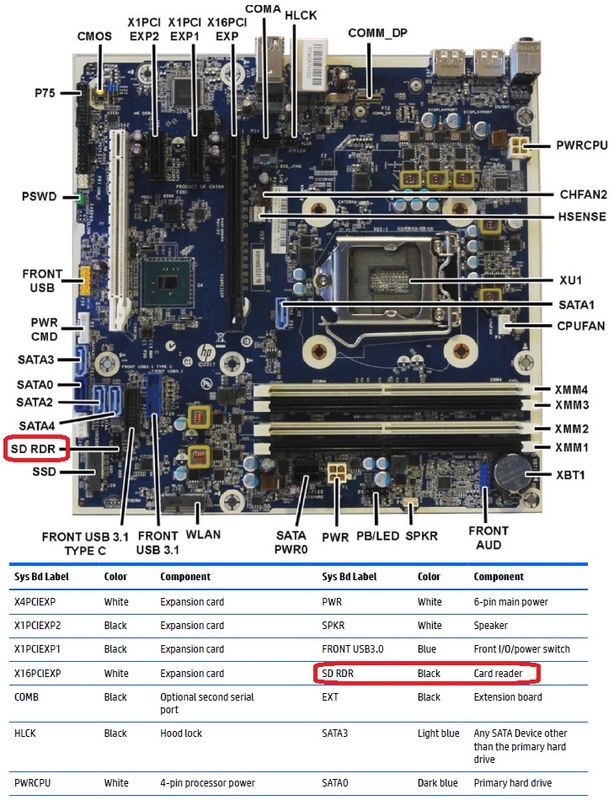 5.  From an eBay better resolution G3 motherboard image, zoomed in on that header.  It is a USB2 header, and note the SD RDR printed on the motherboard below it.  You'll be attaching your part via a USB3 to USB2 adapter, and generally the USB2 end will have a plug populated with 2 sets of wires (but the adapter from HP shown in one of the pictures below appears to be populated with only1 set of wires): 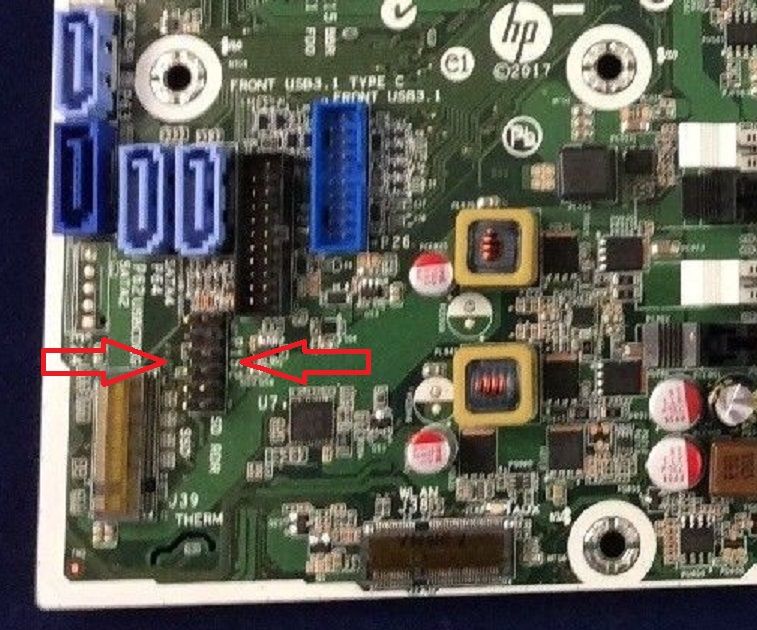 6.  These card readers are generally USB2, all the way up to your current box as you can see above.  If you found the same form factor from an earlier HP box then it almost certainly fit and work fine.  For example, from an earlier related discussion for SD 3 card in HP ProDesk 400 G4 Desktop.... you could use this but you want the SD 4 official version I believe.  HERE is the discussion for the older one that I believe also would work, and you just unscrew the plastic plug and screw on the SD card through the metal tab you'll see, with the hole in it shown lower:

7.  So, how might a USB3 plug end SD 4 card reader fit in your box given that its motherboard has a USB2 header for it to attach to?  A USB 3 to USB2 adapter.... these are not rocket science adapters, but here is a HP kit with  that HP adaper (Assembly Part Number 717387-001).  These from HP would be best quality if you can find a kit that includes that.  Note the shorter USB3 cord on the SD 4 unit here, with the bent up metal tab with hole for screw mounting: 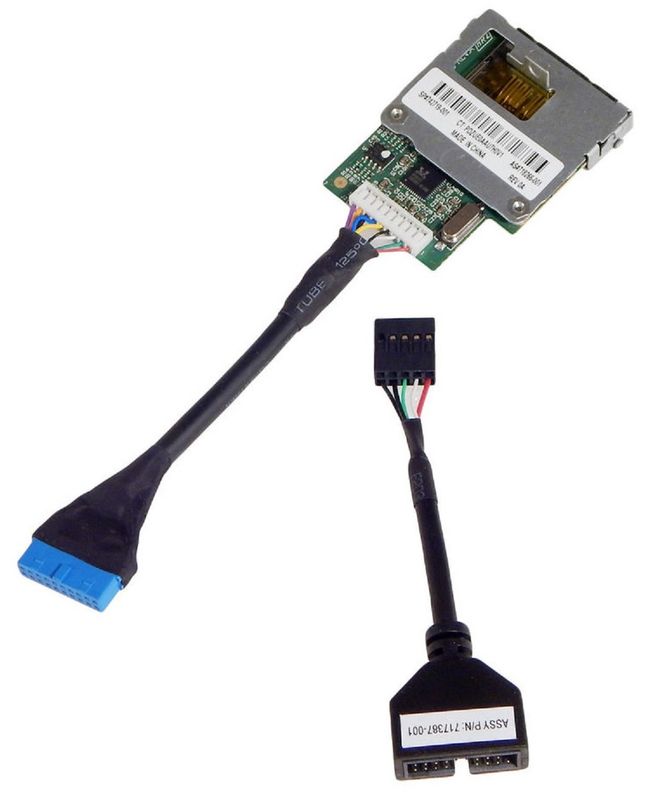 8.  Once the part is screwed on and the USB3 to USB2 adapter is put in place the card reader will be plug and play.  Note that the same HP parts may be used on different computers and have different part numbers but can be identical otherwise.  There is nothing too complicated about this.... it likely could be used at USB3 speeds if you had a spare USB 3 header on your motherboard.

9.  Here's a couple of options, and you probably will need the longer version and to buy a generic USB3 to USB2 adapter:

Or, you probably could go with the older SD 3 version from that older post linked above. 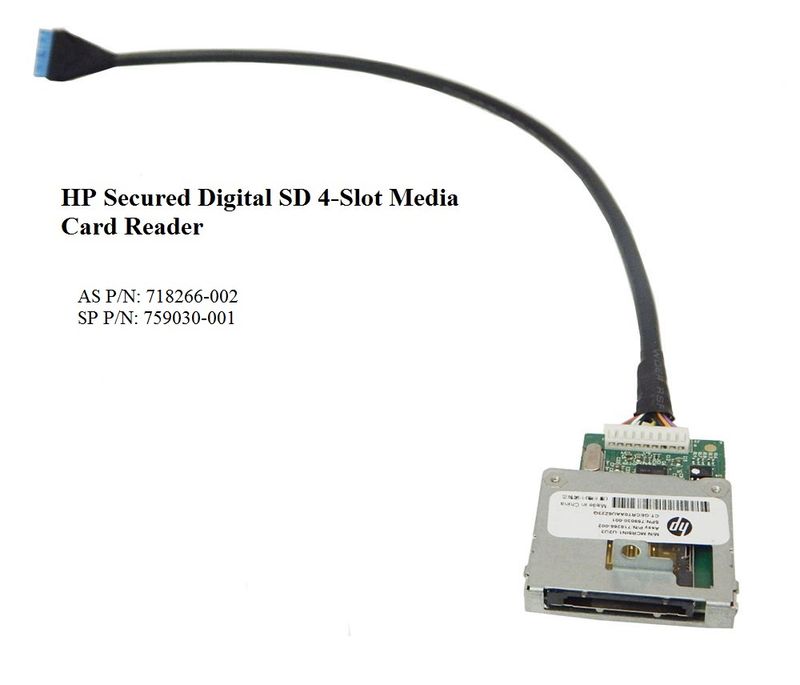