Slow performance can be down to many possible reasons. It would be helpful if you could download the free version of Passmark Performance Test and run the full test with the default settings. This will give a score for CPU, 2D/3D graphics, memory and disk. Use the Windows snipping tool to grab an image of your test results and post back. e.g. 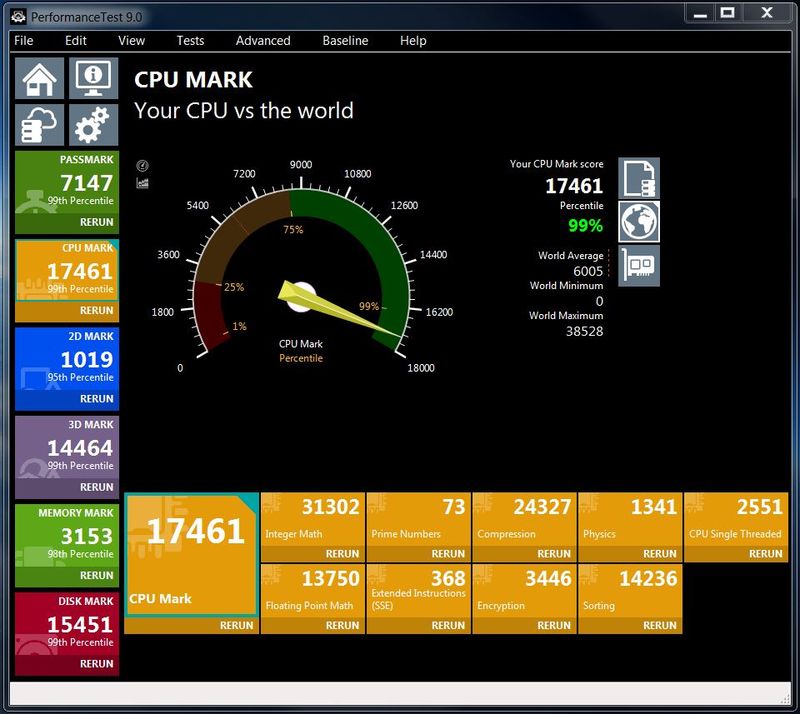 Please make sure you have the latest BIOS and Windows 10 updates installed. 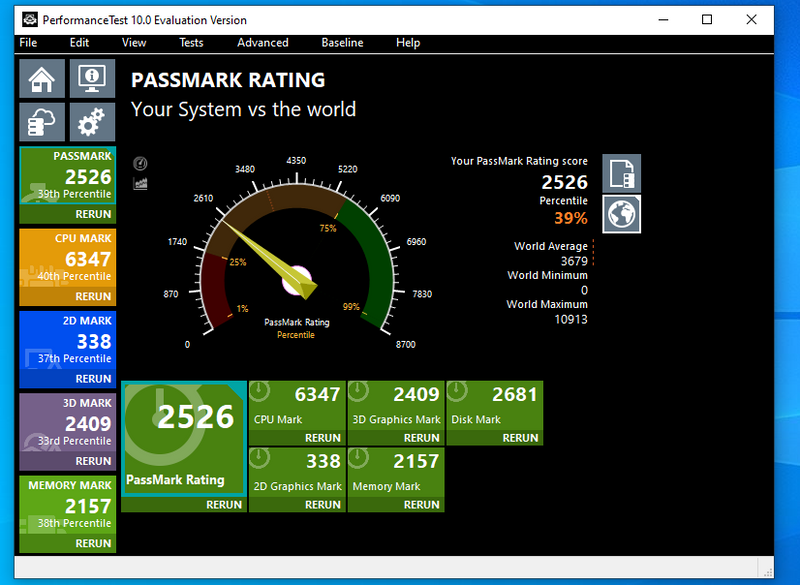 Based on your current computer specifications and your intended usage, it definitely looks like you could do with some system upgrades. For on-screen rendering of complex 3D models, you need lots of video RAM and a high CPU single threaded performance. i.e. your CAD software, (and ArcGIS software), will only use 1 or 2 CPU cores maximum when editing or rotating the CAD/3D data. The only time your system will use all the available CPU cores is when you are generating final renders, i.e. with lighting, reflections, etc. However, if your software supports the feature, you could render using the GPU, (i..e CUDA cores),  Some CAD software packages require a third party plug-in, e.g. vRay, Bunkspeed, etc. , to GPU render.

CPU - Looking at the table below of HP Z620 comptatible v2 CPU's, along with their respective Passmark v9 scores, (CPU and single threaded scores), you will see your current E5-2620 v2 CPU, (highlighted in yellow), is not that particulary great at either; 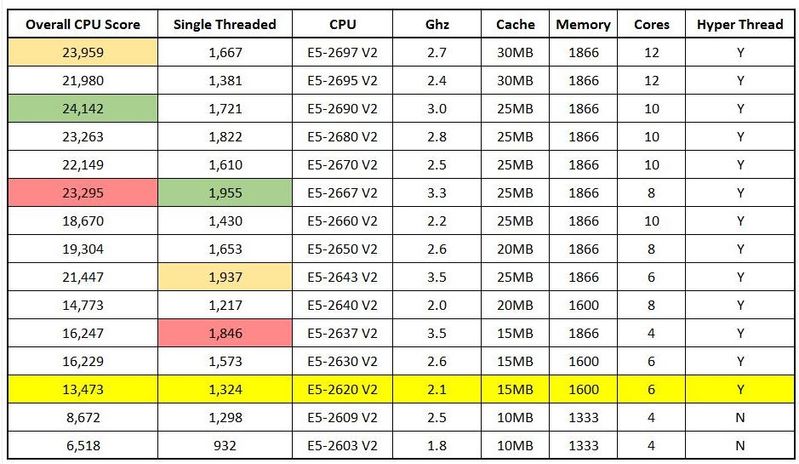 The ideal CPU would be the E5-2667 v2 CPU. Have a look at used CPU's on ebay and see what best fits your budget.

Memory - Your current CPU only supports 1600Mhz memory, whereas most of the other compatible v2 CPU's support 1866MHz memory.  Also you state you have 48GB of RAM installed. What configuration of RAM modules are you using? I assume you are using different sizes of memory modules, e.g. 4GB + 8GB RAM modules? Unless your dealing with very large models, then your current RAM amount should be fine. Just make sure the RAM configuration matches the Z620 guidance, (as detailed in the HP Z620 documentation).

GPU - Your current 2GB K620 card will struggle with even medium sized 3D models and is probably switching information between the limited available GPU RAM and your system RAM. Yes, the Quadro cards will use system RAM when it runs out of GPU RAM. The K620 card is fine for 1080P photo editing with 10-bit colour but not really suited for 3D work. Ideally, you want a minimum of 4GB GPU RAM for 1080P work, (or more if possible). If you're on a tight budget, consider a Quadro K4200. If your software doesn't specifically require a Quadro card to run, (e.g. SolidWorks 2017 does require a Quadro card), then consider installing a GTX card instead. Generally, GTX cards have better 2D/3D performance when compared to a similarly priced Quadro card.  i.e. you get more bang for your buck.

Disk - If you haven't done so already, switch your OS to an SSD drive to speed up loading times and system responsiveness. SSD drives are about 4 times faster than mechanical drives (HDD's).

Brian1965 as usual has very good comments and suggestions.

CPU: Given the primary applications, in my view,  there is a kind of mixed set of performance priorites: ArcGIS is highly multithreaded, whereas Autodesk Civile is bothe single-thread and well threaded, and Photoshop is single-thread dominate but has limited mutithreading; Photoshop does not span over duall processors and really the perofrmance can go into the negative if it addresses moret ahn eight cores.- five or six is optimal.  It's improved recently, but not entirely well-threaded.  See the Puget Systems' articles on Photoshop.The Xeon E5-2667 v2 is a very good processor, with a Passamrk average CPU rating of 21385, but in my view when there is 3D CAD, which is real-time application, a higher single thread performance is preferable.  I would like to have a Passmark single thread score of 2500+ but near 2400 is acceptable.  With long calculations streams, the preference is that if the system sits working on it's own several minutes longer on a rendering, it's far less fustrating than watcing the monitor, waiting on CAD model regens.

In this view, an 8-core processor with the highest possible single-thread perofrmance would be the best choice for an E5 v2 system.  For that use , consider the CPU that I and Brian1965 use,  the Xeon E5-1680 v2.  These have become quite reasonbly priced lately. The E5-1680 v2 is in a special category in that they are rare Xeon that can be easily overclocked by using the Intel Exteme Tuning Utility ("XTU").   The office z620 runs an E5-1680 v2 @ 4.3 GHz on all cores by virtue of a z420 AIO liquid cooler, which plug into a z620 with no modification. In z620_2 @ 4.3GHz, the Passmark single-thread mark is 2384. Brian1965 has something in the 2550+ region at 4.7Ghz, but that has a custom external liquid cooler to acheive that clock speed.. The z420 cooler does mean that the z620 can not add the second processor riser board without reverting to the stock air cooler. For your use, given the very long runs that ArcGIS can create, consider all cores at 4.2GHz to avoid thermal throttling.

RAM: Consider 8X 8GB of DDR3-1866 ECC registered RAM identical modules with the HP part label on it.   All the applications mentioned will benfit from it.

GPU: The K620 is  a good value GPU, but epsecialy for use with ArcGis and Civi, an 8GB Quadro with a lot more CUDa cores is recommended and a Maxwell series or newer- M4000 or P4000.

Drives: Consider an  M.2 drive on a PCIe adapter card for the OS/Programs (and carefully update the BIOS to the most recent). A conventional 2.5" SATA SSD is also quite usable, then, a 2.5" SSD for active projects and, finally a good sized mech'l drive for archived projects, and with a partition for maintaining a quick system recovery image, or the recviery image can be on a USB drive.  If there is a catastrophic failure or virus on the OS /Programs drive, place the mech'l drive  in a USB enclosure- or use the prepared USB drive, and the whole system can be restored quite quickly.  I always also maintain an external backup drive (currently a 6TB) that is only run foro backup and system recoevery.  This isolates it from possible attacks and the drive lasts forever.  I have a 160GB external drive from probably 2008 still perfectly usable albeit very slow.

For professional use - or student use-with that level of CPU, memory, and GPU -intensive applications, the system needs to be brought close to top possible performance.