I have the HPZ 800 specs below. My issue is I have bought a ORICO 5-Port USB 3.0 PCI Express PCI-E Card Expansion Adapter 19 PIN Connector and when I connect it to the system the PC will not boot up,

I cannot work out why,

I have tried all pci slots from top to bottom and no joy.

What is the best bios settings also?

Any help would be gratefully appreciated

DO NOT CONNECT ANY USB DEVICES

just plugin the usb card and power on, does the system start? if so connect the AUX power connector to the card

the card has a MOLEX connector, and comes with a molex to sata adapter

NOTE THE MOLEX CONNECTOR IS KEYED!!! you must insert it the correct way if you connect it backwards, the system will not start and the card will be damaged the  card comes with a molex to sata adapter if your system does not have a free molex power connector and the same thing applies, the connector is keyed so it fits only one way

Here is an alternative:

There is a specific HP USB3 PCIe card I've been using for years in the xw6400/xw6600 and all versions of the Z600/Z400/Z800 without issue, and a detailed HowTo document on that is  HERE .  The reason HP called that their USB3 "2x2" card is that there are two ports on the backplane and it also has a standard "20-pin" USB3 header built into the card for adding two more up front (or elsewhere).... 4 total, with all 4 carrying the full wattage capability of the USB3 standards.  You'll see how I brought the added 2 front ports into reality in that post.

This card has HP quality, and also easy access to the HP driver installer.  The card uses the same one available from the Z420/Z620/Z820 drivers download pages from HP.  That works because the card is based on the same chipset HP used in all of their ZX20 workstations to integrate USB3 onto the motherboard itself.  HP engineered these cards to bring USB3 to the prior ZX00 generation, and it also works well on the xw generation of workstations.  Of interest the xw6600/xw8600 have two PCIe generation 2 slots (both of the PCIe x16 "video slots"). but the xw6400/xw8400 have 0, so in those the card will only work at 1/2  USB3 speed.

One tip is that the card needs to be powered before you load the drivers..... parts of the card will not be seen by the installer unless it has power and this would result in an incomplete install.  All the workstations I put these in and then upgraded from W7Pro64 to W10Pro64 resulted in W10 drivers that kept the card running fine after the W10 conversion.  That makes sense because the same chipset was used on so many ZX20 workstations that HP and Microsoft would have ensured that the W10 upgrade process automatically worked fine for that chipset.

Do your research to make sure you have the card plugged into a PCIe generation 2 slot so you have all the bandwidth you need (that info is in the technical and service manual).  These cards are still available for about 20.00 USD on eBay, and search for both part numbers (two part numbers for the same device).  The Alan guys there are a good company.  They also sell a kit that has the card, the power cable, and one of the nice HP 3.5" to 5.25" bay adapters shown below.  HP does not have any more of these cards.  The unopened boxes out of Russia...... not sure about that idea.

Make sure to not buy the earlier Renasus (NEC) one.... it has 2 ports on the back plate but does not have the 20 pin front header connector built in.  That header is a standard type used for USB3 attachments, and easy to see in the image below: 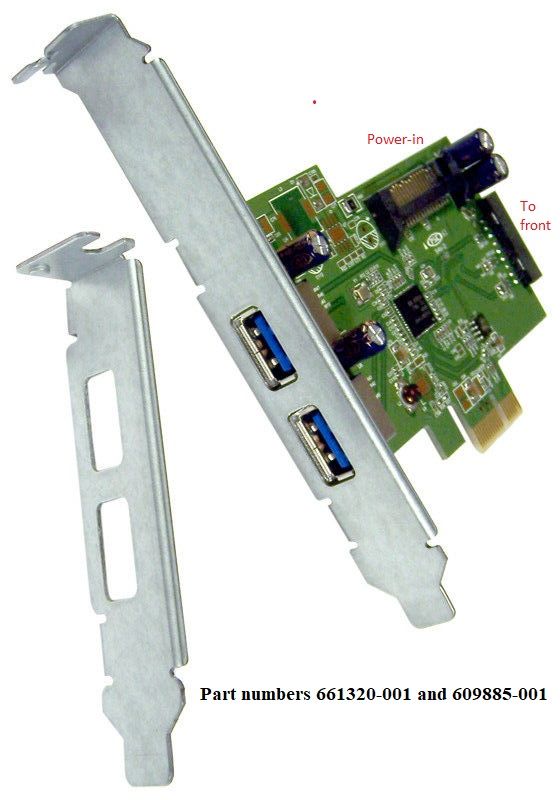 That is for putting the Akasa 3.5" form factor front USB3 ports device noted in my link above up front into one of your optical drive bays.  This fits all full size optical drive bays in any HP workstation.  Great quality.... 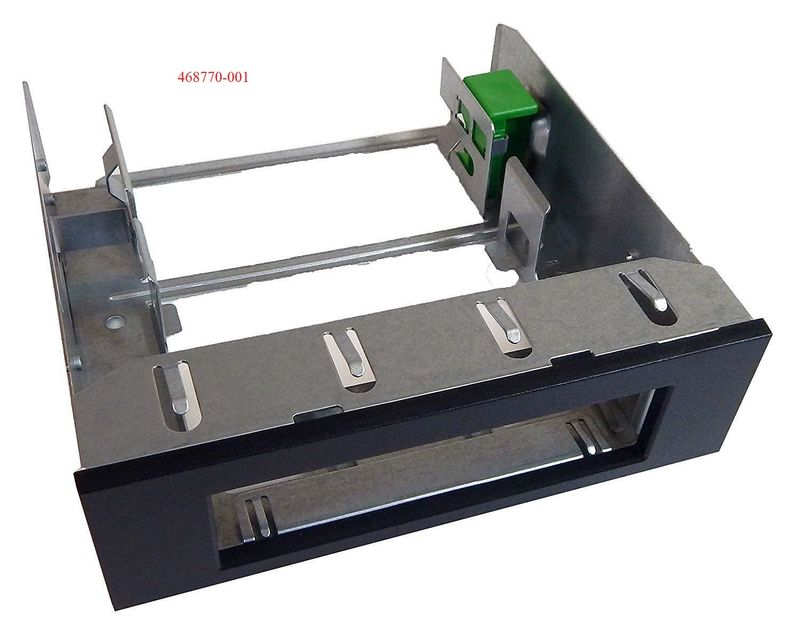