it's difficult to say 100% it will work without any issue.

Reading the Z840 Quick Specs I see that HP was supporting 1TB M.2 NVME SSD, so in theory even 2TB M.2 NMVE should work.

it's up to you if you want to the take the risk to buy such 2TB M.2 NVME SSD and after discover an issue.

Likelihood of success is very low.... there is a special HP firmware on the M.2 form factor drive.... it is not on the PCIe card.  Those M.2 drives on the ZTD I and II are HP modified.  Plus, there is the special BIOS features that HP built in to the motherboard so that the two types of firmware can work together..

yes, the z840 (and newer) fully support the nvme spec and can boot a system from any nvme or SATA type ssd drive

while the HP drives use HP custom firmware, any Retail and most OEM SSD's will also work the main difference is that since HP wrote their firmware, they are aware of any bugs/issues and can either update the firmware or work around it and as such the HP drives are certified to work with ISV's software packages

the form factor only comes into play in regards to the physical size/form factor the system supports,... IE- not all systems have a m.2 connector, or room to mount a 3.5/2.5 in SSD

I agree with DGroves comments to proceed with caution and accept the possibility of a replacement not working and/or having poor performance.

Of course, if HP issues updated firmware for the current drive, that would help as well as the replacement may well be a newer version.

If time is a factor, consider that Z Turbo Drives retain their value very well and as prices have dropped on drives, it may be possible to buy a new, larger capacity MVMe and good quality M.2 PCIe card for a lesser total investment than adding a new drive to the Z Turbo card.  There are M.2 heatskink/thermal pads and PCIe cards with fans, but I seem to never hear mention of NVMe drives running hot these days. I am a great fan of the Z Turbo, but as new drives are reasonably prices and run cooler than was the case when the Z Turbo was new, an alternative is possible.  The I/O optimization and cooling solution of the Z Turbo is fantastic, but as drives progressed, I was able to buy a nearly new (2.1TB writes) Samsung 970EVO M.2 500GB NVMe for $100 and LT-120 PCIe card for $22 with extremely very good results: 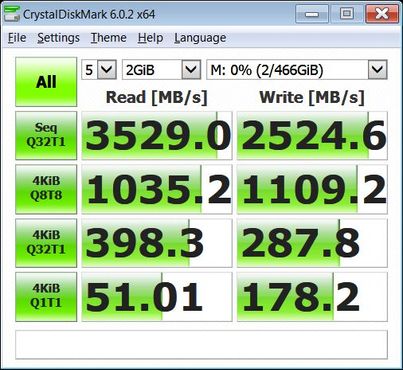 The Specifications from Samsung:

That drive is therefore running very slightly above the maximum spec on a system with a disk subsystem designed before the invention of NMVe drives. That drive is not under load at the moment, but is idling at 43C.

The 970 EVO has at least double the Z Turbo performance. Checking Ebahhh US today there is only one Z Turbo Drive 256GB G1 AHCI for $198.00.  that means that if I were replacing the Z Turbo with the Samsung 970EVO, I could be $+70. Unfortunately, the zX20 series WS's can not boot from NVMe without a fuss with adding a BIOS module.

If your second GPU x16 slot is open, you could add a quad M.2 card- it has to I/O divided, that is, capable of running each drive completely independently, with full performance.

IMPORTANT: for UEFI AHCI setup SSD drive must be formatted GPT NOT MBR

and my install was from Windows Pro USB stick

while you could do this, i'm curious as to why you want to replace a very fast boot SSD with a slower midrange one?

leave the fast ssd as the boot drive, and install the other in a pci-e m.2 card for use as a data drive