if i am having another 3 GPU Should i change the power supply ..?

Should i add any cooling system ..?

unless you have the upgraded power supply, multiple video cards will not be supported, and even with the upgraded supply your not going to be able to run three 3090's which would draw around 1000 watts and close to 1400 watts for 4

unless you have the upgraded power supply, multiple video cards will not be supported, and even with the upgraded supply your not going to be able to run three 3090's which would draw around 1000 watts and close to 1400 watts for 4

The applications listed present a combination of both CPU-intensive: 3D CAD, animation VRay, GPU-intensive: Lumion, memory, and drive intensive applications. This suggests that, for professional use, the system needs to be extremely capable in all departments: CPU- both single threaded and multi-threaded, GPU- a lot of CUDA cores/ high clock speeds, a lot of memory, and fast drives.

2.  Rendering is memory intensive. Configure the system with 128GB of DDR4-2666 RAM, but use modules sized to allow change to 256GB. NOTE: The 2666MHz RAM speed is the highest supported in a Z8. Workstations are particular about memory; consider using only HP-labelled RAM.

3.  A single RTX 3090 should be quite sufficient= 24GB GDDDR6X / 384-bit memory bus /10496 CUDA cores or consider 2X RTX 3080 =  20GB  GDDDR6X / 320-bit memory bus /17,408 CUDA cores.  There is a diminishing return on more than one GPU. One of the reasons to consider a single GPU is that, for one, the memory bus of the RTX 3090 is higher plus as far as I know, there is no blower fan cooler version of these GPU's, meaning quite a lot of extra heat will be put into the case over long rendering slogs and two of anything will probably cost more than one of the higher model. Regardless of choice, the Z8 will need to be run on a higher case fan profile to compensate and will be noisier. Be aware of the current very high cost and very low availability of any 3rd series RTX GPU's  due to cryptominers.  There is also the question of the size especially of the RTX 3090; there are models that extremely large W X L and some are almost 3X slot height.  NOTE: Verfiy that the exact model of GPU will fit in the Z8.

5.  Worksations are such carefully integrated designs adding liquid cooling beyond the HP proprietary models mean an external cooler. There is one such cooler available:

But these are difficult to find now and as is rather expensive. Forum friend Brian1965, whose is an engineer, designed and built a custom external cooler, and I had a go at some designs for z620_2, both horizontal and vertical:

I ended up buying an Alphacool Eiswand and then never using it after discovering that the optional HP z420 AIO liquid cooler works well in the z620 as well. 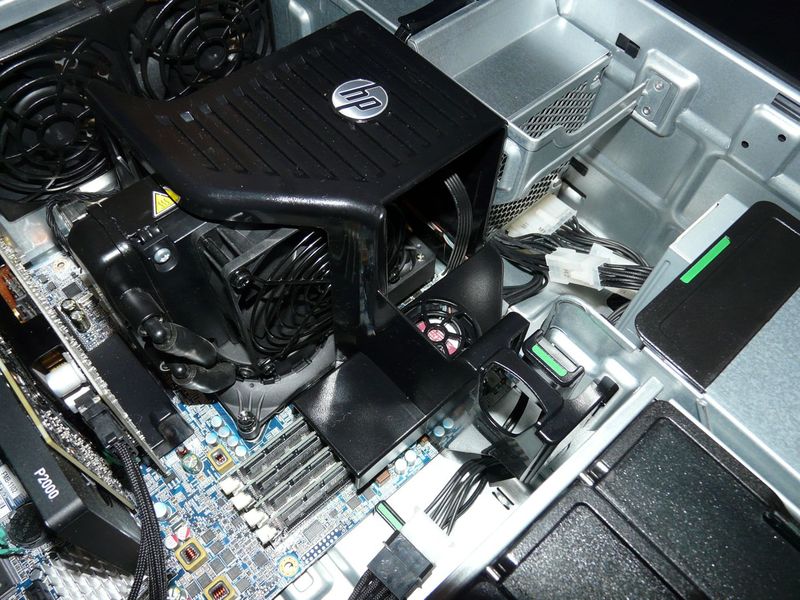 That however does not solve the GPU cooling which the external cooler will.

Accordingly, the 2933MHz RAM speed is now the highest supported in a Z8.