When the new ram is installed (in slots 1 & 3 as per originals) the RAM cooling fan runs flat out at approx 3000rpm continuously. It is far too noisy.

Speed Fan confirms that the new RAM runs approx 20-25 deg Celcius hotter that the original (2GB's) at approx 60-65 deg Celcius. I've confirmed this by installing both the new and old ram at the same time to check..

When I reinstall the original 2GB (2 x 1GB) the fan slows down, RAM temp stays approx 40 deg Celcius and the machine is quiet once again.

My questions are:
Why does my new RAM run as hot without load (no applications running)?
Why does my fan run flat out (obviously because it's hot)?
What can I do to upgrade my RAM without the FAN running flat out and my workstation being to noisy?

HP Recommended
Another Question too...
Can you run unbuffered RAM in the xw6400?
I've read this doesn't get as hot.

Can you run unbuffered RAM in the xw6400?

The xw6400 and xw6600 use Fully Buffered DIMMs (FB-DIMM).  This technology has an advanced memory buffer (AMB) which serializes the memory signals on the DIMM's memory chips and sends the data as a serial stream(s) to the system.  FB-DIMMs are very different than unbuffered RAM or Registered DIMMs (also commonly called buffered DIMMs) used on later systems.

FB-DIMMs were used only on the xw6400, xw6600, xw8400, and xw8600.  The unbuffered and registered memory used in later systems is incompatible, and keyed (notched) differently, so they cannot be installed in the xw6400.

Please click "Accept as Solution" if you problem was solved. This helps other forum readers.
Was this reply helpful? Yes No

HP Recommended
Ok, thanks for confirming unbuffered RAM is incompatible.

From what I've read there is no way to control fan speed either via the BIOS or Speed Fan on the xw6400.

I've been playing around with different combinations of RAM over the last few days, and the more I add the noisier/faster the memory fan is. Anything over 4GB ram is to noisy for my small office.

Does more RAM generally mean more cooling is required?
Was this reply helpful? Yes No

I like the free version of HWMonitor from CPUID.com for such probing.  Here are the results from one of my testbed xw6400 workstations with two of the fastest processors HP certified for it (E5345, SLAEJ sSpec code).  And, 16GB of memory in the 4 slots as 4x4.... HP memory is all I use.  I work off of this box, amongst others.  The memory is used, off eBay, and now has become quite reasonable in price even for 4GB HP sticks.

I'll get you the Assembly P/N tomorrow for those.

With W7Pro64 or W10Pro64AU that workstation still is excellent.  There is a BIOS setting for fan speed but its default is down at the lowest value.

I have not seen fan speed go up with more memory on any recent builds on the xw6400, and make sure you are using the latest BIOS.  I have seen bad thermisitors in the front on/off cable force the motherboard to detect danger and ramp up the fan speed, but that is a big ramp-up, and is fixed with a cable replacement, and it has not been related to amount of memory present.  I used to think otherwise but have not seen that in practice for years now.

16GB of HP memory gets the job done that I need this workstation to do..... with breathing room to spare.  My main point is that HP builds workstations that have a long life in them.  I continue to be highly impressed with the xw6400 as long as it is running 2 x E5345 SLAEJ, and 8 or 16GB of HP RAM, and the Intel SATA Gen II SSDs I have posted about in 160GB or 300GB form.  Then, there are the proper BIOS settings, and on.  The information is all in here, which is quite handy.

Since there only are 4 memory slots for the xw6400 if you're going to soup one of these up these days I'd go for 16GB by 4x4GB.  HP sticks are generally "binned" for higher than baseline performance for each stick.  That is why I'm sticking with HP memory with their hologram sticker on it.

Thanks for the feedback SHD. 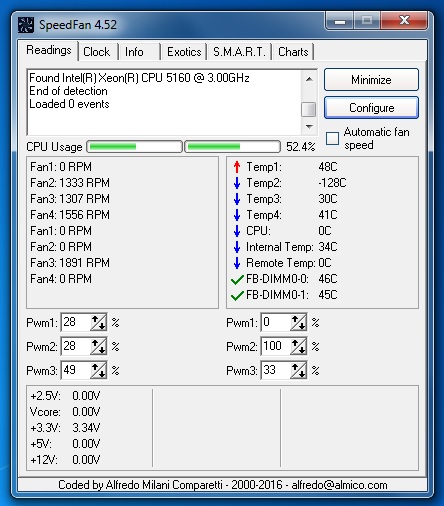 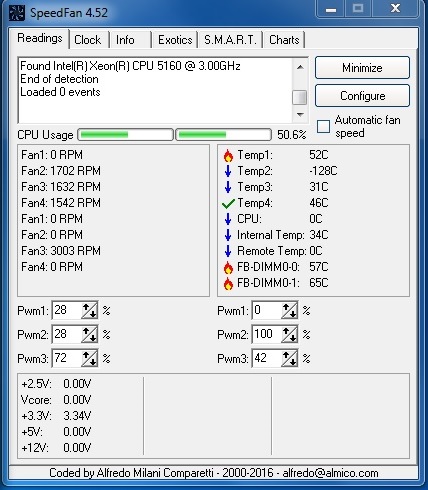 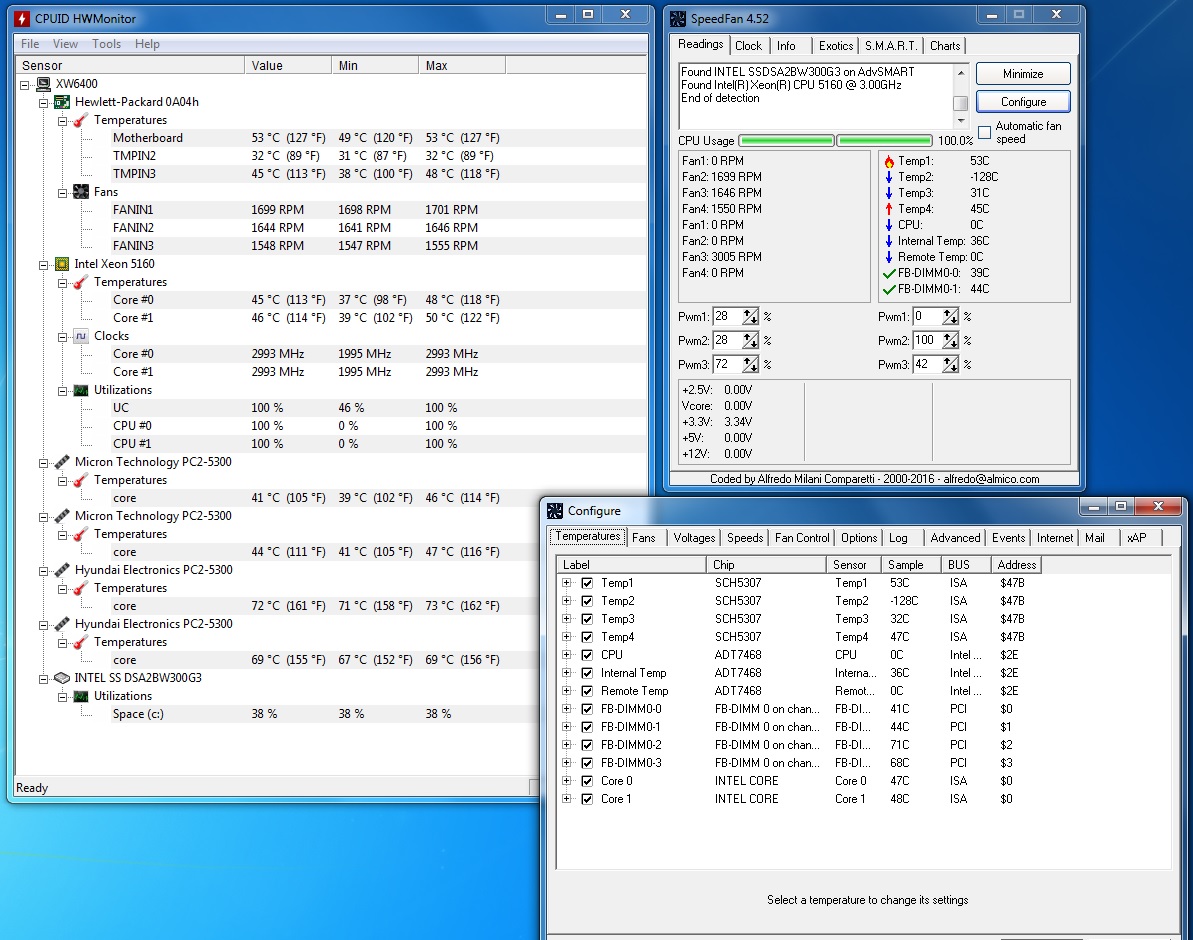 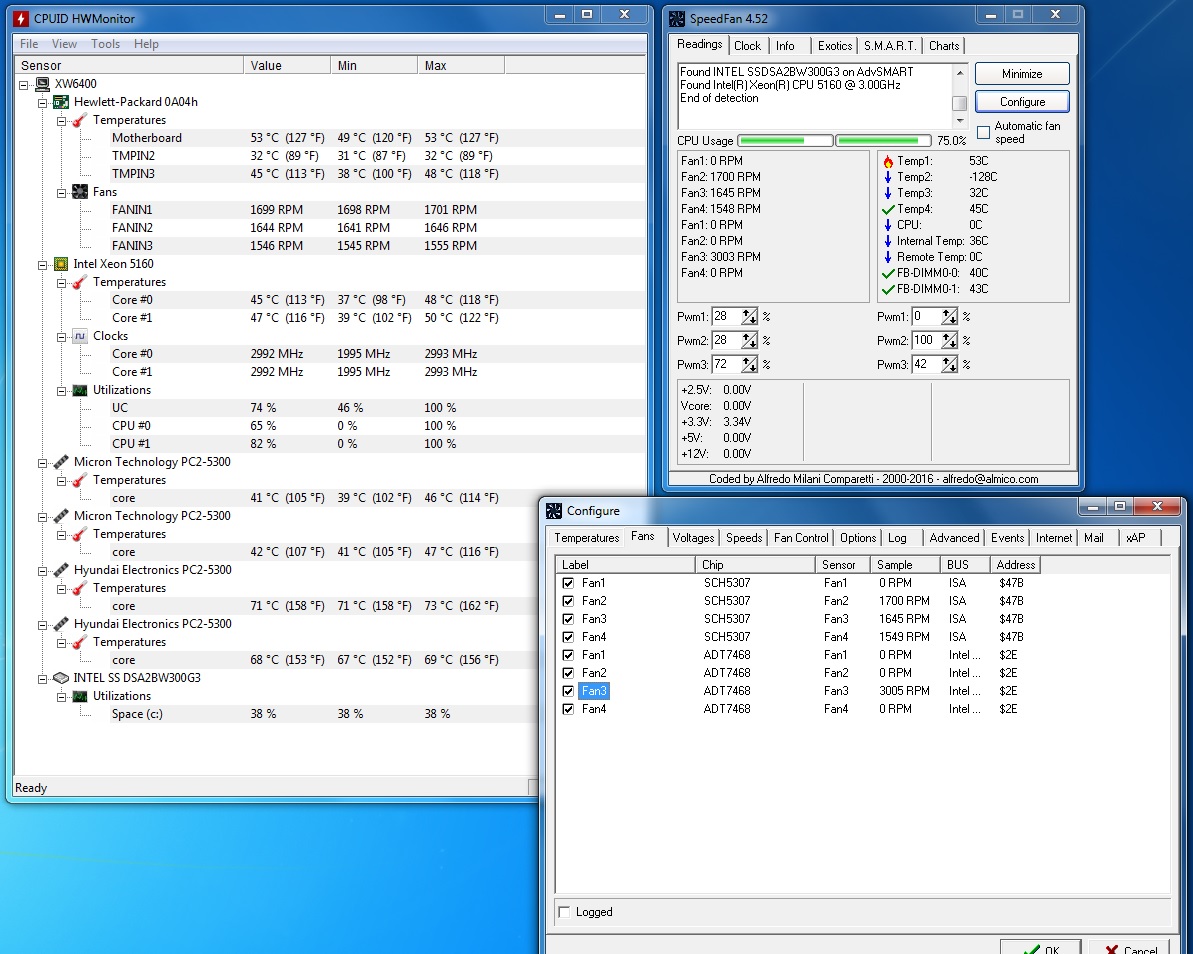 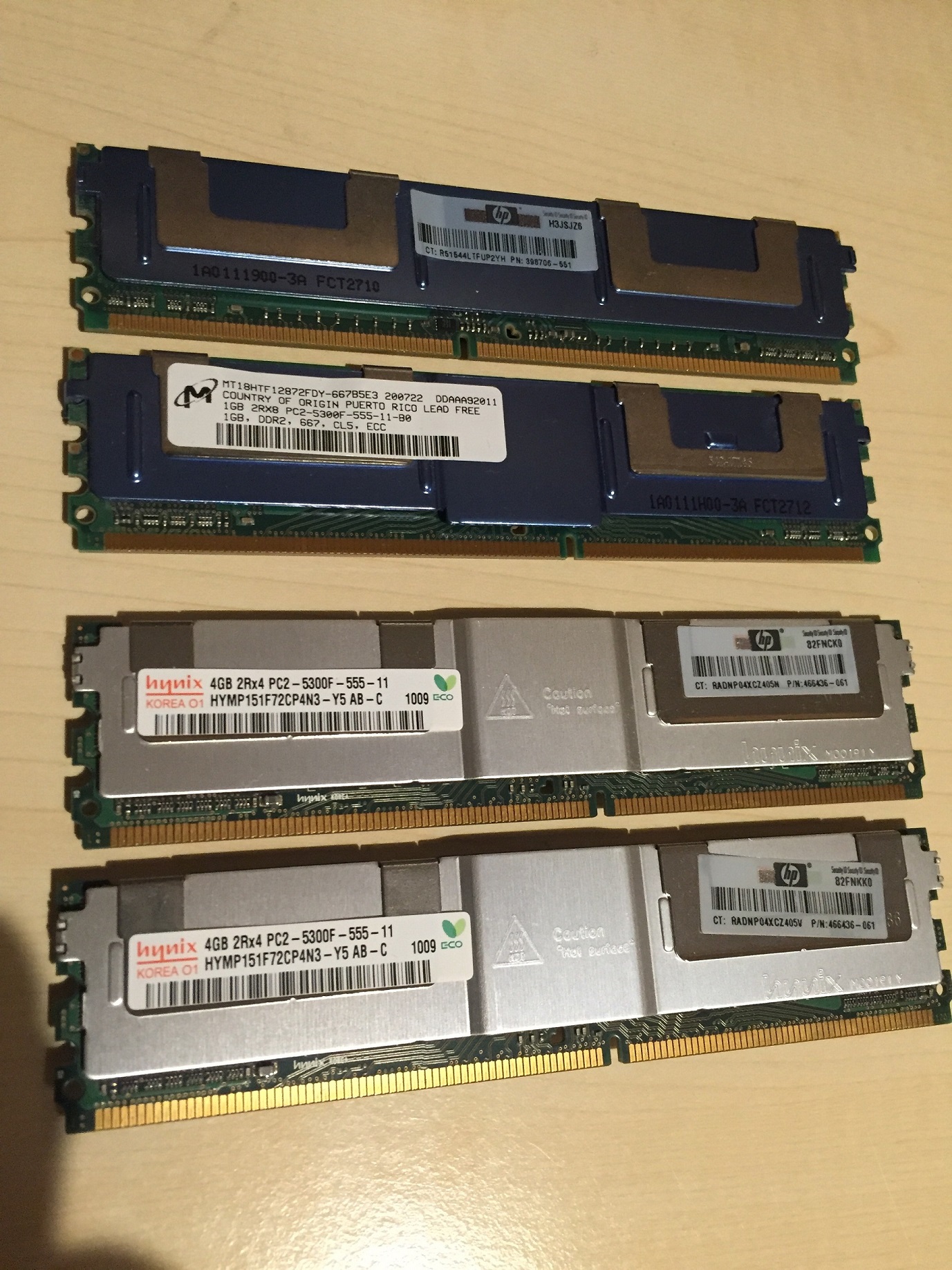 As you can see with the new 8GB of RAM installed Memory Fan Speed increases from 1800rpm to 3000rpm (too noisy), and the 4GB RAM modules run at a much higher temp (presumably causing the increased fan speed).

In Summary.... Are the increased temperatures and fan speeds normal?

For your info I've also updated the BIOS to the latest version v02.38, and installed an Intel 320 series 300GB SSD.

If I can get to the bottom of the issue above I intend to fit a second Xeon 5160 processor.

HP Recommended
Hi,
I Have XW6400 Workstation Running On Windows 10 pro operating system and I bought 8GB (2 x 4GB) of DDR2 PC2-5300F 667Mhz EEC Fully Buffered RAM to upgrade and replace my original 2GB (2 x 1GB) of RAM.
When i Installed 2x4GB sticks on 1 & 3 slot the system didn't boot up and was indicating RED LED.
Again I installed with all the 4 slots keeping 2x4GB in 1 & 3 and 2x1GB in slot 2 & 4 the system booted up Normally.
The issue what I'm facing is out of this 10GB.8GB has been Hardware reserved and only 2GB is available for physical use.
So,I Wanted to keep my physical memory higher than the Hardware Reserved One.
My BIOS version is also updated to 02.38.
Kindly please help me Resolving this issue.

I've got this workstation as well, with 2 CPU's, it's working perfectly except fot the issue I cannot find an answer how to resolve. Fans constantly running, it seems that none of the replies we get answer our question, why does the memory get so hot? My cips hover from 54 deg. to 58 deg. C. Are there memory chips I can use to replace the ones I have that would not get so hot? What does the temp. of the memory depend on, brand, size?

first, keep in mind that 512k and 1Gig FBDimms will run a bit cooler than larger sized dimms, next all fbdimms from HP and Dell that were for server use will have full metal heatsinks covering the entire module and i think this was also the case for the workstation line

it is possible on the xw8400 only to install 800mhz dimms, and a 1066 mhz FSB cpu and then cover two pins on the cpu and force a 1333 bus speed i did this on my two 3.2mhz dual core cpu's and got almost 4ghz speed which was stable

BSEL pins 2 & 1 on the cpu need to be covered with tape these ar on the edge of the cpu, so they are easy to cover using kapton tape