Hi all,
My z820 kept having thermal shutdown in the past week with temperature showing more than 90 Celcius, sometimes even without any loading (just right after startup). Going through web and found some post on the similar problem faced on this model (with Xeon E5-2687W CPU), especially 2 on this community posted by Forgottenrebel and Manchicken. Its good to know that the newer Z cooler can fit in z820, since the original AIO cooler of z820 was no longer available officially. However I do have a question on the air shroud compatibility: does the air shroud of z820 match with Z cooler?
Thanks

the same air shroud/cpu coolers can be interchanged between the z820/z840 they will interchange without any issues and are identical parts and as "SHD" has mentioned the z840's new upgraded cpu cooler can also be installed on the z820 in place of the water based AIO which is no longer available new and the 3 pin cable is not used on the z820 so simply tuck it out of the way.

In answer to your question I'd contact one of the forum members here who has done this modification and ask them, via the internal messaging system of the forum, and then let us know.  Or, enter a question into one of the threads describing the modification and hope they read and reply.  You're simply asking that if you do this will your Z820 go back together like it did before.  I'd say yes, but have not personally done this mod yet.

You may have seen in a related recent post that the Z840 Vapor cooler has two bonded ground wires attached to the base of each cooler that then feeds out to a white 3-pin plug end, which attaches to a 3-pin header on the Z840 motherboard... one 3-pin header for each Vapor cooler.  Those headers are noted in the Z840 manual.  That thread is  HERE  and note that only pin 1 and pin 3 are used at each header.  Ground continuity is established to the motherboard of the Z840 this way so it knows that a Vapor cooler is attached rather than a stock cooler.  I'd guess that the Vapor cooler has about twice the cooling capacity of the stock cooler.

The two Z820 3-pin headers for the optional powered liquid coolers appear to be wired differently because they need to feed power to those liquid coolers.  The Z840 Vapor coolers don't need power, and their wiring seems to imply that pins 1 and 3 just are for ground continuity to let the Z840 motherboard know that they are present so it can activate a different cooling profile based on that.  Socket 2 in the middle of the Vapor cooler has no wire attached to it at the white plug end.

Thus, if you choose to do the mod of using the Z840 optional Vapor coolers in your Z820 I would not attach their ground leads to the Z820 3-pin powered motherboard headers... you would risk shorting out something in the motherboard.  Here are some pictures of the Z820 motherboard, schematic from the manual, and a Z820 liquid cooler: 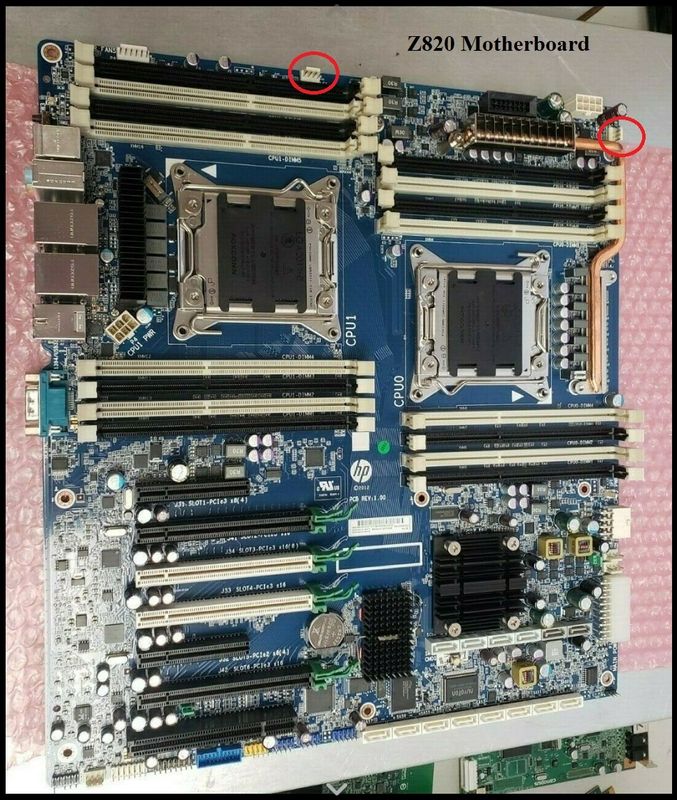 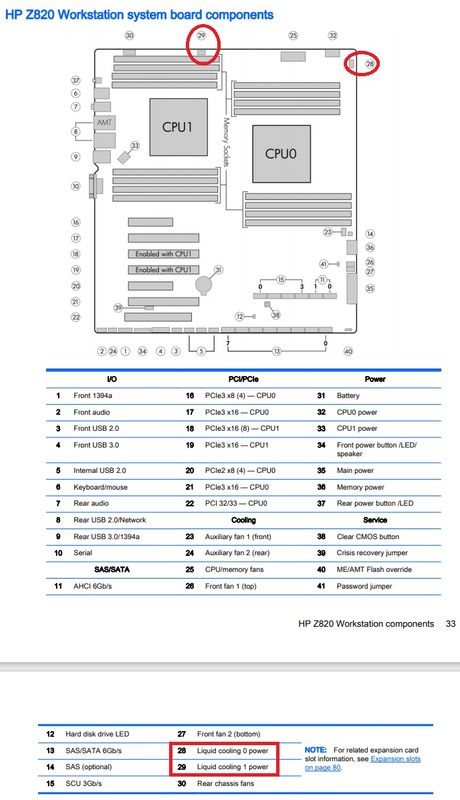 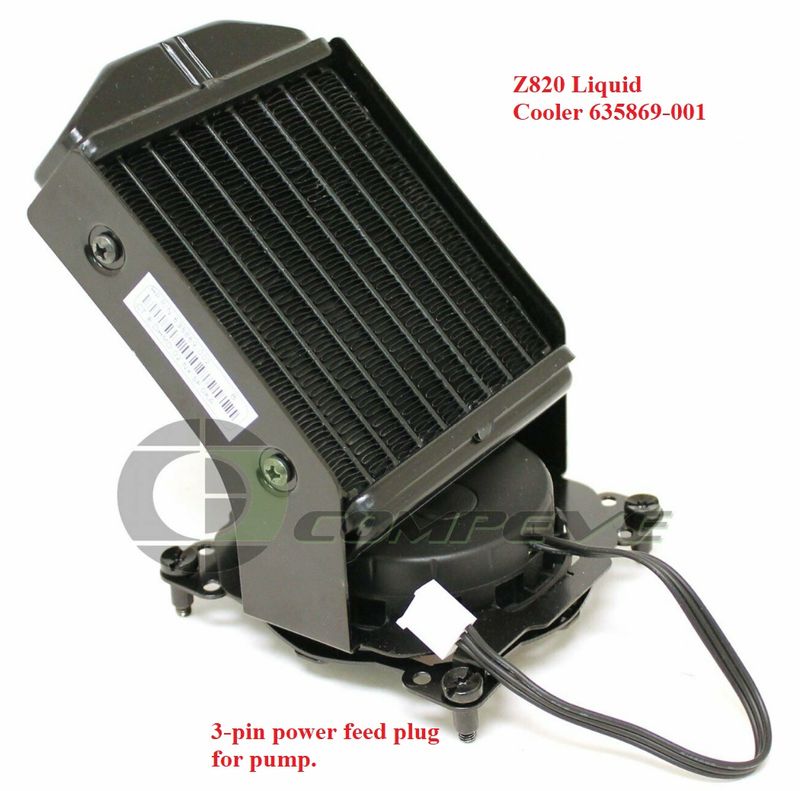 Thanks for the reply and all the information. Truly appreciated 😄
I did post my question on one of the post where this problem was discussed, however I got no reply from the OP so am thinking of opening a new thread to get help.
May I know how to access the IM system of this forum? I'm new to this forum and couldn't find the IM option under user profile, hence made a new thread.
Again thanks and looking forward for your reply.

Pin.... you need to be logged in with  your personal LO/PW first.   Then go to forum first page and you'll see an envelope icon top right area, beneath the search bar.  Click on the envelope.... it is pretty intuitive from that point on.

Again thanks for the reply. I can't find the envelope icon btw. Below the view of my forum first page: 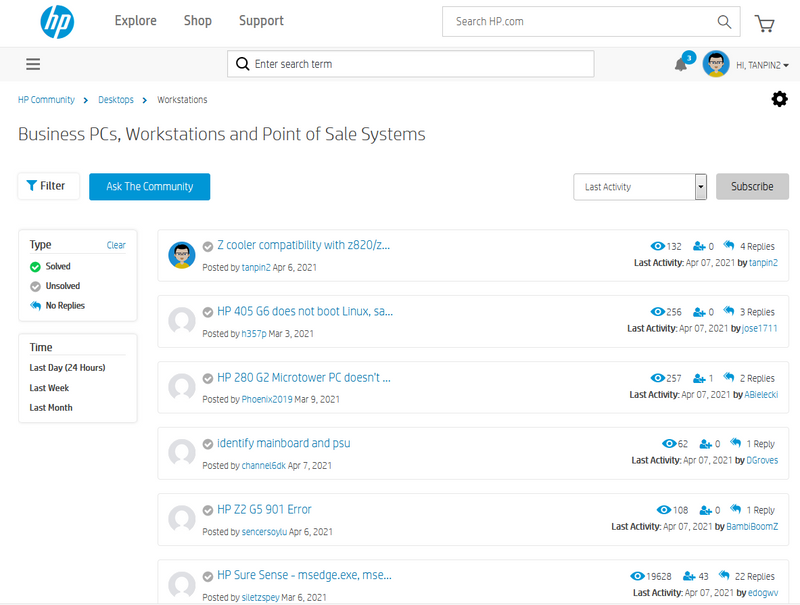 Anyway I managed to get in touch with local spare parts supplier for HP workstations (those out of warranty). Will see if they can provide a Z cooler for me to test out. There's another z840 (with normal heatsink) in the office so even if it doesn't fit in my z820 it can still be backup for z840. Will update the status. Thanks

My z820 kept having thermal shutdown in the past week with temperature showing more than 90 Celcius, sometimes even without any loading

the same air shroud/cpu coolers can be interchanged between the z820/z840 they will interchange without any issues and are identical parts and as "SHD" has mentioned the z840's new upgraded cpu cooler can also be installed on the z820 in place of the water based AIO which is no longer available new and the 3 pin cable is not used on the z820 so simply tuck it out of the way.

Mine the same. Before looking for the Z cooler, I actually did reapply the thermal paste, clean all the cooler/fans, even change the main fan in the air shroud. Changing the thermal paste last only 1-2days before it returned to same problem, and same goes for the change of fan at air shroud as well. Sorry I didn't brought this up in initial post.

btw, some update : I'm currently getting a new Z workstation, and apparently HP is having some tough time fulfilling order due to COVID19, and they can't even give a quotation after few weeks. Worst still, ETA for new workstation goes all the way to August. About the Z cooler, the sales person told me that the product was already end-of-life and they can't supply one. Same goes to their 3rd party spare parts reseller. Not sure if this is also due to high demand of PCs and they've no time to entertain small business...maybe I'll just visit some electronics mall to see if they've any salvaged parts from scrapped machine.

Again thanks everyone for the help and reply.

About the Z cooler, the sales person told me that the product was already end-of-life and they can't supply one.