I would like to know how i can fit a normal 4 pin PWM heatsink fan on the 5 pin of the  HP Z2 Tower G5 Workstation. I have heard things about using the original 5 pin and rewire the fan from 4 to 5 pin, but how?

If i connect a 4 pin PWM heatsink fan at reboot i have a BIOS issue.

Thank you in advance,

it's not that hard to pin out using a multimeter...................... the ground pin is easy simply connect one probe to a motherboard ground then touch the other probe to the fan pins one at a time using the continuity mode

now test pin 5 to pin 1(should be ground)

the remaining two can be found by powering on the system, connecting the gnd/pwr leads from the fan to the fan header

and then connect the last two,  if the fan does not spin up/down on a reboot reverse the two leads (pins 3/4)

for older workstations the 5 pin connector was a std 4 pin pwm pinout with a wire that ran from the black ground at one end to the other end........ IE- pins 1 and 5 were connected together

i'm not sure the z workstation line follows this however

Not sure what you are trying to do.... upgrade your processor to a hotter one and trying to find the right heatsink/fan?

From the QuickSpecs for your workstation the hottest processors run at 125 max TDP, and those require use of the highest cooling capacity heatsink/fan ("Performance") kit HP makes for that workstation:

From a search in HP Part Surfer finding one that runs the hottest processor:

The ones with the camera icon let you capture an image of the product: 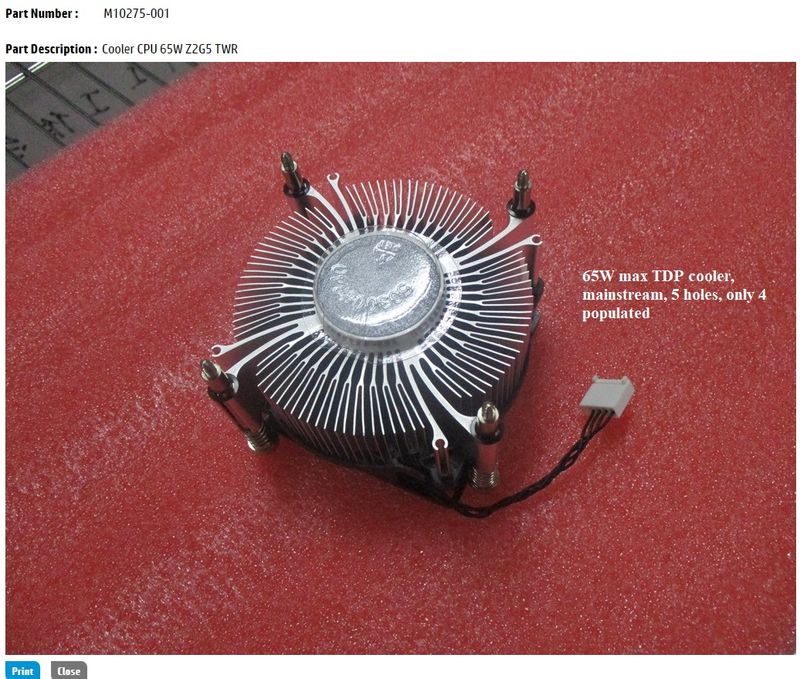 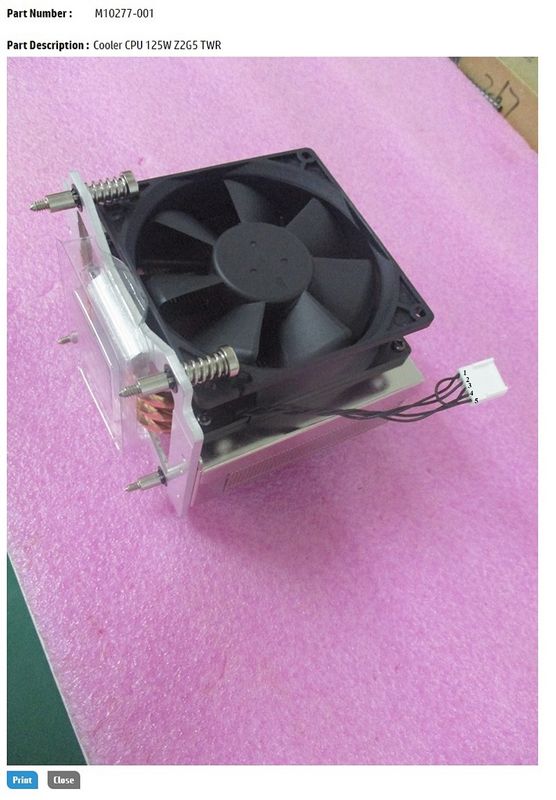 That lower cooling capacity heatsink/fan pic shows a 5-hole plug with standard 4-wire PWM pinout as usual from HP feeding to/from the fan/motherboard in the case of a "Mainstream" heatsink/fan.  That looks like a standard Intel-made heatsink/fan being used.  The motherboard header has 5 pins, and only pins 1-4 are used in this case.

HP very carefully matches the PWM fans they choose to the workstation and its processor.  Using a low slow Noctua PWM fan in place of what HP picks is asking for trouble because low slow then gets lower and slower as the carefully programmed HP PWM motherboard control system gets applied atop a different PWM fan than HP intended.  Again not so wise.

If you are souping up your workstation with a hotter faster processor you may wish to add in a front "PCIe" cooling fan/metal fan holder which also is listed in the Part Surfer... it is not stated in the QuickSpecs to be required, however for 125W processors.  It has HP option part number of 2B1D4AA.

Agree with your final statement about sticking with the HP heatsink/fan.

Disagree with where the ground jumper goes... some would say it goes to pin 3 instead.  It is a pretty poor picture from HP but I'll bet you a beer it goes from pin 1 to pin 5 just like in the past.  I had access to the original picture and zoomed in and adjusted contrast ratios to see the very best I could.

next time i go to a client that has a newer "Z2" G5 series model with the performance fan i'll see if can remember to check the fan wiring, while i also think the pin 1 to 5 would be the correct one as i know for a fact that the Z8 G4 cooler/fan connector DOES use Pin 1 to pin 5 ground jumper, with pins 1 through 4 being the normal PWM pinout (see attached pict)

i looked at SDH's fan picture again for the z2 G5 tower heatsink and i stand corrected, "sdh" is correct, the jumper wire does go from pin one to pin three in his picture

so it appears that the z2 G5 tower cooler is unique in it's wiring in that it does not follow the older workstation lines,

pin one to pin five for a high performance fan/cooler

For DGroves... I said "some" would view that picture as the ground jumper going from pin 1 to pin 3.  I personally saw it as pin 1 to pin 5 when I zoomed in on the original  picture on the HP PartSurfer page and played with the contrast settings a bit.  The other secondary evidence is that plug hole 5 is clearly empty on the "Mainstream" 5-hole plug end for the 4-wire version.  Dark beer due pretty soon...

For the OP... Here is a picture from when HP was using colored wires... HP has shifted to all black wires more recently: 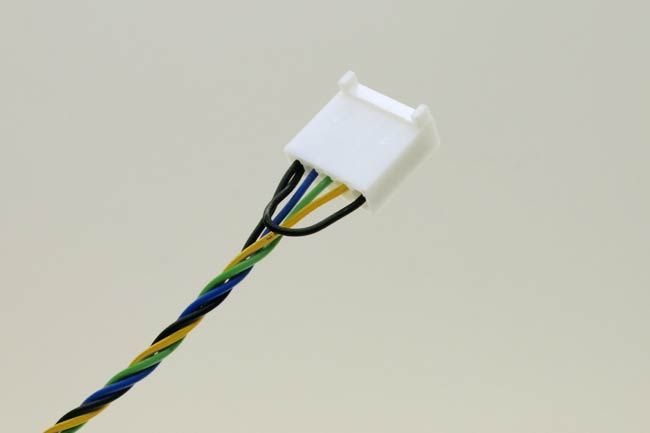 Here is a google reference, but note that different vendors use different colors on the same wires, so the color code is not a standard.  The order of the wires is, however for the first 4.  HP has never varied from that standard, shown below.  You can tell which is hole #1 in the fan's plug end by its orientation to the side ridges built into the plug.  You can see pin 1 on the left in the picture above, and the jumper from 1 to 5, and the little orientation ridges sticking out.  Hold any PWM plug end so the ridges are on the side pointing at your face and pin 1 will always be the first one on the left.  Once you know that then you need to figure out what is pin 1 on your motherboard PWM headers.

A good machine but with a big design problem!

The case is small and the CPU cooling system is absolutely inefficient. When the CPU is under stress, that is, when it is engaged in video reversal or rendering, it easily reaches 90-95 degrees and only then does the fan system intervene to lower the temperature.

A continuous up and down that stresses, in my opinion, the CPU!

The cooling system used by HP is a low cost 3 heatpipe with 1 fan .... I would like to try to change the cooling system to a Noctua with 4 or 6 heatpipes with 2 fans (but I see it hard due to the size in height) or radically use a liquid cooling system.

All systems on the market have 4-pin PWM control and here is why I am asking for information to be able to create an efficient 4 to 5-pin converter.