We just got a few Z240 Xeon workstations so that we could run multiple monitors on each. I put in an aftermarket video card in the first one, and the power supply looked too weak to support it, even though the graphics card doesn't have a separate power input.

What standard is this? How am I supposed to replace the power supply? If I can't figure out this abortion, we're returning the whole batch and getting Dell desktops instead.

Thanks for your Post on HP forum. First of all congratulation on your New Machines. I really appriciate your DIY attitude towards your machines and also the knowledge about it.

I would suggest you to please get a 20pin to 24 pin convertor and you can run the PC with you older PSU from the stock. Or else you might have to get the compatible version of PSU.

Also choosing a brand is your choice and as far as the technology about pins and ports, it remain same with any other brands too.

I dont know about other brands but by choosing HP, you're making a right decision, Trust Me.

I'm familiar with the 20pin standard connector, but this is nothing like that:

As you can see from the picture, thre are separate smaller plugs going into the motherboard from the power supply. There is a 3x2 and a 1x6 (all the colored wires).

Thanks for your reply and appreciation... Its the latest version of PSU, its a micro ATX PSU what is come and the one with 24 pins you are talking about is Old version, ATX.

I really doubt if it even fits in to new version of PSU case.....

We can find 24 to 20 pin convertor but d as far as the adapter for Micro ATX, we dont have anything from HP and I struggled a lot with different 3rd party products, looks like the chances are slim.

The ultimate option/resolution looks like, upgrading to a higher version of Micro ATX to your requirement.

Thank you for the information. Is this some proprietary HP system or is it standards-compliant? I am unable to find any power supply with this layout, or even an adapter.

Is there an upgraded HP power supply available? It is amazing to me that we purchased tower units, and they are not even capable of taking a video card that draws slightly more power. Plus, why would you use a micro ATX power supply in a tower?? Unbelievably bad design.

Again according to the specs, both workstation can support up to a Quadro m4000 which can suck 120W when working hard. Presumably to use such a card, you would need the gruntier 400W PSU for the tower or gruntier 240W for the SFF workstation. I'd also assume that these PSU's would include an auxilary graphics power connector.

But you haven't indicated what PSU came with your systems in your posts, only that "the power supply looked too weak to support it".

Since your aftermarket video card does not have provision for an auxuilary power connector, it would be only fed from the PCIe slot which by design can provide maximum of 75W. As such, i'd be surprised if the lower output 280W tower PSU or 200W SFF PSU couldn't supply the needs of a 75W graphics card. So in reality, it looks to me that your z240's can actually meet the needs of your aftermarket video card and that the PSU is not "weak".

I guess the question could be what PSU's came with your tower workstation? Then others with more knowledge of z240 can answer whether your chosen aftermarket video card will work on your z240. Then you may have found out that the workstations would actually meet your needs and there is/was no reason to return them.

However, if your concern was purely with the fact that the z240 tower used a PSU different from the ATX PSU's you have in your spare parts store, then that's a different kettle of fish. And i wish such concerns were more widespread.

Me, i don't like non standard components. Worse still are standard looking components like ATX looking PSUs where the connectors are wired up in non standard way - which can catch you out. That's why i like connector pin out diagrams which most vendors no longer provide. My z210 Maintenance and Serives Guide does but the newer z240 Maintenance and Serives Guide does not. Seems HP hass slipped here...to our detriment...

As to what PSU standards exist, there are many. And in my experiance, HP PSU's, though they may be a little different from the ATX ones i have been exposed to, they are built better and are more robust than the standard of the shelf stuff i've seen. For example, just look at the HP PSU label and you may see that they provide more current for some of their outputs as compared to a same wattage standard ATX PSU that exist which allows 6 pin PEG to 2x 6pin PEG adapters to be used in some systems.

But if your issue is reducing spare parts inventory, your concerns are upderstandable. Just make sure your replacement workstations actually use a true ATX standard and the OEM hasn't fiddled with connector pinouts. Good luck in finding that information

Based on the pictures, it looks like this will work. It's been 8 months since we ordered those work stations, so we have shipped the lot back to HP and gone with different models. We have zero interest in this proprietary over-engineered rubbish, when a $60 power supply off the shelf would meet all our needs.

It is also amazing to me that not only does an HP employee not know about this adapter, but they don't even know how the power supplies work.

However even after modiffications it will just give you en 12V power on motherboard with issue of whole time spinning all fans what even can just because motherboard have power.

For modifikation you have to remake en plug. In place of green wire you have to put yellow and yellow in place where was green before replacement. I've been trying with other wires but it seems to that them do not have to be connected because them do not affect anything.

As i said i got problem with constant power on my motherboard even when my system is shutted down so all fans wil work annyway. For now the only solution for this for me is to switch off whole power supply. 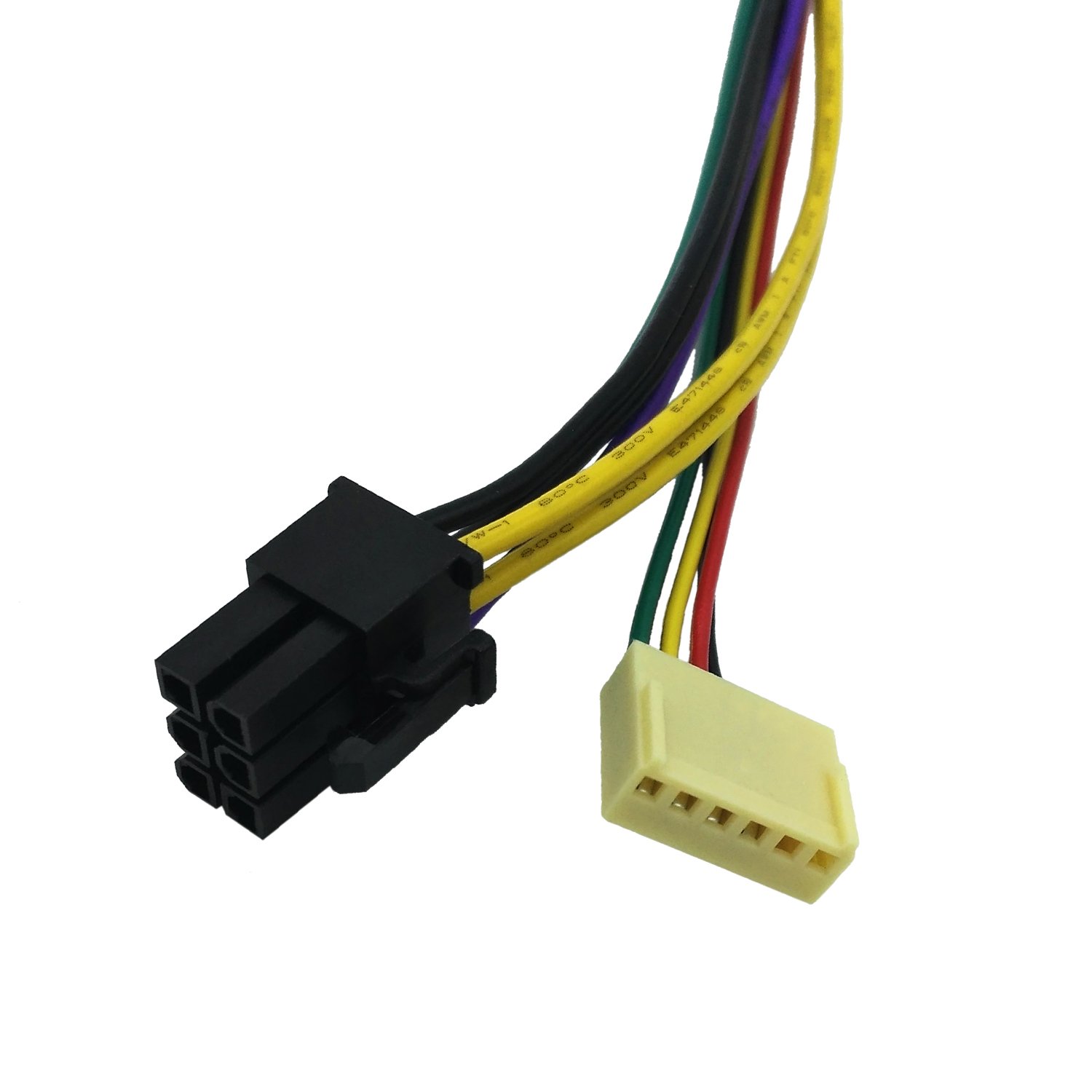 So modiffication one more time just switch green and yellow wire places. At least it works for me.